Where to Stay in Brooklyn: Best Areas and Hotels

Home / The Best Areas to Stay in New York City: Top Districts and Hotels / Where to Stay in...

Brooklyn forms, along with Queens, Coney Island, the Bronx and Manhattan, the five boroughs or districts of the city of New York, considered the “capital of the world” and one of the destinations that can not be missed in the list of any traveler.

The Mecca of street art enjoys tourist attractions such as the Prospect Park, the famous Brooklyn Bridge and an industrial past that, with the arrival of artists and students, filled the borough with a bohemian vibe. In addition, activities such as brunches on the rooftops overlooking Manhattan have become increasingly popular for those who visit the Big Apple.

The main transport system in Brooklyn is the subway and, if you plan to use it frequently, it is recommended to get a Metrocard. Similarly, it is also possible to move to other boroughs using bus, ferry or taxi, although there is a risk of getting stuck in traffic.

On the other hand, the Downtown is the best area to stay in Brooklyn if you want a central location and to be close to the main attractions of this picturesque borough (See hotels in Downtown Brooklyn).

The best hotels to stay in Brooklyn

Hostels and cheap stays in Brooklyn

Would you like independence? Book an apartment in Brooklyn

Inns, B&Bs and guest houses in several areas around Brooklyn

The Best Areas to Stay in Brooklyn, NYC

Williamsburg is located north of Brooklyn and borders Greenpoint, Bedford-Stuyvesant and Bushwick.

This borough is known for its contrast. On one hand, it offers a different atmosphere of lively nightlife, vintage stores and craft markets that make it one of New York’s hipsters neighborhoods On the other, it’s known as a neighborhood of Orthodox Jews.

It has attractions such as the Williamsburg Bridge, shopping centers, the beer garden on the rooftop of Berry Park and a fabulous variety of food.

Williamsburg is an avant-garde community with exclusive design hotels, so its cost is somewhat high. However, this is one of the best areas to stay in Brooklyn to discover the alternative side of New York.

Moving in Williamsburg is possible through Metro Line L and by ferry. 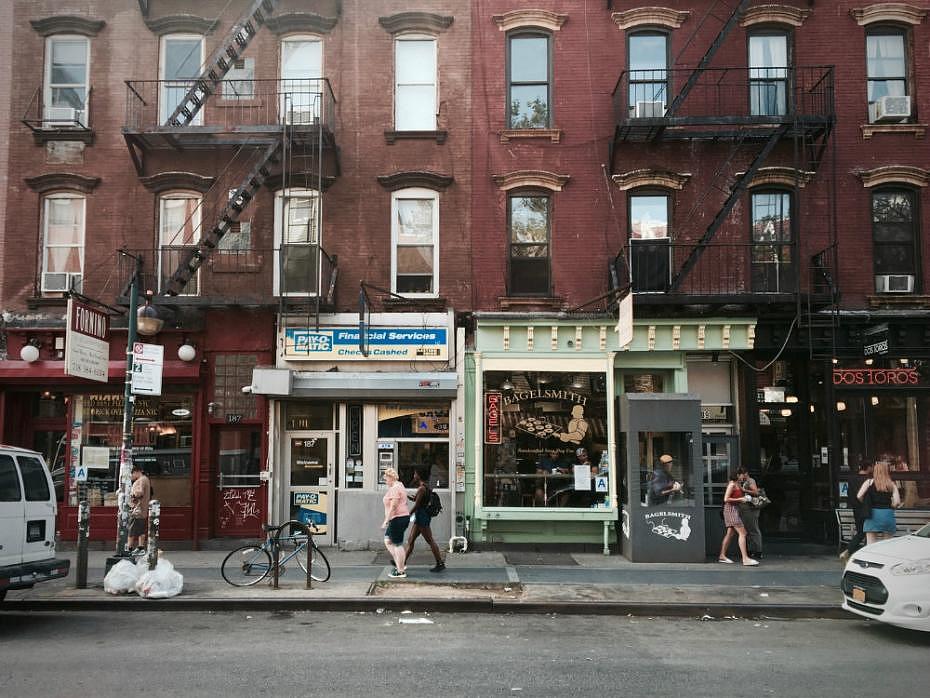 Brooklyn – Williamsburg – Click here to see all hotels on a map

Brooklyn Heights is located northwest of Brooklyn, between Atlantic Avenue and Clinton Street.

It is known as the first suburb of the United States and one of the upper-class residential areas with the best views of Manhattan.

This area is famours for its reddish stone facades called “brownstones“. In addition, it has the Brooklyn Heights Promenade, a riverwalk along the East River.

It is the ideal place for those who want to stay near Manhattan, in one of the best connected areas in Brooklyn. 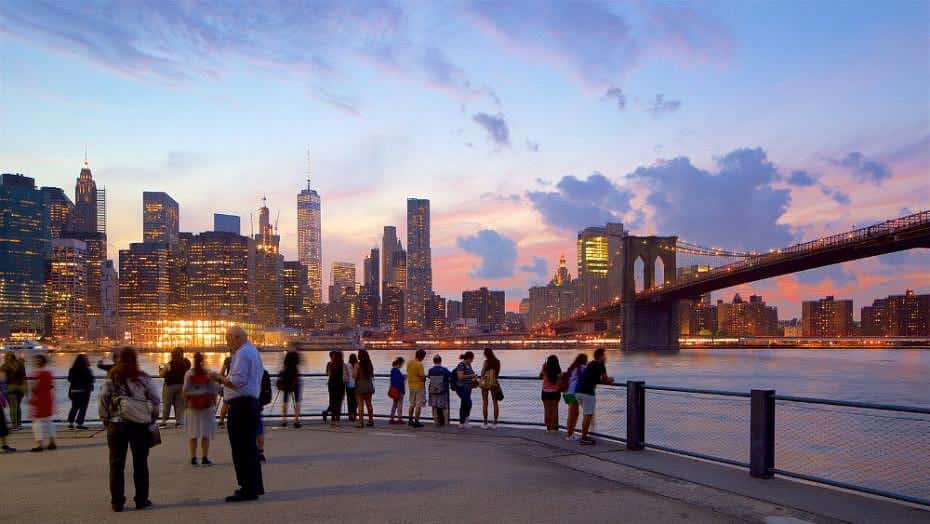 Downtown is located northwest of Brooklyn, east of Court St and west of Flatbush.

In addition, it borders the East River on the north and Atlantic Av on the south.

This area is surrounded by office buildings and apartments.

Its central location allows easy access to anywhere in Brooklyn through the subway.

The Burrough Hall stations (lines 2, 3, 4 and 5), Jay St-Burrough Hall (lines A, C and F) and Court St (lines M and R) connect the area with the rest of the borough.

Downtown Brooklyn is the best area to stay in Brooklyn for shopping due to its discounted stores or department stores. 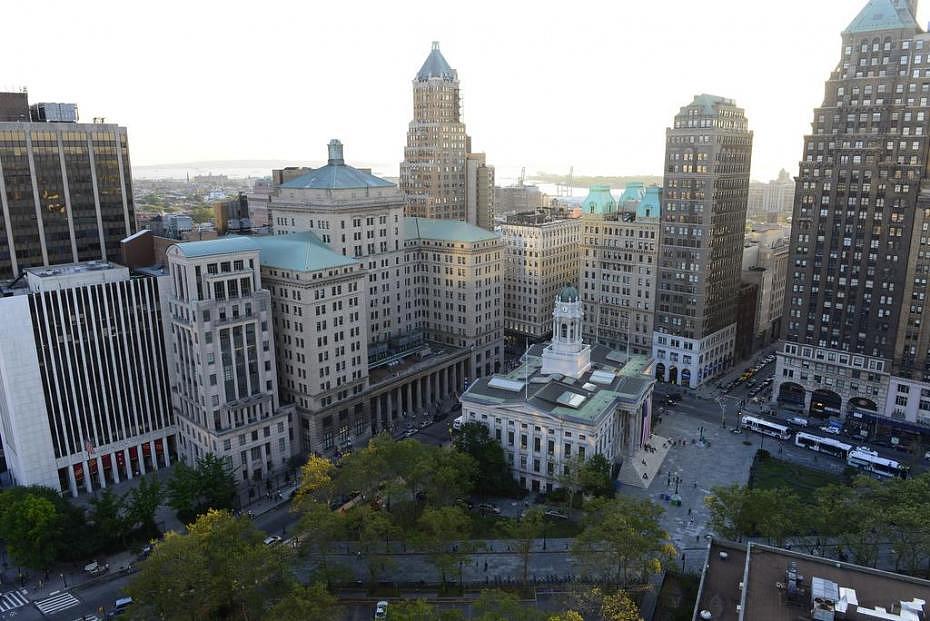 Brooklyn – Downtown – Click here to see all hotels on a map

Bushwick is located northeast of Brooklyn and is known as an ethnic neighborhood whose population is mostly Hispanic American.

In the eccentric Bushwick, you can find samples of the New York street art, cafes and restaurants.

It also stands out for having a student community that transformed this area into an outdoor gallery and one of New York’s hipsters neighborhoods par excellence.

The subway stations in the area include Jefferson St, DeKalb Av, Halsey St and Central Av.

In addition, it is also possible to move to other neighborhoods through the bus lines of Bushwick.

Bushwick is one of the best areas to stay in Brooklyn to appreciate urban art and cultural diversity. 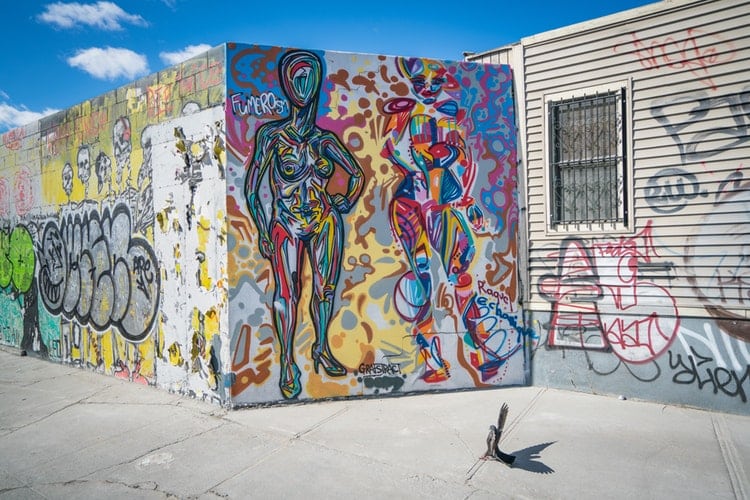 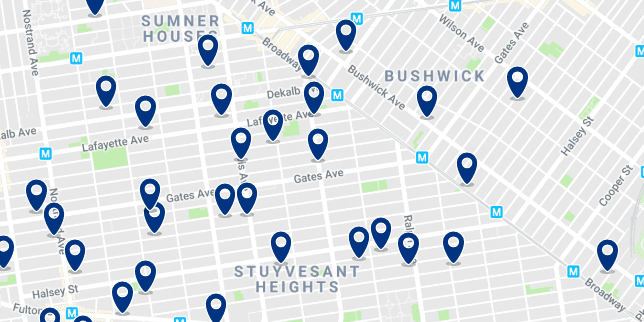 Brooklyn – Bushwick – Click here to see all hotels on a map

Bedford Stuyvesant (also called “Bed-Stuy” by locals) is located in downtown Brooklyn. This neighborhood is bordered on the north by Flushing Avenue, on the west by Classon Avenue, on the east by Broadway and Van Sinderen Avenue, and on the south by Park Place and Ralph Avenue.

As a cultural center of the African-American community, it is famous for its historic buildings, churches and an old library that make it one of the best areas tostay in Brooklyn to rest from the typical New York hustle and bustle.

Popular activities to do at Bedford Stuyvesant range from touring the Restoration Plaza, the Fulton shopping street, Nostrand Avenue and parks such as the Herbert Von King and the Prospect.

Depending on the area of ​​Bed Stuy in which you stay, the metro lines can be A, C or G.

Bed-Stuy is considered one of the best areas to stay in Brooklyn for its picturesque and peaceful atmosphere.

Greenpoint is located in the heart of Brooklyn and is one of its most famous neighborhoods, known for its industrial style architecture and for having a large Polish community.

The means of transport in this neighborhood include ferry or subway, taking the G line on Greenpoint Avenue or on Nassau Avenue, as this line does not enter Manhattan.

Among the attractions of this area is the Greenpoint Gallery, an art gallery located at 390 McGuinness Boulevard.

At the Take Karczma or the Five Leaves, located on Bedford Avenue, you can enjoy a delicious brunch or Australian-style burgers.

Its slow and modest pace, away from the hustle and bustle of Manhattan, make Greenpoint one of the best areas to stay in Brooklyn if you want tranquility during your time in New York. 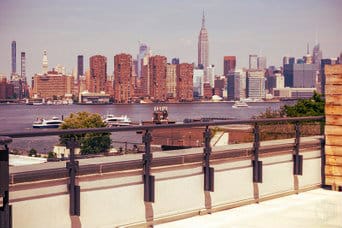 View of Manhattan from Greenpoint, one of the best areas to stay in Brooklyn

Brooklyn – Greenpoint – Click here to see all hotels on a map

What makes this the best area to stay in Brooklyn NYC