The Best Areas to Stay in Houston: Top Districts and Hotels

Where to Stay in Houston, Texas – What You Should Know

Houston is the fourth most populous city in the United States and is located southeast of the state of Texas, near the Gulf of Mexico.

This Texas metropolis enjoys tourist attractions such as the Space Center, home of US space missions, the Houston Galleria Mall, the Museum District and the lively nightlife in Montrose.

Houston enjoys a subtropical climate, so the recommended months to visit the city are May and September. During the summer months, temperatures of over 90ºF (32°C) are common, while in mild winter, the temperatures drop to 61ºF (16°C).

The transportation system of Houston consists of light rail (METRORail) and Metro buses, with a variety of stations throughout the city.

In case of arriving at the Bush Intercontinental Airport or the Houston Hobby, you can take the Super Shuttle, the METRO bus or a taxi to move to other Houston areas

Houston is a city of epic proportions. If your visit to Houston is solely to visit the NASA Space Center, you can choose to stay in its surroundings See accommodation near Houston Space Center.

Areas such as Downtown Houston and Galleria are recommended when deciding where to stay in Houston, as they have hotels that suit the purpose of travel, budget and interests (See accommodation in Galleria | See hotels in Downtown Houston.

The best hotels to stay in Houston

Hostels and cheap stays in Houston

Would you like independence? Book an apartment in Houston

Inns, B&Bs and guest houses in several areas around Houston

The Best Areas to Stay in Houston, TX

The Galleria Houston is the largest shopping center in Texas.

With around 375 stores, 30 restaurants, two hotels, and an ice skating rink. It is located at 5085 Westheimer Road.

Galleria Houston is located in a central and exclusive area of ​Uptown Houston, surrounded by shops, restaurants, and hotels for comfortable accommodation.

Staying in this area allows you to visit the shopping center and high fashion shops of recognized designers such as Louis Vuitton, Jimmy Choo or Ralph Lauren. It also has large department stores like Macy’s.

Galleria Houston stands out as the best area to stay in Houston, due to its exclusive location, its variety of shops, bustling nightlife and restaurants.

This area is connected to the rest of the city through the stations offered by the bus system in Westheimer and Hidalgo streets. 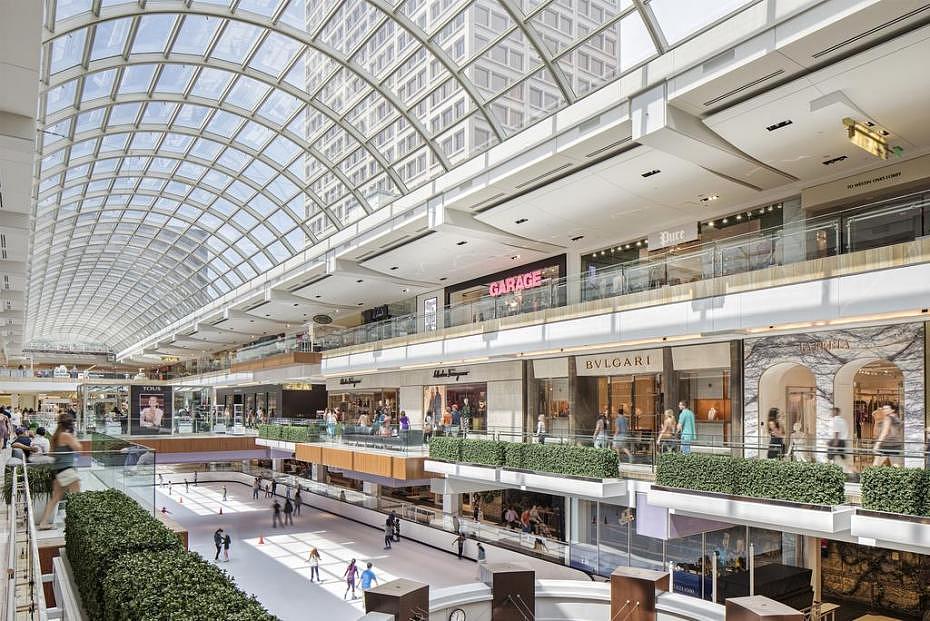 Best areas to stay in Houston, Texas – The Galleria & Uptown 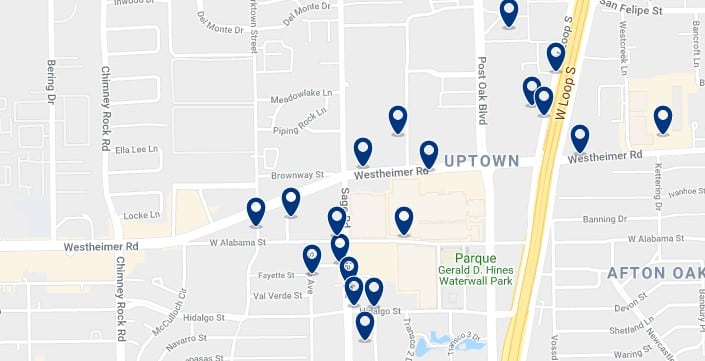 Houston – Galleria – Click here to see all hotels on a map

Downtown Houston stands out for hosting the majority of Houston skyscrapers, mostly offices.

Given its central location at the confluence of Interstate 10 and Interstate 45, it is another of the best areas to stay in Houston.

Among the attractions in Downtown Houston are the Alley Theater, and the imposing architectural works such as the One Shell Plaza and the JPMorgan Chase tower, one of the tallest buildings west of the Mississippi River.

This area has bus lines and 3 METRORail lines available.

Downtown Houston is home to the Houston Tunnel system, which connects buildings and offices to other downtown areas.

Along the tunnel there are a variety of restaurants, cafes, dry cleaners, beauty salons, craft shops and other places.

Downtown Houston has high-quality accommodation, from mid-range hotels to very luxurious ones that offer stunning views of the area’s skyline.

Downtown – Where to stay in Houston

Houston – Downtown – Click here to see all hotels on a map

Midtown is an urban area located in the south of Downtown Houston, next to The Museum Park, the Montrose neighborhood, East Downtown, Third Ward and the Museum District.

This area is famous for having artistic complexes such as Midtown Art & amp; Theater Center Houston (MATCH) located at the intersection of Main and Holman streets, where several visual and performing arts groups meet.

Other highlights are the Buffalo Soldiers Museum and small parks such as Baldwin Park and Bagby Park, where you can enjoy the day and spend some quality time with family.

North of Midtown has a lively nightlife, with a variety of bars and karaokes, informal fast food places, and the most sophisticated restaurants.

Houston – Midtown – Click here to see all hotels on a map

The Museum District is located near Texas Medical Center and Rice University south of Houston. Within this group, there are 19 museums which can be accessed through METRORail.

It is one of the best-known cultural districts in the United States. Here, you will find the Museum of Fine Arts, the Holocaust Museum, the Museum of Natural Sciences, the Children’s Museum and other more curious ones such as the Health Museum and the National Museum of Funeral History.

This area includes natural attractions such as Hermann Park, an amusement park located to the south of the district, Peggy Park and the Houston Zoo.

This is one of the best areas to stay in Houston because of its a more tranquil and historic environment. However, for its few restaurants and bars, it does not have a nightlife like other areas of Houston. 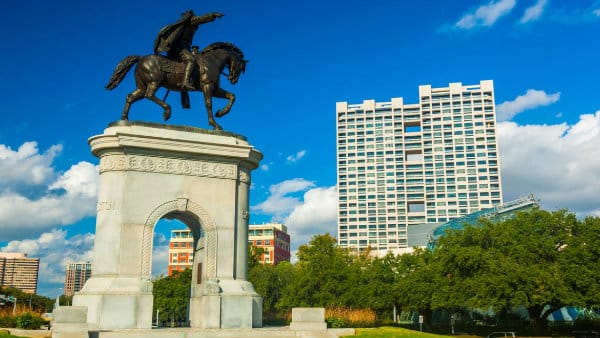 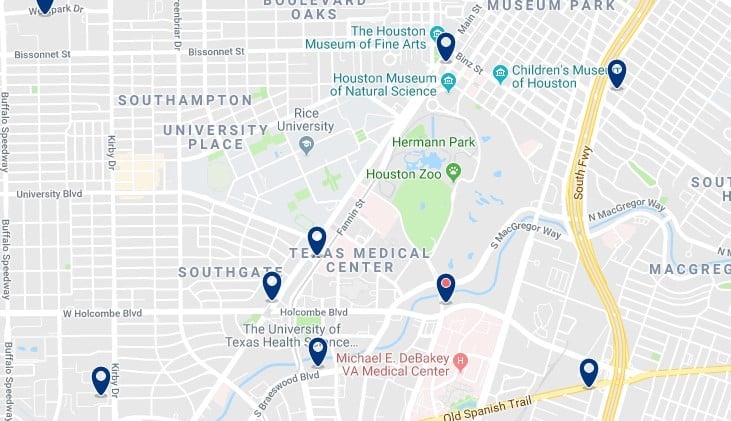 Northwest Houston is known as a residential area and leisure center for tourists.

Some popular activities in this area are attending the Terry Hershey Park, the Karts circuit, going to the cinema or visiting the small shopping centers and their stores.

It is recommended to stay in this area due to the tranquility it offers. It also has some small parks, and it serves as accommodation for those who want to escape from the bustle of the big city.

Northwest Houston has a wide range of accommodation and some of the cheapest hotels in Houston.