The Best Areas to Stay in New Orleans: Top Quarters and Hotels

Where to Stay in New Orleans – What You Need to Know

New Orleans is the largest city in the state of Louisiana. It is located in the delta of the Mississippi River, in the South of the United States.

New Orleans is famous for being the cradle of jazz, home to voodoo museums and one of the most multicultural urban centers in America.

New Orleans is one of the most visited destinations in the United States, especially during spring break and weekend getaways. This is in part due to its music festivals, live concerts, Mardi Gras celebrations and the legendary Bourbon Street nightlife.

In New Orleans, the first months of the year are usually cold. Spring is rainy, late May to September brings humid heat and October brings drier and more pleasant weather.

NOLA’s transportation system consists of bus and tram lines distributed throughout the city.

Taxis abound in the French Quarter, passenger ferries can be taken at Algiers Point or, if the journey is short, you can choose to tour the city center in one of the popular old carriages from Jackson Square.

Areas such as the French Quarter, Bourbon Street, Jackson Square and Marigny are noted for their attractions, history and entertainment options, all are part of the recommended districts to stay in New Orleans, the birthplace of jazz. (See accommodation in the French Quarter).

Below is a list of the best areas to stay in New Orleans, Louisiana.

The French Quarter occupies part of the area near the Mississippi River in downtown New Orleans, from Canal Street to Esplanade Avenue and Norman Rampart Street.

It is the oldest and best-preserved district of New Orleans, it houses monuments such as St. Louis Cathedral, the City Hall, and the French Market, among others.

NOLA’s French Quarter is par excellence the nightlife area in New Orleans. Its epicenter is Bourbon Street, where you can find the best pubs, jazz bars, and nightclubs.

Vieux Carré is very popular for being the home of the Mardi Grass celebration and the epicenter of the LGBT community in the city.

Staying within the limits of the French Quarter, among other advantages, allows you to walk to the attractions and interesting sights.

The tram system has stations on the major avenues, such as Rampart Street, Canal Street, Dumaine Street, Ursulines Avenue and right next to attractions such as the French Market, St. Louis Cathedral, Woldenberg Park and the Aquarium.

If you’re looking to stay in New Orleans during Mardi Gras, you should know that accommodation in the French Quarter sells out soon, and room rates in this area during NOLA’s big celebration will only get higher as the event approaches. If you are looking for accommodation in the French Quarter during Mardi Gras, it is advisable to book well in advance.

The French Quarter is definitely the best area to stay in New Orleans due to its central location, lively nightlife and variety of boutique hotels.

French Quarter – Where to stay in New Orleans

The Central Business District is today a dynamic, mixed-use neighborhood, with numerous skyscrapers, shops and boutiques, a large number of restaurants and bars and historic commercial and industrial restored buildings.

Union Passenger Terminal, New Orleans main train station, is located in the CBD. This station is one of the main railway junctions in the Country. Railway lines from places as distant as California, New York or Chicago all converge here.

It is the ideal area to enjoy business-type accommodation. And as it couldn’t be otherwise, the CBD is the best area to stay in New Orleans for business travelers. 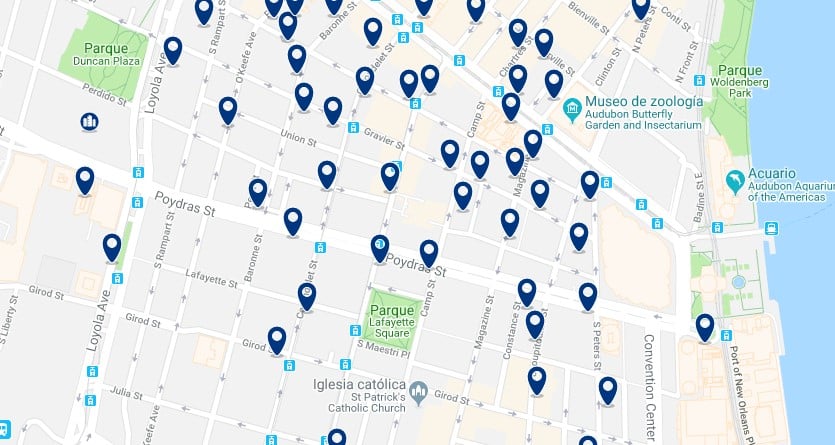 Fabourg Marigny is a small area of New Orleans, located north of its central core, just above the French Quarter.

Marigny is a very attractive neighborhood, especially during spring, the best time to visit its galleries, enjoy the gastronomy, visit its lovely museums and the popular Voodoo Spiritual Temple.

To access the tram in Marigny District, it is necessary to walk to St. Claude Avenue or Esplanade Avenue, where the main stations are located.

Unlike other areas in the city center, Marigny does not have a wide range of luxury hotels, but it is the ideal neighborhood to stay in New Orleans for small boutique hotel lovers.

Marigny also has the advantage of a super-central location and much more affordable rates than its neighboring French Quarter. 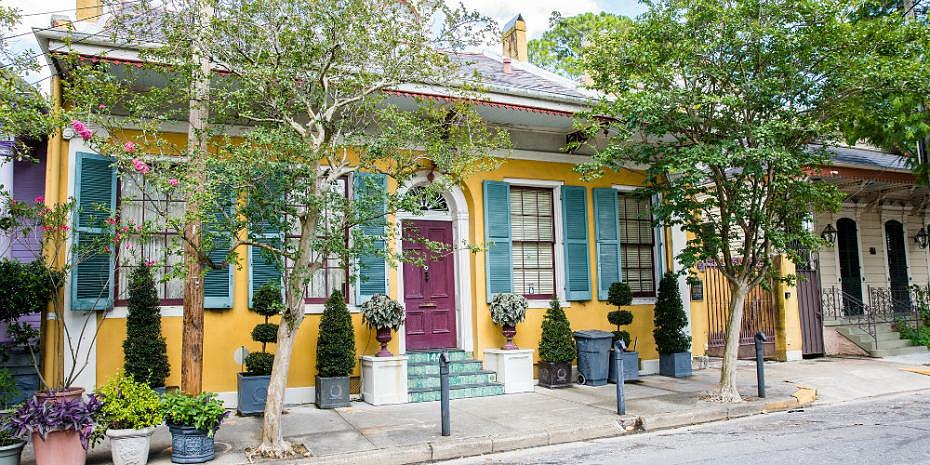 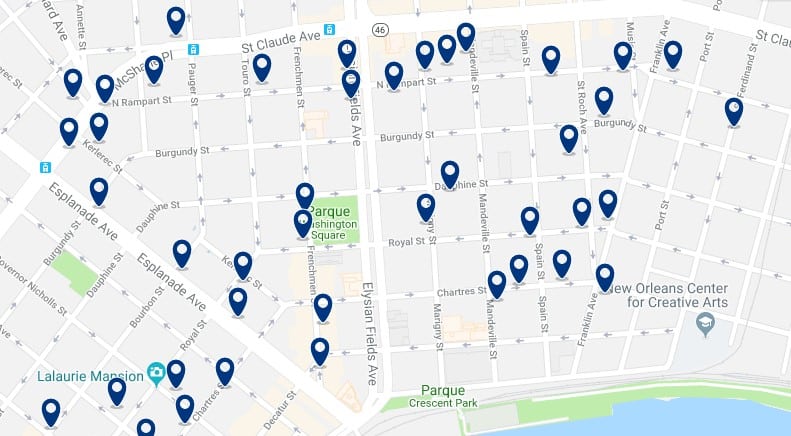 New Orleans – Marigny – Click to see all hotels on a map

Officially called Tremé – Lafitte, but popularly known by its French name, Faubourg Treme, this neighborhood is an old district of downtown New Orleans.

Bordered on the east by the French Quarter, on the north by the Seventh Ward and on the south by Tulane Gravier, it is one of the nicest historical African-American neighborhoods in New Orleans.

The area offers some small museums such as Tremé Petit Jazz Museum, The Faerie Playhouse, and Backstreet Cultural Museum.

There are also many African-American restaurants, jazz bars and historical parks, such as the New Orleans Jazz National, Historical Park and Louis Armstrong Park.

It is not an area well connected by the tram, however, it has several bus stops. 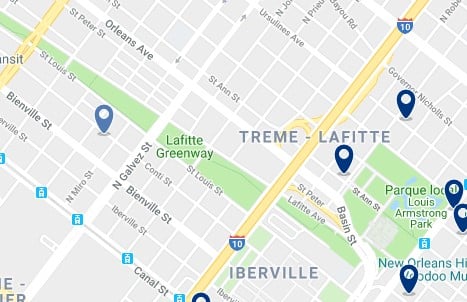 What makes this the best area to stay in NOLA