Many times, cemeteries and are an almost perfect reflection of the places in which they’re found. Like a city within a city that sometimes mimics the dynamics of the society above.

And precisely this fact is reflected at Cementerio de Montjuïc in Barcelona, the most reknown and prestigious final resting place in the SPanish city; a micro cosmos in which some of the richest families in Catalonia competed against each other to erect the most formidable mausoleum possible. Everything was allowed in the war for the faciest residence in the afterlife.

Two of the families who most perfectly embody this typical bourgeois competitiveness of the Barcelonian fin de siècle were the Amatllers and the Batllós, best known for their respective palaces in the Passeig de Gràcia Avenue and who competed in life to own the most luxurious residence in town. Their oppulent strife gave us the marvelous Batlló and Amatller Houses on the poshly infamous Illa de la Dicòrdia; the former being one of Spanish architect Antoni Gaudí’s masterpieces.

Both families took their grudge, quite literally, to the grave and had an ultimate challenge in Montjuïc. The Ametllers went for a neo-Romanesque church-like pavillion, while the Batllós opted for a neo-Egyptian mausoleum; both architectural neo-currents are closely related to the Art Nouveau movement of late nineteenth century known locally as Modernisme.

Actually, ff there is one trait that defines this awesome graveyard, apart of course of its dramatic location on a hillside overlooking the sea, it’s its architectural eclecticism.

Very much like Barcelona itself, in Montjuïc, Art Nouveau is king. Although many of the most prestigeous masters of Modernisme Català (including Gaudí) are famous for their buildings, most of them made some extra money on the side designing the graves of the rich and famous of their time. 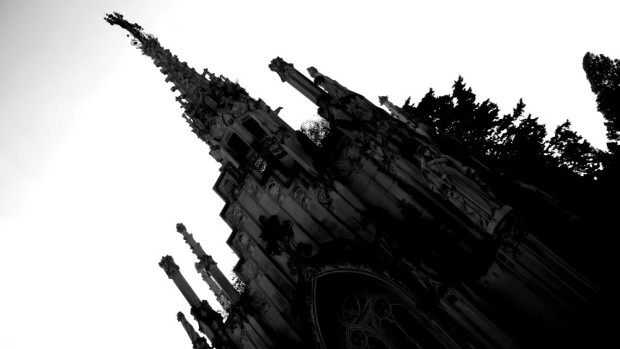 Although Montjuïc was used as an place of burial for the local Jewish population in the Middle Ages (in fact Montjuïc literally means “Judaic Mountain” in old Catalan), the cemetery didn’t open until March 17, 1883.

As was the case with other large graveyards such as La Almudena or Père Lachaise, the creation of Montjuïc, on the outskirts of the old city was a matter of health and space.

In the late nineteenth century, Barcelona had small cemeteries in Sant Andreu, Sant Gervasi, Sants and Horta, plus a larger one in Poble Nou, also known as Cementiri de l’Est. However, the expansion of the city during the Industrial Era, forced the authorities to come up with a plan to design a new large necropolis on the southern slope of the Montjuïc mountain.

As a novelty, the new cemetery had spaces designated for burials of people of different religions.

Currently the cemetery is still used, although its expansion is impossible. The oldest graves are located in the lower part of the cemetery and as the dates on the headstones become more recent as you go up.

Overall, Montjuïc Cemetery is one of the most evocative and beautiful places of Barcelona.