The Best Areas to Stay in Shanghai: Top Districts & Hotels

Where to Stay in Shanghai – What you Need to Know

Shanghai is an authentic Asian super metropolis. It is known for being the financial capital of the People’s Republic of China.

This city is located in Eastern China, very close to the mouth of the Yangtze River and 40 kilometers from the coast of the China Sea.

Shanghai is a world-class city with great attractions and infrastructure. Its appeal is based on a mixture of huge skyscrapers, traditional neighborhoods, and a port city atmosphere.

Shanghai is near the sea in a humid region. This means winters (December-March) are gray and rainy, and summers (June-September) are hot and humid.

The city’s metro system is very effective and connects each area of Shanghai. The Transrapid Railway (a magnetic levitation train) is the most innovative way to travel in Shanghai, its connections only reach, for the moment, the international airport of the city (Pudong).

Shanghai is a destination of contrasts, on the one hand, it offers ultra-modern urban areas and on the other, ancient neighborhoods.

The best hotels to stay in Shanghai

Hostels and cheap stays in Shanghai

Would you like independence? Book an apartment in Shanghai

Inns, B&Bs and guest houses in several areas around Shanghai

The Best Areas to Stay in Shanghai, China

Huangpu is Shanghai’s central district and true heart of the city.

The Bund (Shanghai’s river promenade) is home to the most important collection of colonial-era monuments in town. It also hosts a variety of galleries and museums.

Six lines of the Shanghai subway system cross this district.

People’s Square Station is the most important of the eleven metro stations in the Huangpu district. It is located next to the People’s Square and Nanjing Road.

Staying in the center of Shanghai has its advantages; you can get to know the area on foot and move to many attractions with ease. The city center also offers the best view of the famous skyscrapers of Pudong, across the river.

As expected, hotels here are among the most expensive in Shanghai, however, it is still a recommended area to stay in Shanghai given its central location and historical value. 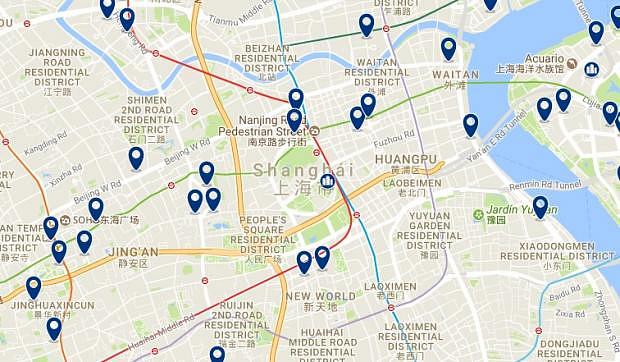 Shanghai – Huangpu – Click to see all hotels on a map

Xuhui is a mostly residential district located in the southwest of central Shanghai.

Xijiahui, one of the sub-districts that make it up, is known as a shopping mecca within Shanghai, with shopping centers such as Grand Gateway Shanghai and Pacific Sogo.

The French Concession is another of Xuhui’s famous neighborhoods, in the past, it had some of the most expensive mansions and residences in the city. Currently, many of these buildings are modern boutiques, cocktail bars, and nightclubs.

Xuhui is relatively central, however, do not expect to be able to walk to Huangpu.

The good news is that this district is served by seven metro lines and one suburban public transport, operated by China Railways.

Xuhui is a good alternative to stay in Shanghai considering its great connections, charming European-inspired architecture and wealth of accommodation.

Where to stay in Shanghai – French Concession

Shanghai – Xuhui – Click to see all hotels on a map

Pudong is the financial and commercial center of Shanghai. It is located east of the Huangpu River.

It is a popular area for business travelers, as it houses the Shanghai Stock Exchange, as well as some of the city’s famous skyscrapers such as the Pearl Tower, the Jin Mao Tower and the Shanghai World Financial Center.

The city’s international airport is also located within this district of Shanghai.

Pudong is crossed by ten metro lines and a tram services, making it a very well connected area to stay in Shanghai.

The best way to get to the airport is through Shanghai’s magnetic levitation train. Its terminus is Longyang Road, located on the outskirts of the city center.

Pudong is the best area to stay in Shanghai for business.

Accommodation in Pudong tends to be on the luxurious side, with several local and international high-end hotel chains.

Shanghai – Pudong – Click to see all hotels on a map

Huaihai Rd. is much more exclusive than the aforementioned Nanjing Road.

The shops, shopping centers, restaurants and boutiques of Western brands such as Louis Vuitton, Tiffany & Co., Cartier, are all located in this area.

There are also several entertainment options in this area.

Huaihai is very well-connected by metro.

Huaihai is a great area to stay in Shanghai if you want to go shopping.

Shanghai – Huahai Road – Click to see all hotels on a map

Jing’an and Zhabei were formerly independent districts, nowadays they are a single entity and cover a part of Shanghai’s city center.

The area is located east of Huangpu and is one of the business districts in the city.

This district hosts the Buddhist Jing’an Temple and, across from it, Jing’an Park.

Undoubtedly, the main attraction of Jing’an is its nightlife.

This area displays a collection of lively bars and nightclubs that remain open during the Shanghai nights.

As is characteristic of the city center, Jing’an is a well-connected area of Shanghai. It has seven metro lines, strategically located in the most dynamic points of the district.

Jing’an and Zhabei are some of the most budget-friendly neighborhoods in the city center, especially when compared to Huangpu and Nanjing Road.

Jing’an has a varied offer of accommodation and the best nightlife in Shanghai.

Changning extends from near the French Concession west of Downtown and just north of Xuhui District.

The district is not known for its attractions or entertainment. It is an urban and modern area of Shanghai, but a bit far from the downtown Bund or the vertiginous Pudong.

Shanghai’s Zoo is probably the best-known attraction in Changning. It has more than 6000 animals, including giant pandas and golden monkeys.

It is a good place to stay in Shanghai if you wish or have to be near Hongqiao airport.

Staying at the east end of the district is the most convenient way to access the secondary airport of Hongqiao.

You can also choose to stay in another corner of the area and use the metro lines 2, 3 or 11 to the Hongqiao Airport Terminal 1 station.

There are affordable prices and good hotel options to stay in Shanghai near the airport.

Where to stay in Shanghai – Changning 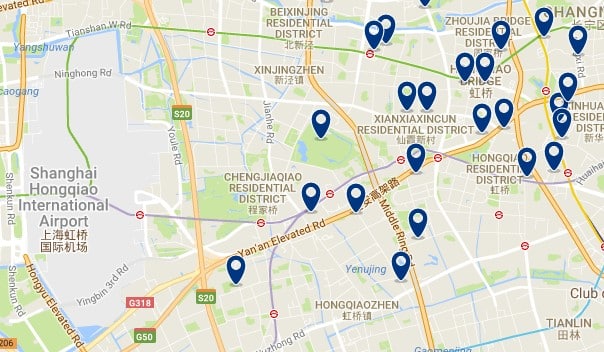