Where to stay in Sydney – What you need to know

The city of Sydney is the capital of the New South Wales state and the largest city in Australia. It is an industrial, financial and service hub that serves as one of the main economic drivers of the country and the Asia-Pacific region.

The best areas to stay in Sydney

It is an immense and extremely multicultural city, with a tumultuous and rich history that has undoubtedly shaped the city we see today. Sydney is a city with lots of things to see and do.

Sydney is one of the most important tourist destinations in Australia and its international airport is the single busiest in Oceania, making the New South Wales capital one of the most convenient gateways for exploring the continent. See all Sydney hotels.

Sydney is connected by metro, trains, buses and trams, so getting around the city is fairly easy. The metro system reaches many corners of the city, although it is not as extensive as one would hope so for a city its size.

Accommodation costs in Sydney tend to be really high by every standard and quality varies abruptly. On this list, we have hand-picked a selection of the top hotels in each area of the city. For your peace of mind, they all have a customer rating of 7/10 or higher.

The best hotels in the Australian city. Budget to luxury.

Would you like freedom? Book an apartment in Sydney.

Pensions, bed and breakfast and guesthouses in Sydney.

The best areas to stay in Sydney, Australia

The CBD is Sydney’s central district and, as the name implies, it is in its geographical centre.

Located on a rocky peninsula, the CBD is the best area to stay in Sydney if you want to be close to everything, as most of the city’s tourist attractions are in the confines or around the fringes of the CBD.

This was the first area where the English settled in the territory of present-day Australia, making it one of the oldest continually-inhabited areas in Oceania (from a Western perspective).

The CBD is a business and shopping area that blends modern skyscrapers with historic buildings of different styles. The Sydney Harbor Bridge, the Opera House, The Sydney City Hall and the Sydney Tower are all located in this district.

The CBD is also surrounded by some of the most beautiful and iconic parks in the city, such as Hyde Park, the Royal Botanical Gardens or Observatory Hill Park.

Not everything is business in this district. The Rocks area near the Harbour Bridge has a pleasant European atmosphere and excellent dining and nightlife options, and the west side, bordering Darling Harbor is a tourist and entertainment area. The CBD also hosts Sydney’s famous Chinatown.

This area is one of the best areas to stay in Sydney due also to its good train and ferry connections.

The hotels in this area tend to be the most expensive in the city, but it is possible to find some deals if you know where to look. 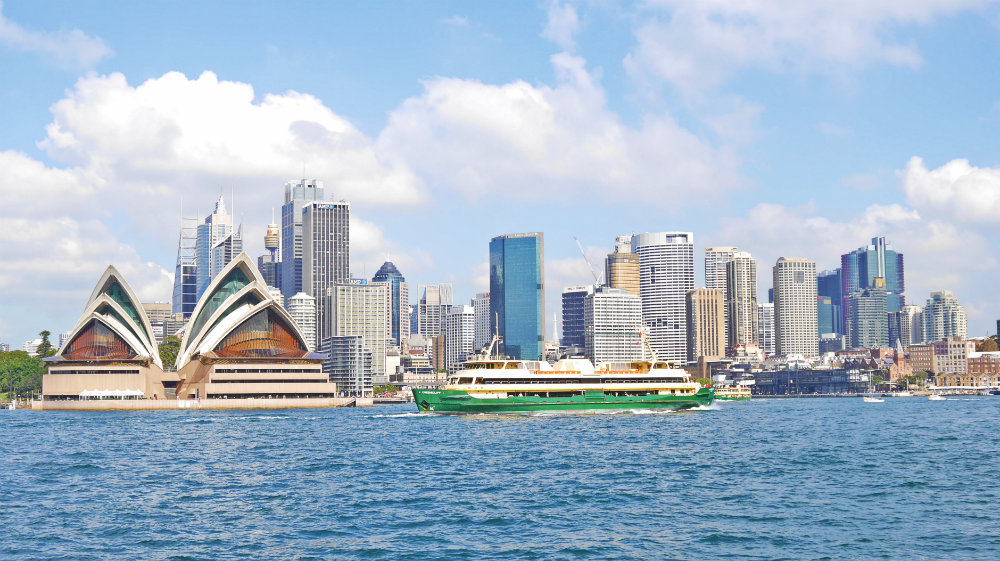 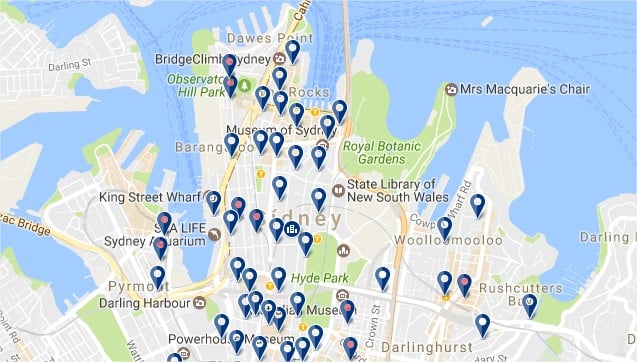 Sydney CBD – Click to see all hotels on a map

Different areas of the CBD:

Travelodge Hotel Sydney is a contemporary hotel located next to Sydney’s iconic Hyde Park and very close to Oxford Street. It is a five-minute walk from the metro and it has a gym.

Lovely Rendezvous Hotel Sydney Central is a mid-range hotel located in the centre of Sydney, next to the Central train station. It stands out for its contemporary decoration and excellent connections.

Top-notch InterContinental Sydney is an exquisite five-star hotel located in the commercial heart of Sydney, next to the Botanical Gardens and a stone’s throw away from the Sydney Opera House. It has a swimming pool, spa and gym.

from AU$ 340
BOOK NOW
SEE ALL HOTELS IN THIS AREA

While it is a very central and middle-upper-class area, Surry Hills shows a more casual face and a less businessy attitude than the downtown area.

From an architectural point of view, it has a lower profile and a more European character, with tree-lined streets and a relaxed atmosphere.

It is considered one of Sydney’s creative hubs and is filled with restaurants, bars, galleries and bohemian-but-chic shops.

The hotels in this area tend to be somewhat cheaper than those in the CBD and the relaxed and neighborhood atmosphere is its biggest draw.

Although no Metro line crosses Surry Hills, the neighborhood occupies the west side of Sydney Central Station, hub for several Metro lines, commuter trains and medium and long distance services. 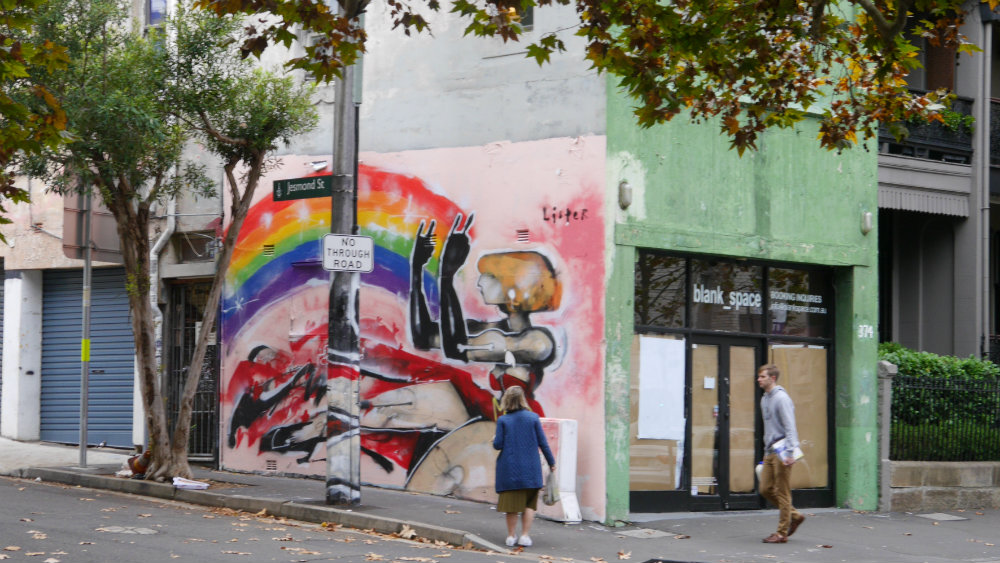 Where to stay in Sydney – Surry Hills 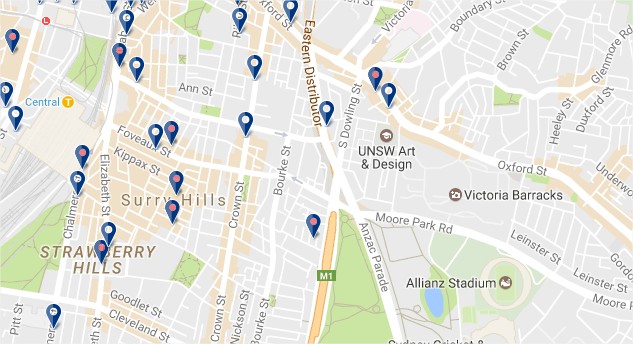 Surry Hills – Click to see all hotels on a map

Bounce Sydney is a boutique style hostel offering shared and private accommodation in the center of Sydney, two minutes’ walk from Central Station.

Modern Rydges Sydney Central is located three minutes walk from Sydney Central Station. It is a modern hotel with contemporary decor. It has a gym and a swimming pool.

from AU$ 188
BOOK NOW
SEE ALL HOTELS IN THIS AREA

Darlinghurst is located southeast of the Sydney Central Business District.

The streets that cross Oxford Street to the south are usually fairly quiet and residential with a European vibe.

Darlinghurst is home to some attractions such as the impressive Australian Museum, the National Art School or The Sydney Jewish Museum.

It is a fairly central area, connected by the Metro at Kings Cross Station to the east and Museum station to the west. Lots of buses connect Oxford Street with the city centre and beyond. 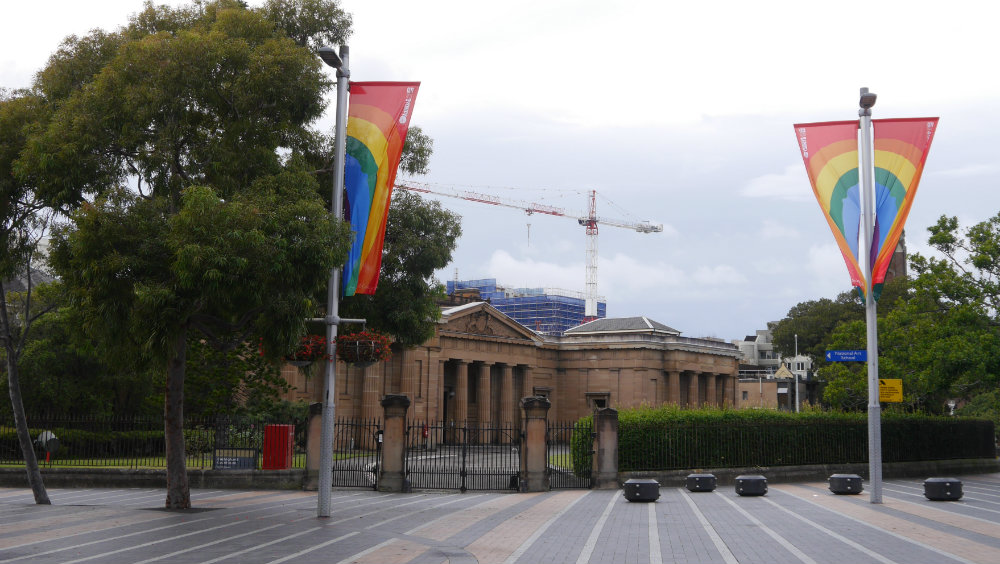 Historic Kirketon Hotel Sydney is an iconic hotel located on the Darlinghurst Road. It has a boutique style and modern rooms.

Impressive Medusa Hotel Sydney is a fantastic boutique style hotel with exquisite decor located on Darlinghurst Road. It has an excellent rating on booking engines.

from AU$ 210
BOOK NOW
SEE ALL HOTELS IN THIS AREA

Bondi is located about seven kilometres east of central Sydney.

The most famous attraction in the area is, of course, the iconic Bondi Beach, an institution for the surfer community around the world.

It is an area with a special character; it feels more like a beach resort town than a neighborhood in one of the most important cities in the world.

Bondi is the best area to stay in Sydney for surf lovers or those who want to mix a visit to the city with relaxing afternoons on the sand. 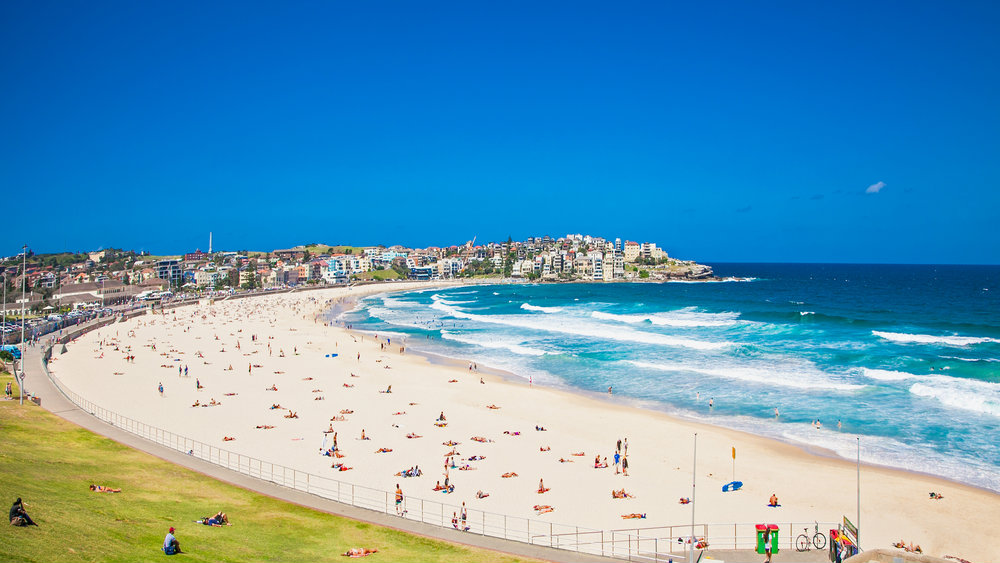 Iconic Hotel Bondi is a historic hotel conveniently located next to Bondi Beach. Some rooms have a balcony and a sea view.

from AU$ 199
BOOK NOW
SEE ALL HOTELS IN THIS AREA

As its name suggests, North Sydney sits on Sydney’s North Shore, on the other side of the Sydney Harbour Bridge.

It is a relaxed and residential area, much less hectic than the CBD and offering some of the most spectacular views of Sydney.

This area is connected through the Metro system, the light rail and the ferry.

The area near the bridge offers the best gastronomic and leisure options, with plenty of seafood restaurants and alternative cafes. 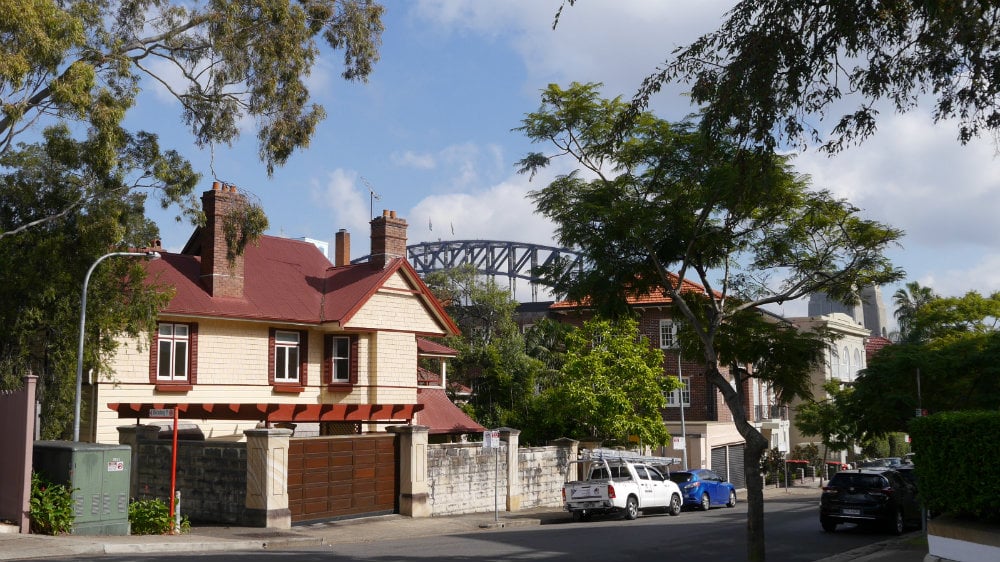 The North Sydney Hotel is a boutique-style hotel with eclectic decor next to St Leonards Park. It has a common living room and kitchen.

from AU$ 149
BOOK NOW
SEE ALL HOTELS IN THIS AREA

Best areas to stay in Sydney