Where to stay in Hiroshima & Miyajima – Best areas and hotels

Where to stay in Hiroshima & Miyajima – What you need to know

Hiroshima is a city in southern Japan, located on the delta of the small river Oto and on the Seto Inland Sea coast. 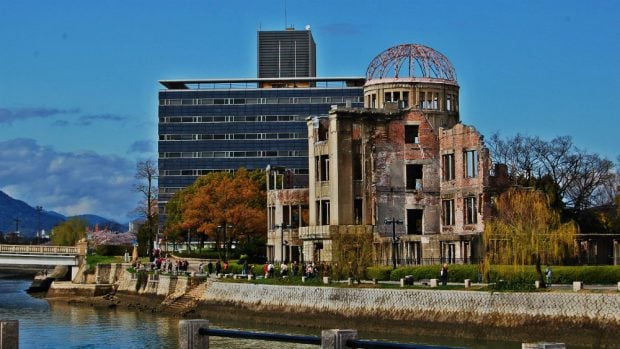 Where to stay in Hiroshima & Miyajima – Best areas and hotels

It is difficult to think of Hiroshima without associating it with the events of August 6, 1945, when Hiroshima became the target of the world’s first atomic bomb attack.

This bloody chapter of history would leave an indelible mark on the city. The consequences of this event can be seen even today.

However, today Hiroshima is a place of peace, a medium-sized city with a relaxed and cosmopolitan atmosphere.

The Hiroshima Peace Park attracts thousands of visitors interested in knowing the history of this city that overcame the worst of adversities and was reborn, almost literally, from its own ashes.

The city of Hiroshima has enough attractions to spend a couple of days and is also the gateway to other places in Japan, such as the island of Miyajima (Itsukushima).

Hiroshima has an efficient urban transport system made up of trains, trams, and buses that connect it from north to south and from east to west. The Hiroshima train station has local and long-distance rail services, as well as the famous Japanese Shinkansen high-speed trains. (See hotels around Hiroshima Station)

This is a guide with the best areas to stay in Hiroshima.

The best hotels in the Japanese city.

Hostels and cheap stays in Hiroshima.

Pensions, bed and breakfasts and guesthouses in Hiroshima.

Due to its location in the heart of the city, Central Hiroshima is the best area to stay in Hiroshima.

The central districts of Hiroshima are relatively compact in comparison with those of other large Japanese cities.

Central Hiroshima is the place where you can see the scars the atomic bomb left on the city.

This area stands out for its large parks and green areas, its broad tree-lined avenues, and its vibrant day and nightlife.

This area can be walked without problems, although it is also possible to use the city’s extensive tram system.

Central Hiroshima has a variety of bars and restaurants, as well as shopping options.

Attractions in this area include the Peace Memorial Museum, the Peace Park, the Atomic Bomb Dome, the Hiroshima Castle and Hiroshima’s Central Park.

Central Hiroshima is the most recommended area to sleep in Hiroshima. 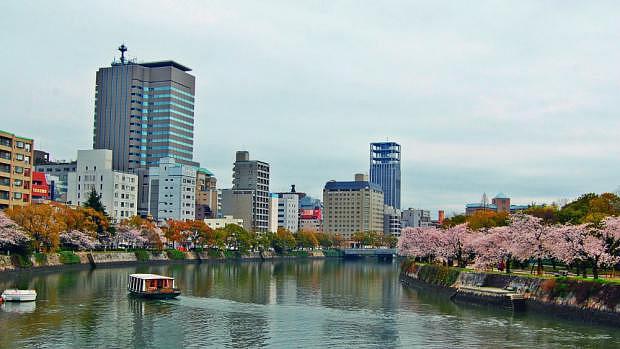 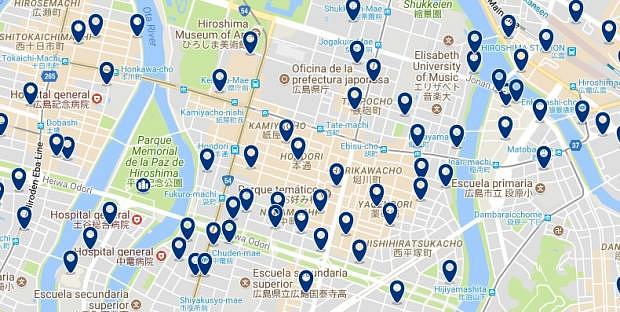 Hiroshima – Central – Click to see all hotels on a map

Itsukushima is an island located in Hiroshima Bay, on the Seto Inland Sea.

It is popularly known as Miyajima.

Miyajima is famous for its Itsukushima Shrine, which is a World Heritage Site by UNESCO since 1996.

The ferry service operates frequently with the JR West (JR Miyajima ferry) and with the tourist boat Miyajima Matsudai, connecting the island with the surroundings of Hiroshima. The journey takes about ten minutes.

The island is inhabited by deer and monkeys that are free at their ease. The deer are in fact considered sacred animals by the Shinto since they were considered messengers of the gods.

The island is a popular tourist destination thanks to the spectacular Itsukushima Sanctuary, the Miyajima cable car, its gastronomic specialties (you should not miss the local oysters) and the wildlife that lives around the place.

While it is possible to visit the island during the day and return to Hiroshima, at night, when all the tourists have left, Miyajima has a special and almost mystical atmosphere. 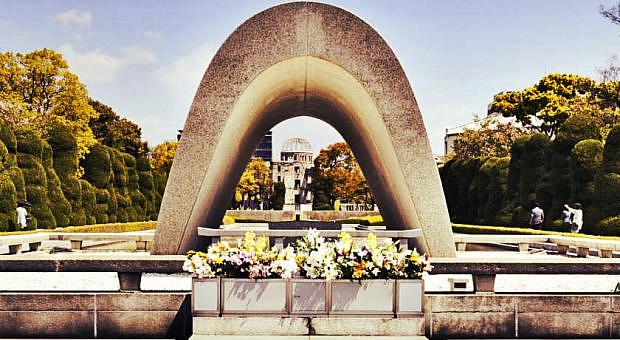 Hiroshima Peace Memorial Park is a memorial park dedicated to the legacy of Hiroshima as the first city in the world to suffer a nuclear attack and the memories of the direct and indirect victims of the bombing.

The Hiroshima Peace Memorial Park is visited by thousands of people each year.

The Hiroshima Peace Memorial Park is located in what was once the busiest commercial and residential district of the city. The park was built on an open field created by the explosion.

The area around the Memorial Park concentrates most of the monuments and memorials related to the events of 1945, such as the Dome of the Atomic Bomb, the Peace Museum or the Children’s Peace Monument, and also houses the Center International Convention of Hiroshima.

The surroundings of the Peace Memorial Park also concentrate a lot of light rail stations, which makes it very well-connected area to the rest of the city.

Hiroshima Station is located northeast of the city center.

Hiroshima station is on the JR West railway line and is an active transport hub serving western Japan.

The station itself is about 20 minutes walk from the city center or about 8 minutes by taxi.

The surroundings of the Hiroshima train station concentrate a large number of shops, office buildings, and hotels of all kinds.

A little further north of the city, a 10-minute walk from Hiroshima Station, you can find the temples of Onagatenmangu, Shojoki, and Kokuzenji and the Toshogu and Tsuruhane shrines.

Hiroshima Station is a recommended area to stay in Hiroshima, especially due to its good train connections.

Where to stay in Hiroshima – Around Hiroshima Station 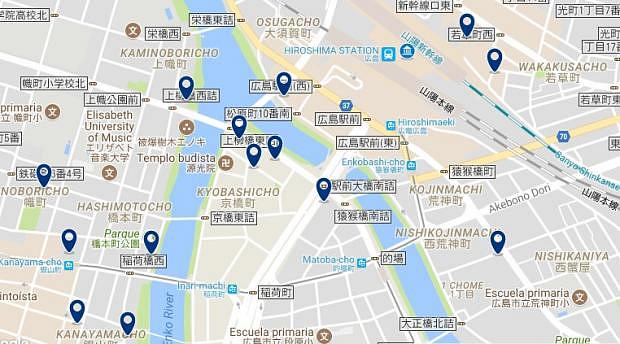 Hiroshima Station – Click to see all hotels on a map

Yokogawa is located in western Hiroshima.

This area has a very different feel from the city center. It is one of the few areas in the city that has retained its township status.

In fact, before the bombing, Yokogawa used to be the central area of Hiroshima. Yokogawa station is surrounded by new stores, but a walk through its back streets reveals a wonderful mix of alternative stores and less traditional places.

Most people arrive at the Yokogawa station by train (JR Sanyo or Kabe Line) or the Hiroden (tram).

Yokogawa has a relaxed atmosphere and on any given night of the week, you can find a place to hang out, eat or drink.

Yokogawa is an excellent place to stay in Hiroshima and a recommended area thanks to its transport connections and its casual atmosphere.

Hiroshima – Yokogawa – Click to see all hotels on a map

Best areas to stay in Hiroshima