Where to Stay in Cagliari – Best Areas and Hotels

Where to Stay in Cagliari – What You Need to Know

Cagliari is the capital of the autonomous region of Sardinia. 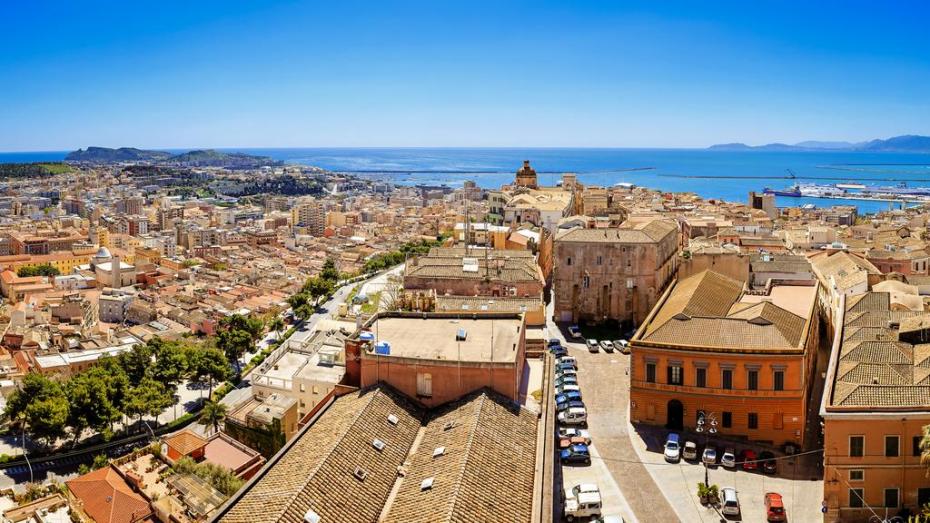 Where to Stay in Cagliari – Best Areas and Hotels

It is an important university and administrative city, as well as a port centre in Italy.

Cagliari is located in the Gulf of Angels, on the southern coast of Sardinia. Similarly to Rome, Lisbon, Prague and Istanbul, it was built on seven limestone hills.

When we talk about the best areas to stay in Cagliari, the medieval heart of the city, Castello, offers the widest variety of accommodation, as well as its main attractions. See accommodation in Castello.

The best hotels to stay in Cagliari, Italy.

Hostels and cheap stays in Cagliari.

Looking for independence? Book an apartment in Cagliari.

Pensions, B&B and guesthouses in Cagliari.

Where to Stay in Cagliari: A Summary

If you don’t have the time or the patience to read the full article, here is a summary with our recommended areas to stay in Cagliari. Keep reading to discover more information about each of the neighbourhoods.

Castello, known in Sardinian as Casteddu de Susu, is the main of the four historical districts of the city of Cagliari.

It is located in a prominent position, on a limestone hill about a hundred metres above sea level.

The history of this area of ​​Cagliari dates back to its foundation as a military fortress by the Pisans in the thirteenth century.

Over the centuries, the castle passed through Pisan, Spanish and Piedmontese hands.

The district is still accessed through the old medieval doors, open in the walls that still surround most of the perimeter of the Castle, isolating it from the rest of the city.

Currently, Castello houses important institutions such as the Prefecture, the Chamber of the Council of the Metropolitan City of Cagliari, the cathedral, and the rectorship of the University of Cagliari.

The most famous monuments of this fortified neighbourhood are the Pisan towers and the Saint Remy Bastion.

However, Castello’s main charm is in its narrow streets, stairs, and small squares with open terraces and views of the sea. 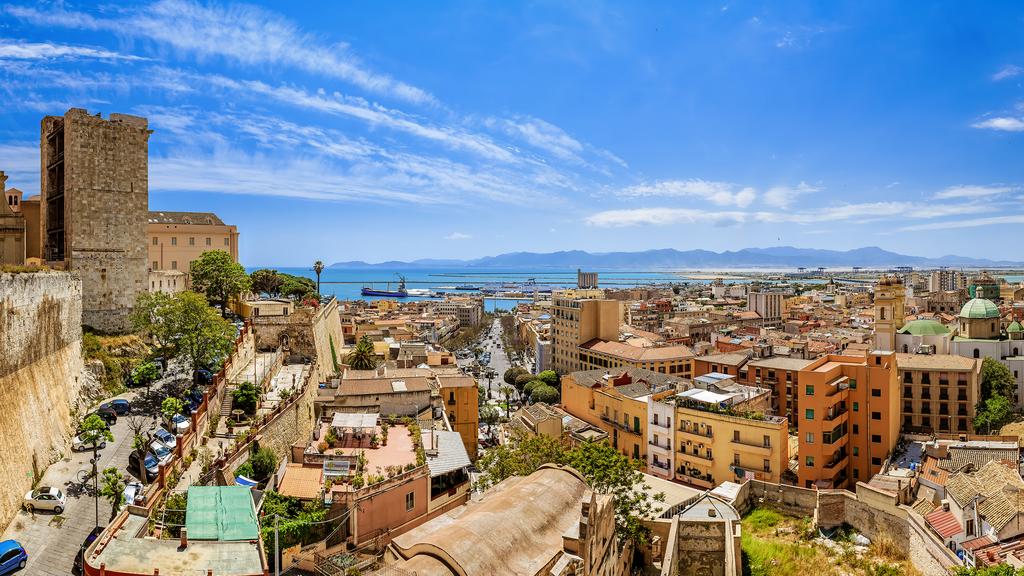 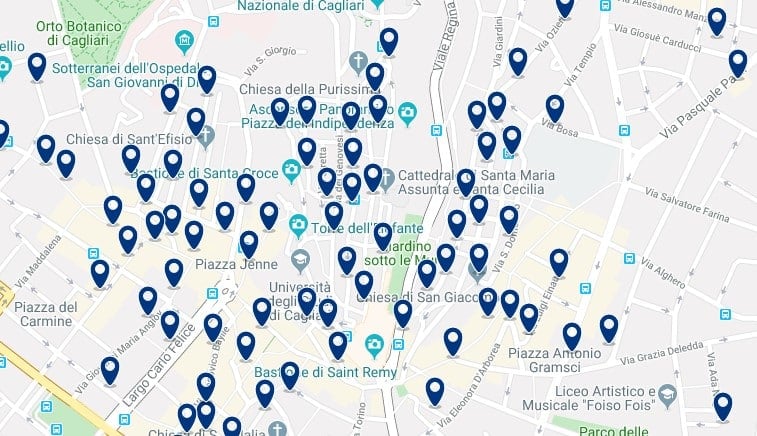 Cagliari – Castello – Click to see all hotels on a map

2. Near the train station and the ferry port of Cagliari

Cagliari station is the main train station in Sardinia. It is located in the central Piazza Matteotti, in the Stampace district, at the foot of the Castello and the medieval centre of the city.

Cagliari station has regional and express services trains to various destinations on the island, as well as commuter trains.

In the vicinity of the station, there are stops for urban bus services, as well as the Cagliari trolleybus network.

A few hundred metres from the station, you’ll find the commercial port of Cagliari, which connects the capital of Sardinia with Sicily and the Italian peninsula.

The neighbourhoods of Stampace and Marina are areas full of shops, nightlife and local food restaurants where you can taste delicious gastronomic delights.

This area is the best place to stay in Cagliari for travellers wishing to explore the beauty of the island of Sardinia by train or those who require access to the Cagliari ferry terminal.

Poetto Beach is a vast and impressive eight-kilometre urban beach that stretches between Cagliari and Quartu Sant’Elena.

The entire stretch of Poetto beach is wide, with clear water, and sandy bottom, which makes it ideal for families.

The shore has a promenade for walking, jogging, biking or rollerblading.

The beach has kiosks, bathrooms, showers and spaces reserved for dogs.

Leisure options in this area include diving centres, sailing schools, kayak rentals, surfboards and kitesurfing, canoeing, fast food restaurants, along with shops and even an amusement park.

Getting from Spiaggia del Poetto to the city is easy, as bus services between Piazza Matteotti and the beach are frequent and efficient.

Where to stay in Cagliari, Sardinia – Near Poetto Beach 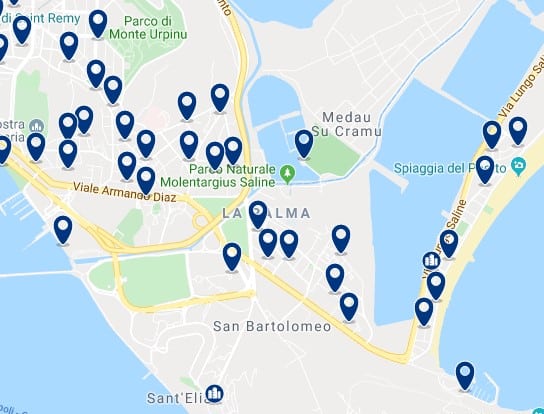 Located about 8 km east of the Sardinian capital is Quartu Sant’Elena, a coastal town that is part of the metropolitan region of Cagliari.

At the end of the 20th century, thanks to the construction of new districts, Quartu underwent considerable expansion and its inhabitants doubled. Today, with more than 70 thousand inhabitants, Quartu Sant’Elena is the third largest city on the island, after Cagliari and Sassari.

This area is known for its Malvasía wine, its jewels made with gold filigree, as well as homemade breads and cakes.

Quartu Sant’Elena is a modern and functional town, with deeply rooted craft traditions, as well as a beautiful coastline. 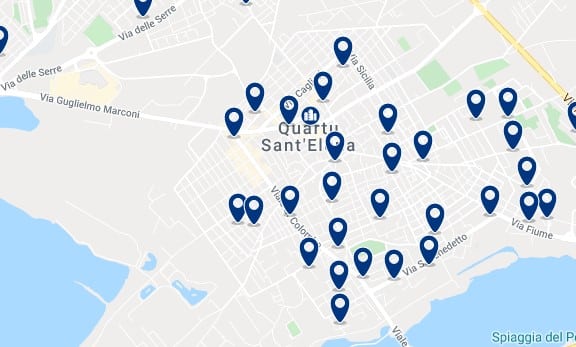 Where to stay in Cagliari: Useful information

The city developed in different periods: It is clearly possible to distinguish the historical centre of medieval origin and the new neighbourhoods that emerged between the 19th and 20th centuries.

The long history and the diverse towns that inhabited the island have contributed to endow Cagliari with an important cultural and architectural heritage. Among its attractions are the Tuvixeddu necropolis, of Punic age and the Roman amphitheatre of the second century.

The medieval heart of the city is the fortified district of Castello, which, until the Second World War, was the residence of the nobles.

Also noteworthy are the historic districts of Stampace, Marina and Villanova.

The climate of the city is typically Mediterranean, with mild winters and hot and dry summers.

As for transport, Cagliari hosts the Mario Mameli International Airport, which is located a few kilometres from the City Centre. This important air terminal has connections with the main cities of Italy and Europe. See accommodation near Cagliari’s Airport.

Cagliari has an important passenger and cruise port with services to Civitavecchia, Naples and Palermo, Genoa and Livorno. See hotels near Cagliari’s Port.

The main railway station of Cagliari is the Ferrovie dello Stato station, with trains connecting Cagliari with other points on the island of Sardinia such as Iglesias, Carbonia, Olbia, Golfo Aranci, Sassari or Porto Torres. See accommodation near Cagliari’s Train Station.

As for transport within the city, the tram network connects the old train station of Piazza Repubblica with the Citadel of the University and the Polyclinic. Cagliari also has urban buses and taxi service.

Best area to stay in Cagliari