Where to Stay in Nashville: Best Areas and Hotels

Where to Stay in Nashville, TN – What You Need to Know

Nashville is the capital city of Tennessee, it’s located on the banks of the Cumberland River, in the north of the state.

Nashville is the second-most populous city in Tennessee and the World Capital of Country Music.

Nashville, nicknamed the Athens of the North, is a university town and home to some of the most representative monuments of the American neoclassical architectural movement.

The Hermitage and the State Capitol are some of Nashville’s main attractions. Broadway and 2nd Avenue concentrate many restaurants, bars, galleries, night entertainment, and live music venues.

In terms of climate, Nashville generally enjoys moderate winters and hot summers, snowfalls are occasional between January and March.

The Tennessee Capital is home to multiple festivals and country music concerts. The city is also home to the famous Country Music Hall of Fame.

The best hotels to stay in Nashville

Hostels and cheap stays in Nashville

Would you like independence? Book an apartment in Nashville

Inns, B&Bs and guest houses in several areas around Nashville

The Best Areas to Stay in Nashville, Tennessee

Music Row is a small and historic Nashville district, located southwest of the Downtown area.

This area is famous for its many shops, shopping centers, museums, and restaurants, many of which are dedicated to country music and the rich musical culture of the Tennessee capital.

Among its most emblematic sites are Owen Bradley Park, Owen Bradley’s Quonset Hut, Scarritt Bennett Center and the famous Historic RCA Studio B.

As the center of this district lacks bus stops, in order to use public transportation on Music Row, it is necessary to go to the southern end of the area, to Music Square or 21st Avenue.

Music Row has a variety of accommodation options. Especially business-style, and some luxury hotels.

Music Row is one of the most attractive and central areas to stay in Nashville.

Recommended area to stay in – Downtown 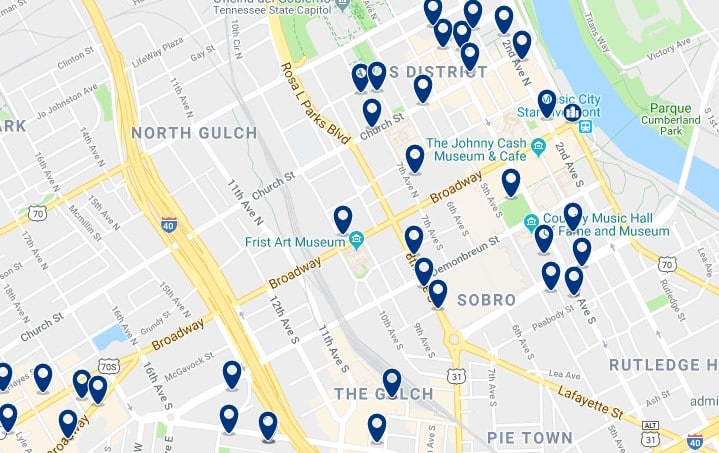 Nashville – Downtown – Click to see all hotels on a map

Downtown Nashville is located west of the Cumberland River, It encompasses the districts of Rolling Mill Hill, Rutledge Hill, Pie Town, The Gulch, North Gulch and part of Hope Gardens.

Downtown Nashville concentrates most of the historical and cultural attractions of the city.

The Tennessee State Capitol is one of the most important monuments in town. It is located between 5th and 6th streets of the north of Downtown.

The southern end of Downtown, concentrates many Nashville museums, most of them related country music, such as the Johnny Cash Museum and the Country Music Hall of Fame.

The downtown area of Nashville has the best tourist attractions in the city, making it the best area to stay in Nashville for sightseeing.

Moving around the city and reaching more distant sights, such as the Parthenon, is convenient from Downtown.

Recommended area to stay in – Downtown

Nashville – Downtown – Click to see all hotels on a map

Nashville’s West End is located in the Midtown district, south of Watkins Park and west of Music Row.

This area is very popular among visitors. Centennial Park is its most visited attraction, thanks to its cultural festivals, such as the Tennessee Craft Fair and the Celebrate Nashville Cultural Festival.

At its western end of the park is the main attraction of the district, the popular Nashville Parthenon. This replica of the Greek temple houses a statue of Athena Parthenos and a couple of art galleries.

Avenues 31 Street and Charlotte have numerous bus stops near Centennial Park and the Parthenon, from here you can move to any corner of Midtown and other districts in Nashville.

Nashville’s West End is the best area to stay in the city to visit the Parthenon and the attractions of Centennial Park. 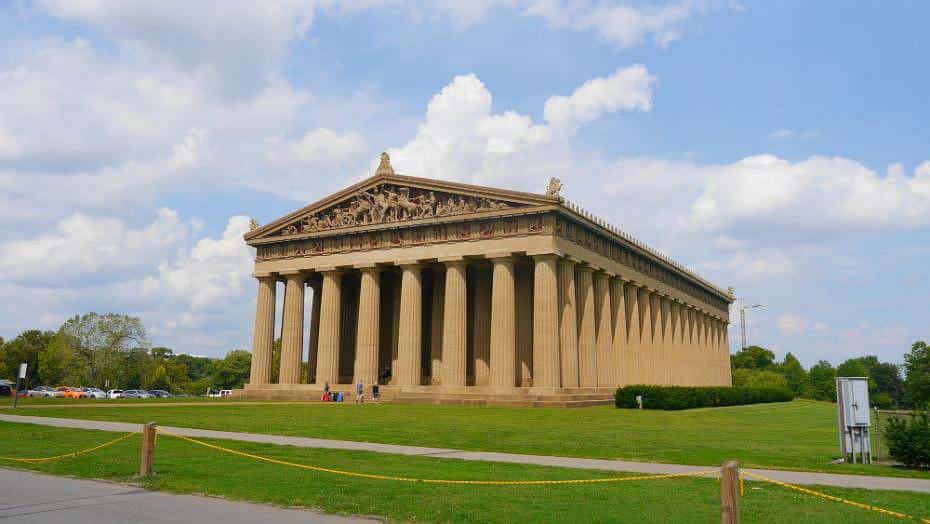 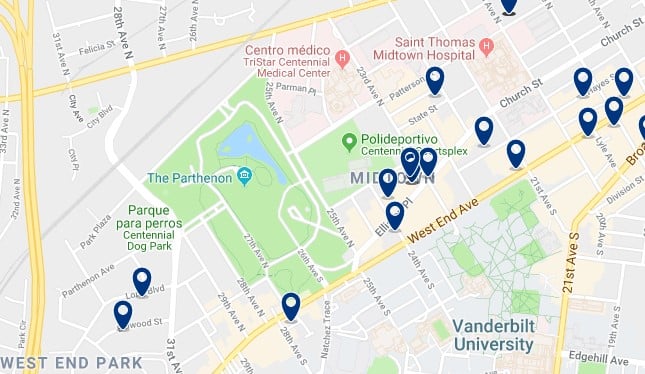 Nashville – West End – Click to see all hotels on a map

South Nashville is one of the largest districts in the city, located south of downtown and east of Music Row.

The city’s fairground complex, called The Fairgrounds Nashville, gives life to the southern area of the city. It is the official seat of the traditional Tennessee State Fair and multiple sporting events.

When it comes to public transport, buses connect Bransford Avenue.

During the State Fair, the streets around this area tend to get congested, so it is recommended to stay near the fair complex in order to move faster.

It is a relatively cheap area to stay in Nashville, quite central and affordable, thanks to its two and three star hotels. 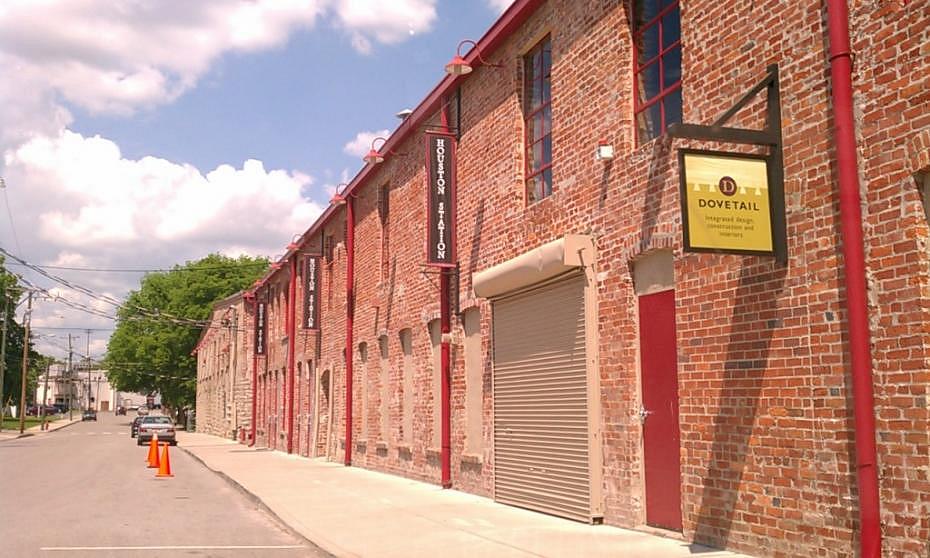 East Nashville is (as the name might suggest) to the east of Downtown Nashville, across the Cumberland River.

It is a mainly residential area, known for its many parks, quaint neighborhoods and coffee shops.

Some of this areas’ sights also include the massive Nissan Stadium, located at the southern end of the district, next to Downtown. This area attracts NFL and college football fans.

In general terms, East Nashville is a quiet, residential area with a family atmosphere, its proximity to downtown makes it a good neighborhood to to stay in Nashville.

Where to stay in Nashville – East Nashville 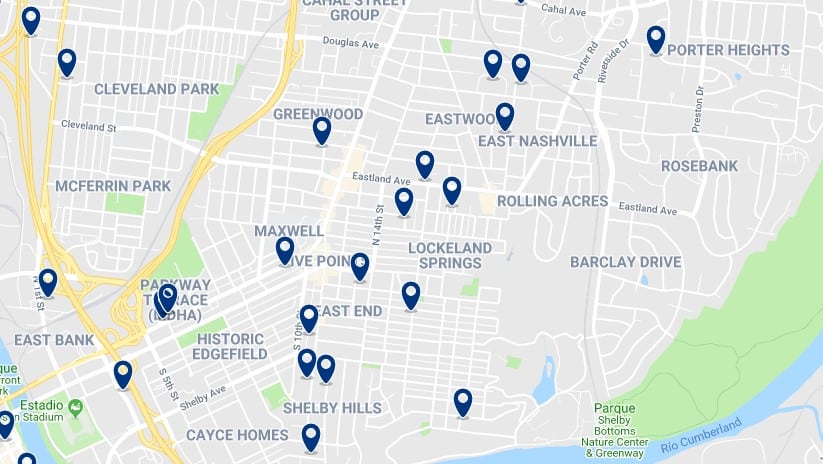 What makes this the best area to stay in Nashville

Opryland is located in east of the Cumberland River. It is an area far from the city center.

This area is home to Nashville’s most famous shopping and entertainment complex.

The largest shopping center in Nashville, Opry Mills, is at the start of Opryland Avenue.

Across the street, you can find the Grand Ole Opry concert hall and a few feet away is the Gaylord Opryland Resort and Convention Center.

The latter is attractive for its gardens, amphitheaters, a water park, and modern facilities.

There are several bus stops on Opry Mills Avenue, which allow you to easily move to central Nashville.

Opryland offers mixed accommodation with a variety of costs, within the Convention Center, you can find the most luxurious resort style hotel in the area.