Where to Stay in Salamanca – Best Areas and Hotels

Where to stay in Salamanca – What you need to know

Salamanca is a beautiful city located in the central area of Spain, about two hours northwest of Madrid, in the autonomous community of Castilla y León.

This city, which is a World Heritage Site, stands out in a special way for its culture and gastronomy. 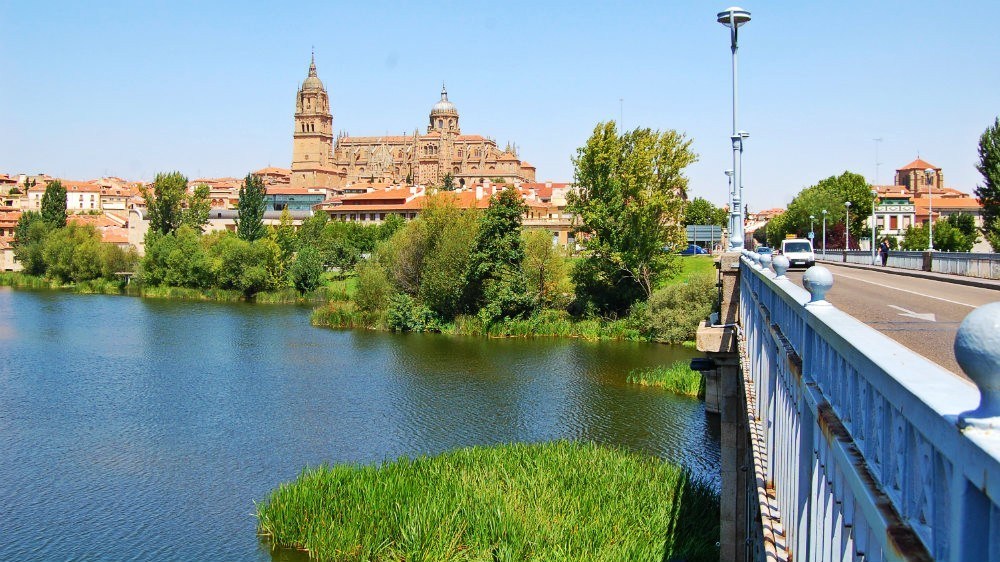 Where to stay in Salamanca – Best areas and hotels

An interesting fact is that Salamanca is a university city par excellence, known as the city of knowledge.

Salamanca has a continental Mediterranean climate, with cold winters and very hot summers. Therefore, the best seasons to visit Salamanca are autumn and spring.

In the summer, thousands of students visit Salamanca, attracted by the Spanish courses for foreigners in the university.

Getting to Salamanca from Madrid is easy, through MD and LD trains (Medium and Long Distance) or buses. The city also has a small airport located in the nearby town of Matacán, which at certain times of the year offers charter and regular flights to various Spanish destinations and other European countries.

The best hotels in Salamanca.

Hostels and cheap stays in Salamanca.

Looking for independence? Book an apartment in Salamanca.

The Historic Centre of Salamanca, also known as Old City, is, as its name suggests, the heart of the city.

This area, declared a World Heritage Site by Unesco, stands out for its medieval character, full of charming streets.

The starting point to visit the Historical Centre is the Plaza Mayor, a square surrounded by the main points of interest of the city, including the Casa de las Conchas, the Roman Bridge or the Garden of Calixto and Melibea (monument to La Celestina).

The cobbled streets of this area invite you to get lost in a journey through time.

Other attractions in this area are the Rua Mayor, and the Clavero Tower, religious buildings, palaces and museums.

The Historic Centre of Salamanca is also the area of ​​tapas for excellence. Here, the bars and terraces are full of people at lunch and dinner times.

The Historic Centre is the best area to stay in Salamanca for being the epicentre of Salamanca’s life and for its proximity to most of the city’s tourist attractions.

Where to stay in Salamanca – Historic Centre

Salamanca – Historical Centre – Click to see all hotels on a map

Staying near the Railway Station of Salamanca is an excellent option for travellers who are making a train route through Castilla y León, as it connects with Ávila, Palencia, Valladolid and Madrid.

While it is true that this area, located about 20 minutes walk from the Plaza Mayor, has no great attractions, it has bus stops that make it easy to move to other parts of the city. The Medium Distance trains connect this great terminal with the stopping place of the Alamedilla, located in the centre of the city.

On the other hand, hotels around the Salamanca Train Station tend to be cheaper than in the more central neighbourhoods, so it is a good place to stay in Salamanca if you do not have a big budget.

Best areas to stay in Salamanca – Near the RENFE station

Salamanca – Train Station – Click to see all hotels on a map

3. Arrabal and south of the River Tormes

Located on the left bank of the River Tormes, to the southeast of the Historic Centre, is the neighbourhood of Arrabal del Puente.

El Tormes is the most important river in the province of Salamanca and the backbone of the province from southeast to northwest.

El Arrabal and its surrounding area are easily accessible on foot. The Historic Centre is a 10-minute walk away.

The groves that flank the banks make up one of the most attractive and biodiverse forests of the province of Salamanca.

On the banks of the Tormes, there are several monuments, including the palaces of Salina and Orellana and the towers of Clavero and Abrantes.

Attractions in this area include the Museum of the History of the Automotive, the two churches of the Apostle James and the two-thousandth Roman bridge.

Where to stay in Salamanca – Arrabal

Best area to stay in Salamanca