Where to Stay in Toledo – Best Areas and Hotels

Where to stay in Toledo, Spain – What you need to know

Toledo is located in the central area of Spain, about 71 kilometres from Madrid. This charming city is the capital of the homonymous province and also of the autonomous community of Castille-La Mancha. 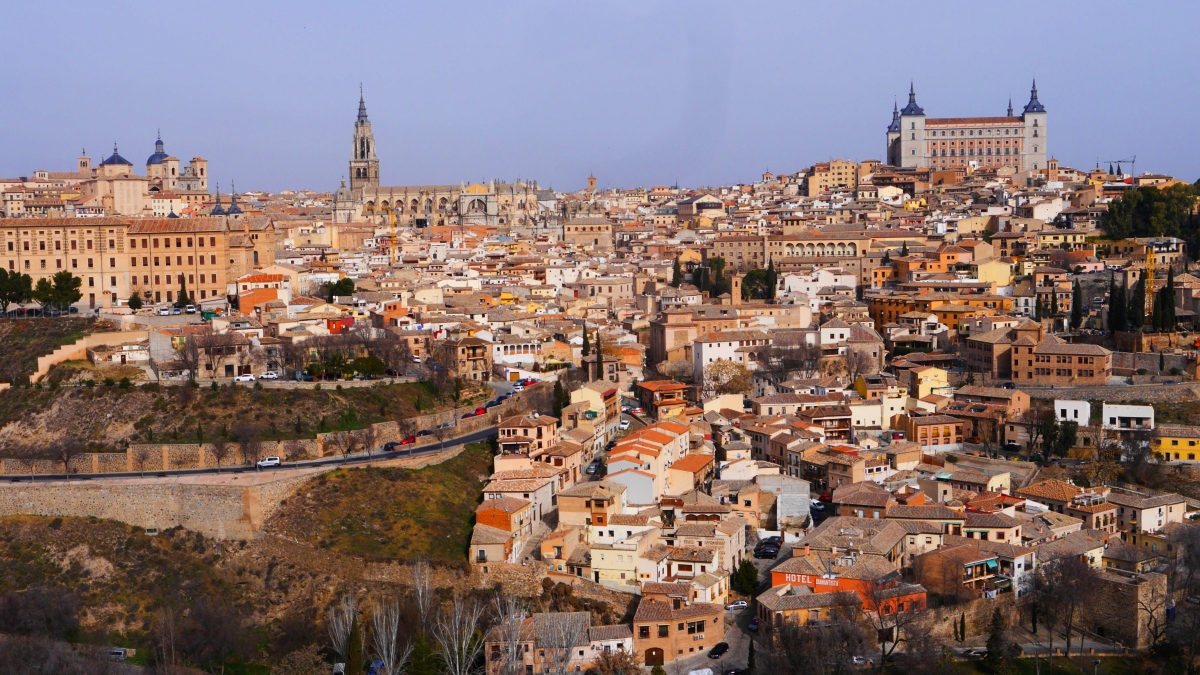 Where to Stay in Toledo – Best Areas and Hotels

The past of Toledo is probably one of the most interesting of the Iberian Peninsula, which is why the city was declared a World Heritage Site by UNESCO.

While it is true that many see Toledo as a small stopover while touring Spain, this magical city deserves to be thoroughly explored, so staying in Toledo for, at least, a weekend, is recommendable.

The best hotels to stay in Toledo, Spain.

Hostels and cheap stays in Toledo.

Looking for independence? Book an apartment in Toledo.

Where to stay in Toledo: A summary

If you don’t have the time or the patience to read the full post, here’s a short summary with our recommended areas to stay in Toledo. Keep on reading to discover more information about each of the neighbourhoods.

1. Near the Alcazar (east of the Historic Centre)

Staying in the vicinity of the Alcazar allows you to have excellent views of Toledo and the Tagus River, ideal to capture the best views during your stay in the capital of Castille-La Mancha.

This area is located east of the Historic Centre and stands out, as expected, for hosting the Alcazar of Toledo, an impressive fortress that, nowadays, functions as the Military Museum and is one of the main attractions of the city.

In this area, there is also the Zocodover Square, where, in the past, the Toledo markets were installed. The square is surrounded by restaurants, tapas bars and shops that make it one of the best areas to stay in Toledo, Spain.

In the surroundings of the Alcazar, you will find a variety of accommodation at different costs, from apartments to hostels, hotels and boutique hotels.

From here, you can walk to most of the attractions, always taking into account that the closer you get to the Alcazar, the streets become steeper and wearing comfortable shoes is a priority.

Staying near the Alcazar – Best areas to stay in Toledo

Toledo – Alcazar – Click to see all hotels on a map

2. Jewish quarter and west of the Historic Centre

The Jewish Quarter of Toledo is located to the southwest of the city and includes the area where the Sephardic Jews lived (a name given to the Jews of the Iberian Peninsula) during the Middle Ages, before being expelled by the Catholic Monarchs in the year 1492.

In this historic district, two of the most important synagogues in Spain still stand, although they were later converted into Catholic churches: The Transit Synagogue (home of the Sephardic Museum) and the Santa Maria la Blanca Synagogue, with an impressive interior of Mudejar style because it was built by Muslims.

To the west of the Historic Centre of Toledo, there are also other popular attractions such as the Monastery of San Juan de Los Reyes and the El Greco Museum, dedicated to one of the most important Spanish painters of the Renaissance period.

The surroundings of the Jewish Quarter and the west of Toledo are among the best areas to stay in Toledo to be close to most of the attractions of the city and enjoy a variety of accommodation.

The Toledo AVE Train Station is located east of the walled city and is the main gateway to the city, with high-speed trains connecting it to Madrid daily.

It is a spectacular Mudejar-style building from where you can hire a tour through the capital of Castille-La Mancha, ideal for those who visit the city for a short time.

Staying near the AVE train station in Toledo allows you to enjoy tranquillity during your stay, as it is relatively far from the hustle and bustle of the Historic Centre and other areas more popular with tourists.

However, this area connects with the main attractions of Toledo via bus and is a 20-minutes walk from the centre.

The surroundings of the railway station of Toledo have accommodation of all kinds (although the apartments predominate) and are one of the best areas to stay in Toledo for short stays.

To the north of the walled city of Toledo, there are attractions such as the Tavera Hospital (an art museum inside a Renaissance palace), the remains of the Roman Circus and the Bullring of Toledo

It is known for being a mainly administrative area, with buildings such as the Courts, the Housing Office and the Health Service of Castille-La Mancha, which gives the area a quiet character.

This area has several bus stops along Avenida de la Reconquista and Avenida General Villalba. Therefore, going to other Toledo neighbourhoods is an easy task.

An advantage of staying in the north of Toledo is that the cost of accommodation is low compared to the more tourist areas of the so-called city of the three cultures.

The north of Toledo is one of the best areas to stay in Toledo if you travel on a budget.

Staying near the Bullring of Toledo – Best areas to stay in Toledo, Spain

Toledo -North Toledo – Click to see all hotels on a map

Where to stay in Toledo: Useful information

Toledo is known as the “city of the three cultures” because it was the home of Muslims, Jews and Christians simultaneously.

Therefore, Mudejar, Gothic, Renaissance and Baroque architecture live in the streets of Toledo. It is also called “imperial city” because it housed the main headquarters of the Carlos I court.

The Historic Centre of Toledo or walled city is on a Hill crowned by the Alcazar, one of its most important buildings that used to be the headquarters of the Roman army (See accommodation in Toledo City Centre).

Other attractions of the Historic Centre of Toledo are the Zocodover Square, the Cathedral of Toledo, the impressive Synagogue of Santa María la Blanca and the Monastery of San Juan de Los Reyes.

When it comes to getting to Toledo, you can take the AVANT high-speed train from Madrid (Atocha station) to the Toledo Station, which allows you to reach the capital of Castille-La Mancha in 30 minutes (See hotels near Toledo’s train station).

On the other hand, the best time to travel to Toledo is autumn, to avoid the suffocating summer heat that makes walking the steep streets of Toledo complicated. Spring is also a good option, but you have to take precautions against possible rains and strong winds from the Tagus River, which crosses the city.

As far as public transport is concerned, Toledo has buses that connect a large part of its areas. Renting a car in Toledo is another possibility, but driving through its small streets can be a challenge.

Best area to stay in Toledo