Where to Stay in Segovia – Best Areas and Hotels

Where to Stay in Segovia – What You Need to Know

Segovia is a city located in the Autonomous Community of Castilla y León.

Located inside the Iberian Peninsula, about 90 kilometres northwest of Madrid, Segovia was founded by the Romans as a military Castro. 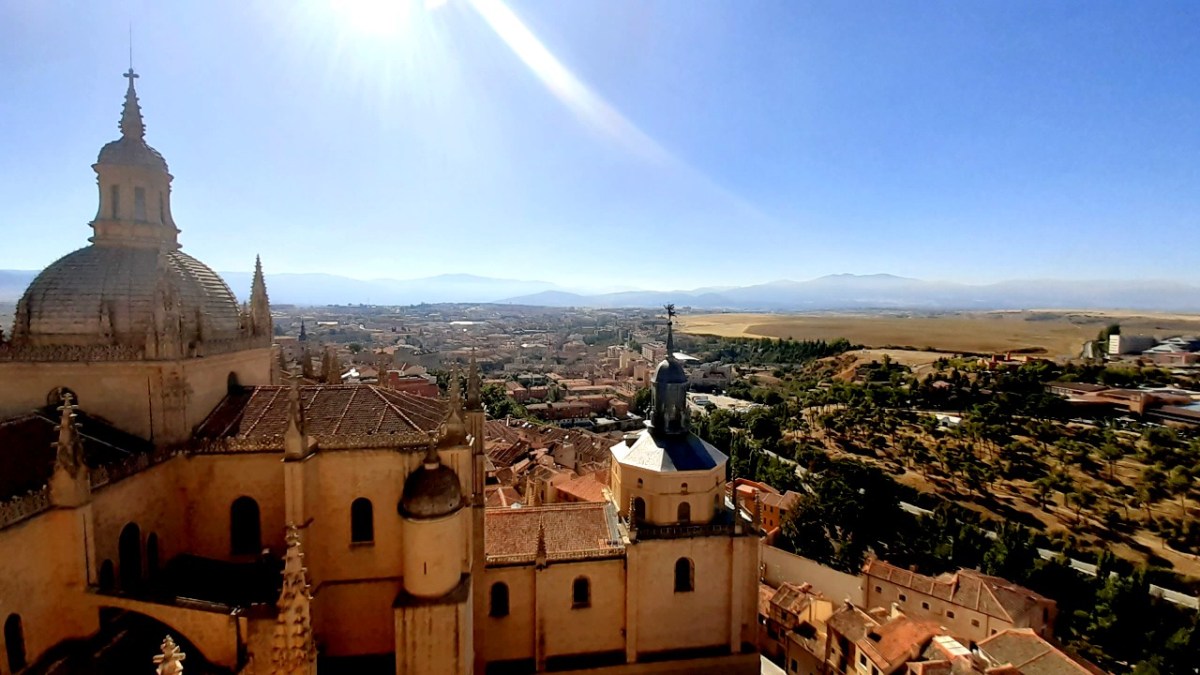 Where to Stay in Segovia – Best Areas and Hotels

This Castilian city offers several routes to know its history, its art and its culture, so there are plenty of reasons to visit it, given the beauty of its geography, its surroundings, its buildings, and streets.

Segovia is famous for its impressive and well-preserved Roman Aqueduct, its Cathedral, its imposing Alcazar and other important monuments, such as its set of Romanesque churches and convents.

This Castilian city does not have its own airport but uses the nearby airfields of Madrid – Barajas, and Valladolid

Segovia is connected by high-speed trains with both Madrid and Valladolid. The high-speed station is a bit far from the City Centre, which can be reached by taking lines 11 and 12 of urban buses or taxi (around € 10).

The climate of Segovia is determined by its high altitude and its position away from the coast, so the best time of the year to visit it go from the end of spring until the beginning of autumn.

This Castilian city is cozy and small, so the best area to stay in Segovia is its Historic Centre, where you can find attractions such as the Alcazar, the Cathedral or the Jewish Quarter . (See accommodation in Segovia City Centre).

The best hotels to stay in Segovia, Spain.

Looking for independence? Book an apartment in Segovia.

Pensions, B&B and guesthouses in Segovia.

The best areas to stay in Segovia, Spain

The Jewish Quarter is the most charming neighbourhood in Segovia.

This area, located in the old walled enclosure of the city, extends to the southwest of the cathedral and is made up of a tangle of narrow, medieval, cobbled streets.

Among other attractions, the former Segovian Jewish Quarter includes the Greater Synagogue, and the street of the Old Jewish Quarter.

Very close to this area is the imposing Alcazar de Segovia, a spectacular, boat-shaped fortress dating back to Roman times, although it has been expanded several times.

The Segovian fortress is located on a rocky hill at the confluence of two rivers and is surrounded by gardens, parks and tree-lined paths. The interior of the castle can be visited.

The nearby Segovia Cathedral is located at the highest point in the city. It was built in the 16th century in a late Gothic style.

From its tower, you can see spectacular views of the Castilian city.

In general, the Historic Centre of is the most charming area to stay in Segovia.

The walled enclosure of Segovia is also close to the San Millán neighbourhood and the Aqueduct and has many dining, nightlife and shopping options, making it an excellent area where to stay in Segovia .

Where to stay in Segovia, Spain – Near the Alcázar

The gateway to the Historic Centre of Segovia is the Roman Aqueduct, the symbol of the city, which was built to supply water to the Alcazar, and is one of the best-preserved Roman engineering works in the world.

This spectacular architectural monument reaches its maximum height around the Artillery Square, a roundabout at the foot of the medieval walls where numerous bus and taxi lines converge (including those that go to Guiomar station).

In addition to the breathtaking views of the aqueduct and the medieval walls, the Artillery Square is famous for its statue of the “Capitoline Wolf”, which represents the myth of the founding of Rome.

This large area, which is framed within the neighbourhood of San Millán, was an extramural space dedicated to tillage in medieval times. Currently, the area that borders the spectacular aqueduct has become the tourist heart of the city, and an important gastronomic and nightlife centre.

Other attractions in the area include the Romanesque churches of San Millán and San Clemente. 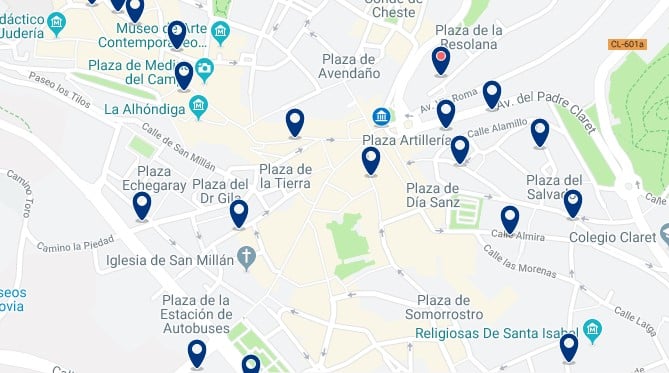 3. Near the Segovia train station and the Nueva Segovia neighbourhood

The Segovia railway station (which should not be confused with the Guiomar high-speed train station) is located on Obispo de Quesada street, about 3 kilometres south of the Historic Centre.

This station receives Medium Distance trains from different points of the peninsula, and provides services between 7:00 and 21:00 from Monday to Friday, and from 9:00 to 21:00 on weekends and holidays.

The area around this station has a quiet atmosphere and cheap hotels, hostels and apartments for an economical stay in Segovia.

Being relatively far from the tourist attractions of Segovia, it is recommended to use the city bus or taxi to get around this area or to other places.

Where to stay in Segovia, Spain – Near the train station

Best area to stay in Segovia