Where to Stay in Linz, Austria: Best Areas and Hotels

Where to Stay in Linz – What You Need to Know

Linz is the capital of the Bundesland (federal state) of Upper Austria (Oberösterreich), located in the centre-west of the Alpine country, halfway between Salzburg and Vienna.

This city, the third-largest in the country after Vienna and Graz, is located on the banks of the Danube River.

With a history that goes back at least 400 BC, Linz (then known as Lentia) began to gain importance as a Roman city because of its strategic position along the Danube River.

Linz is famous for its medieval, baroque and neo-Gothic architecture, but mainly for the new and modern cultural facilities that have given it international projection in recent years. Wonders of modern technology such as the Ars Electronica Centre and the Lentos pushed Linz to become, during 2009, the European Capital of Culture.

When choosing the best areas to stay in Linz, the Old Town or Innere Stadt is the best alternative, as it is where most of its attractions are located (See accommodation in Innere Stadt).

The best hotels to stay in Linz

Hostels and cheap stays in Linz

Would you like independence? Book an apartment in Linz

Inns, B&Bs and guest houses in several aras around Linz

Best Areas to Stay in Linz: A Summary

If you don’t have the time or the patience to read the full article, here you have a summary of our recommended areas to stay in Linz.

Innere Stadt means “inner city” and is, as the name implies, the heart of Linz.

Unlike Salzburg, the Historic Centre of Linz lacks the medieval charm typical of this region. However, the area has some tourist attractions and historic buildings worth mentioning.

The Linzer Landstraße is the most famous street in Linz and runs through the Old Town. Partially pedestrianized, it is the most important commercial street in the city and it has several tram stops.

Altstadt is built around Hauptplatz, the great main square, surrounded by coffee shops and baroque buildings such as the Old Town Hall.

The old cathedral, dating from the 17th century, has an opulent interior, and the immense New Cathedral offers views from its bell tower.

The hill of the Schlossmuseum has exhibits of history, while the ultramodern building of the Lentos Kunstmuseum, on the bank of the river, focuses on Austrian art.

Accommodation in the Altstadt is very varied and, although the costs of the hotels are usually higher than those of the most peripheral areas, it is worth staying in this area to remain close to the attractions of the city.

Innere Stadt / Altstadt is the best area to stay in Linz if you are looking for comfort, good connections and budget is not a problem. 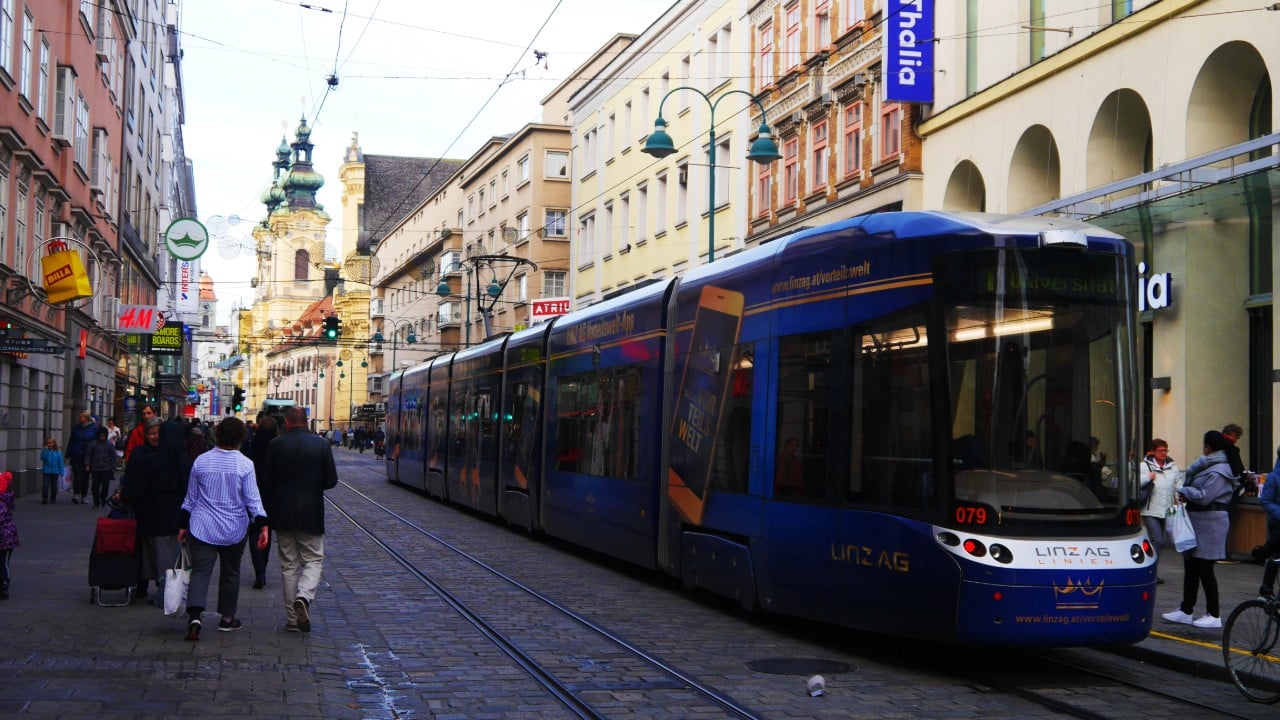 Old Town – Where to stay in Linz

Linz – Altstadt – Click to see all hotels on a map

The central train station or Linz (Hauptbahnhof) is the main transport hub of the city, and one of the most important railway stations in Austria.

Located 2 kilometres south of the Old Town, this modern station was actually one of the first to be built throughout the European continent.

Linz Hauptbahnhof has numerous railway connections with Germany and with all corners of Austria. Its position, halfway between Salzburg and Vienna, makes services frequent in both directions.

The area around the station is home to some of the city’s business skyscrapers, making it an excellent area to stay in Linz for business travellers.

Linz Hauptbahnhof is located about a 15 minutes walk from the City Centre, and also offers tram connections.

Where to stay in Linz – Near the central train station

Linz – Hauptbahnhof – Click to see all hotels on a map

3. North of the Danube

The northern part of the Danube in Linz comprises several residential neighbourhoods, as well as modern-style office complexes.

This large area, with wide avenues and green spaces, lacks the charm of the Altstadt but offers several points of interest that make it one of the best areas to stay in Linz.

Probably the most recognized icon in this area is the imposing Ars Electronica Centre, an electronic arts centre located opposite of the Town Hall of Linz, on the right side of the Nibelungenbrücke bridge.

Its colourful light show and its reflection on the waters of the Danube are a must-see in Linz.

The northern part of the river is very well-connected with the rest of the city, thanks to the tram and the Linz / Donau Urfahr station, which is second in traffic in the city and handles a good part of the commuter traffic of the Austrian city. 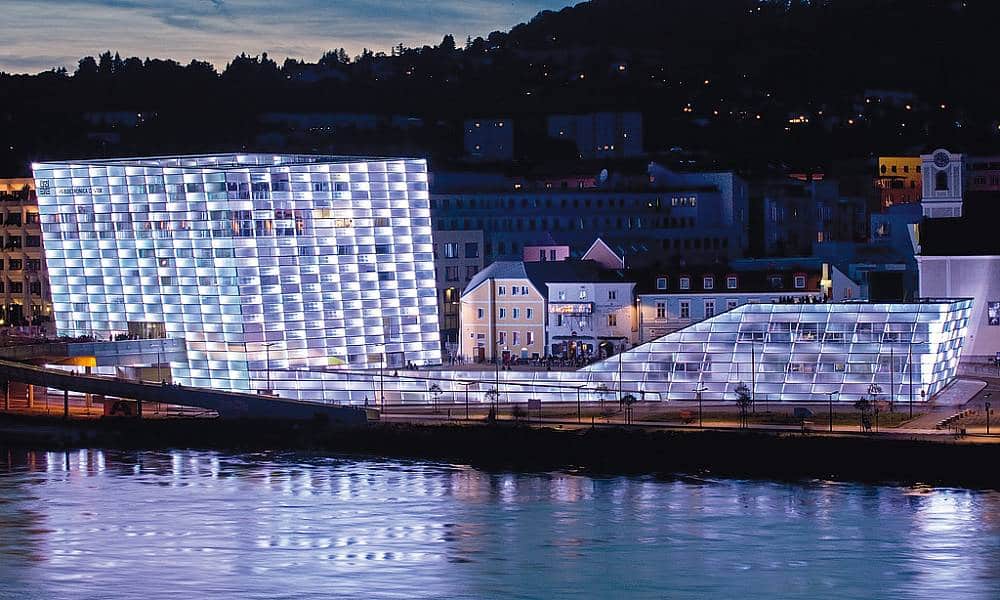 Best districts to stay in Linz, Austria – North of the Danube 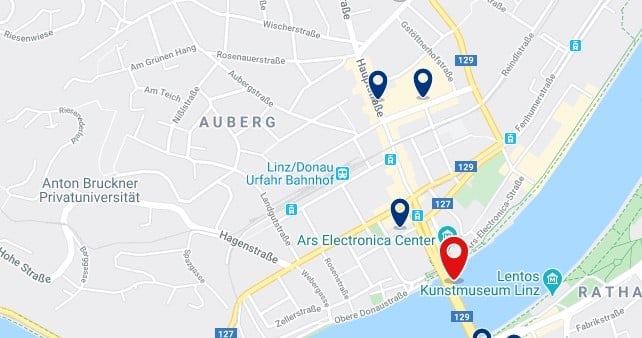 Where to stay in Linz: Useful information

The main square of Linz (Hauptplatz), along with the Old Town (Altstadt), is the heart of the city. Unlike other cities, the main square allows tram traffic and even, to some extent, cars. See accommodation in Linz City Centre.

There are a lot of churches that you can visit in Linz. But if you only have time for one, then Mariä-Empfängnis-Dom, also known as Mariendom, is the most recommended.

Another museum to consider is the Lentos Art Museum, which is also located on the side of the Old Town of the Danube River. Even from the outside, this museum of 130 metres long is, architecturally, very impressive.

The Flughafen Linz airport is about 12 km from the City Centre. Bus line 601 runs between the airport and the Hauptbahnhof every 10-20 minutes. See accommodation near Linz’ Airport.

All trains passing through the city stop at Linz Hauptbahnhof, about 20 minutes walk from the Altstadt (Old Town). In front of the train station are the main bus terminal and the taxis. See accommodation near Linz Hbf.

As far as public transport is concerned, Linz has an excellent transport system. Bus and tram services connect most of the destinations within the city. However, most of the Altstadt (Old Town) is pedestrianized.

Accommodation costs in Linz are usually high, although the city is cheaper than Vienna or Salzburg. Backpacking options are very limited. A three-star hotel in the City Centre can cost between €60 and €100 depending on the season, so it is recommended to book in advance and research all the accommodation options of the city before travelling. See accommodation in Linz sorted by price.