Where to Stay in Salzburg – Best Areas and Hotels

Where to Stay in Salzburg – What You Need to Know

Salzburg is the capital of the Bundesland (federal state) of Salzburg, in central-northern Austria.

It is located on both banks of the Salzach River, near the Northern Alps and the German border. 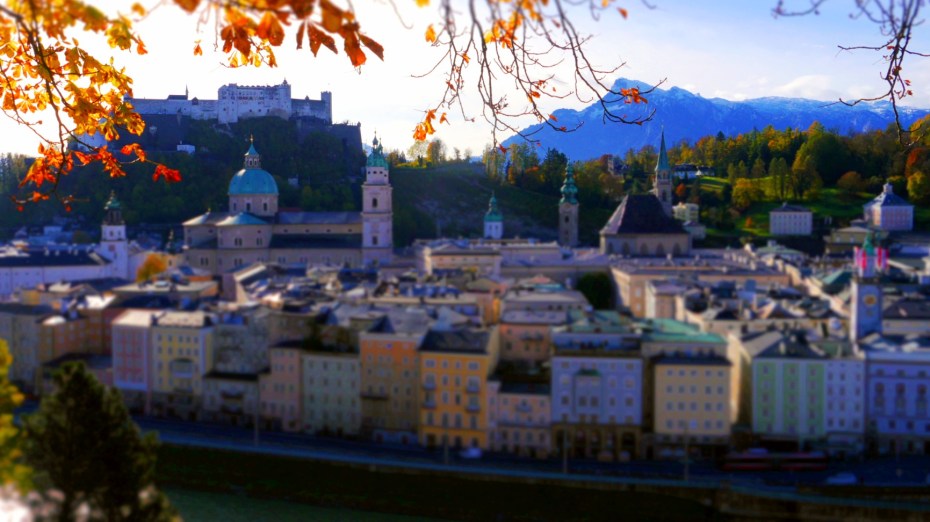 Where to Stay in Salzburg – Best Areas and Hotels

The name of Salzburg means “salt fortress”. For thousands of years, salt has been extracted from the area around the city. This “white gold” made Salzburg a powerful commercial city.

Salzburg is famous for its baroque architecture, which can be seen throughout the Old Town, which survived the Second World War and remains practically intact, so most of these ancient baroque buildings are in their original state. In 1996, the city of Salzburg became a World Heritage Site by UNESCO.

When choosing the best areas to stay in Salzburg, the Historic Centre or Altstadt is the best alternative, as it is where most of its attractions and baroque architecture are located (See accommodation in Salzburg Altstadt).

The best hotels to stay in Salzburg, Austria.

Hostels and cheap stays in different areas of Salzburg.

Looking for independence? Book an apartment in Salzburg.

Pensions and B&B in different areas of Salzburg.

Where to stay in Salzburg: A Summary

If you don’t have the time or the patience to read the full article, here you have a summary of our recommended areas to stay in Salzburg.

Altstadt, or Old Town, is, as the name implies, the heart of the historic city of Salzburg and one of its most important sites in Austria, declared World Heritage by UNESCO.

This picturesque neighbourhood of narrow streets is considered one of the architectural jewels of Europe, thanks to its large number of medieval and baroque historical buildings in perfect condition.

Altstadt Salzburg also includes the Kapuzinerberg and Mönchsberg hills, considered the green lungs of the city.

Here, you will find most of Salzburg’s main attractions, including its cathedral, the Mozart museum, the Hohensalzburg fortress or the Residenz palace.

Getting around the Old Town of Salzburg is easy if you like to walk since a good part of the streets are totally or partially pedestrianized. To move to other places in the city, there are several trolleybus stops along the avenues that border the Salzach.

The hotel offer in the area is very varied and, although accommodation costs tend to be higher than those in the most peripheral areas, it is well worth investing a little more budget to be close to the attractions of the city.

Given all these factors, we can say that Altstadt is the best area to stay in Salzburg if you are looking for comfort, good connections and budget is not a problem. 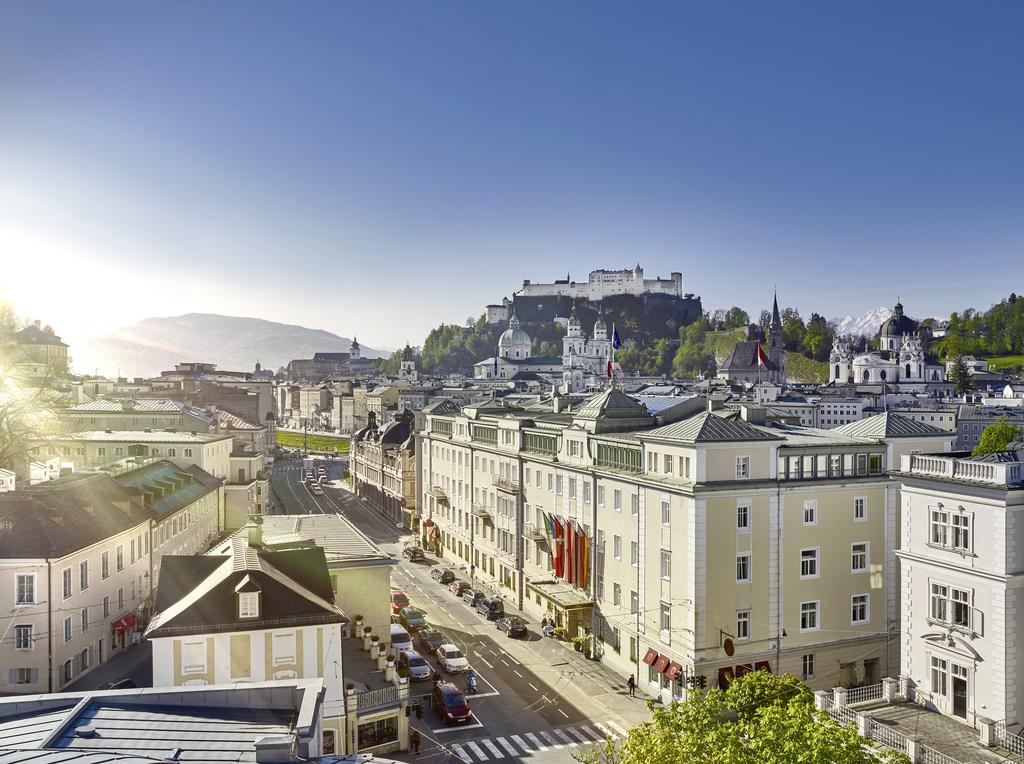 Where to stay in Salzburg – Altstadt or Old Town 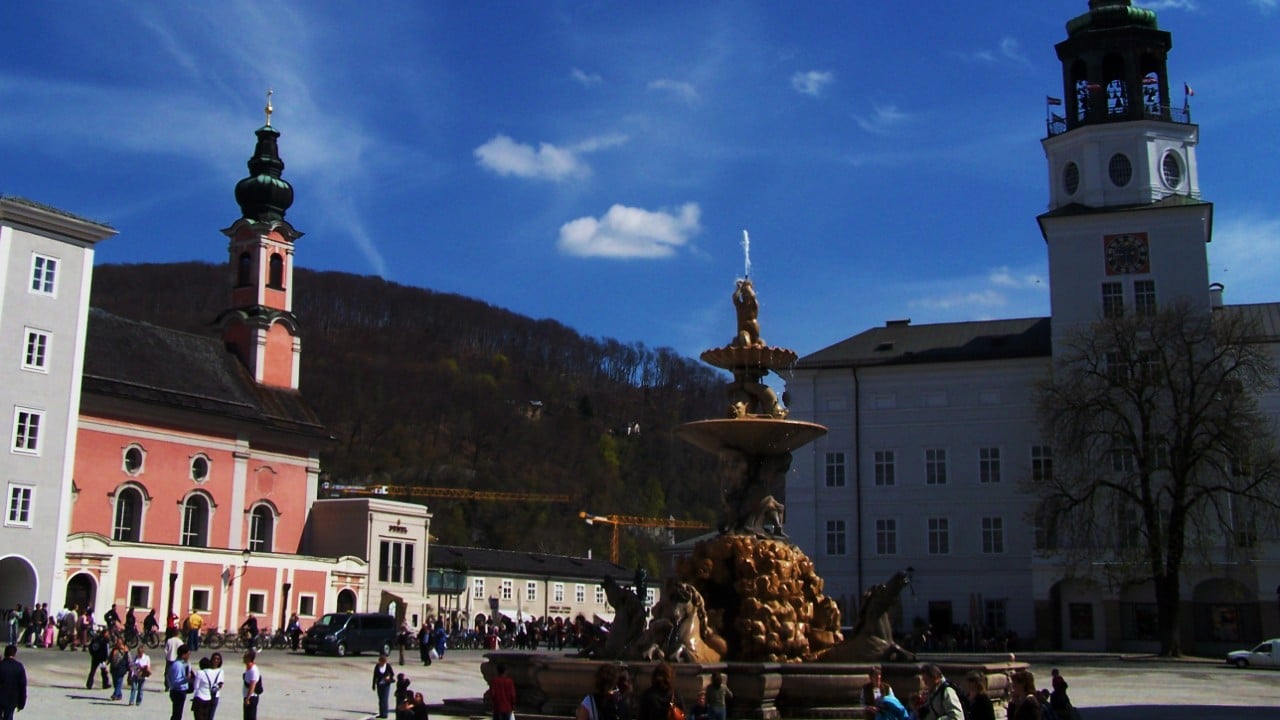 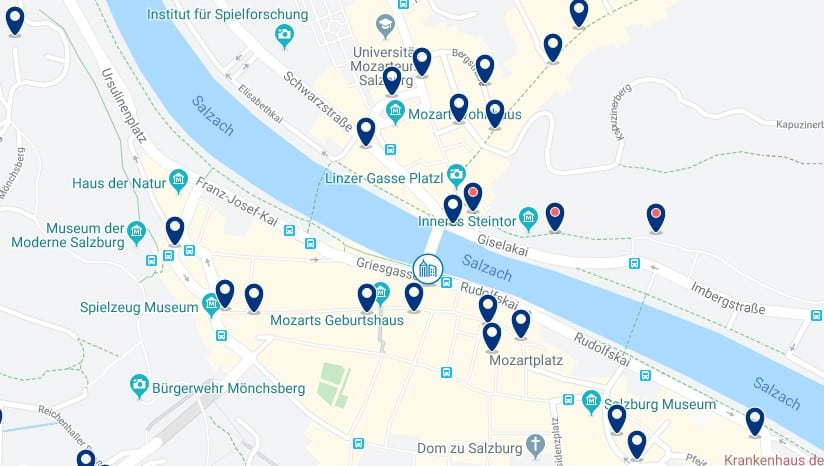 Salzburg – Altstadt – Click to see all hotels on a map

The central train station or Salzburg Hauptbahnhof is the main transport hub of the city and the Austrian northwest.

Located 3 kilometres north of the historic centre, in the district of Elisabeth-Vorstadt, this station marked an important milestone for the city.

Salzburg Hauptbahnhof has numerous railway connections with neighbouring Germany (especially Munich and Bavaria) and with all corners of Austria such as Vienna, Graz, Innsbruck or Linz. In addition to long-distance trains to visit other areas of Austria or Bavaria, Salzburg has a 35km network of commuter trains that reach many of the surrounding villages.

The area around the station is probably the cheapest area to stay in Salzburg and has a variety of budget hotels, tourist apartments and simple pensions, in addition to the occasional business-type accommodation.

In Südtiroler Platz, you will find the trolleybus stop, which reaches the city centre in 10 minutes. If you decide to walk to Altstadt, Mozart’s House is about 25 minutes away on foot.

Elisabeth-Vorstadt and neighbouring Neustadt are important business areas and host much of Salzburg’s modern buildings and skyscrapers, so it could also be considered an excellent area to stay in Salzburg for business travellers.

Cheap area to stay in Salzburg – Near the central train station

Best neighbourhood to stay in Salzburg – Near the central train station 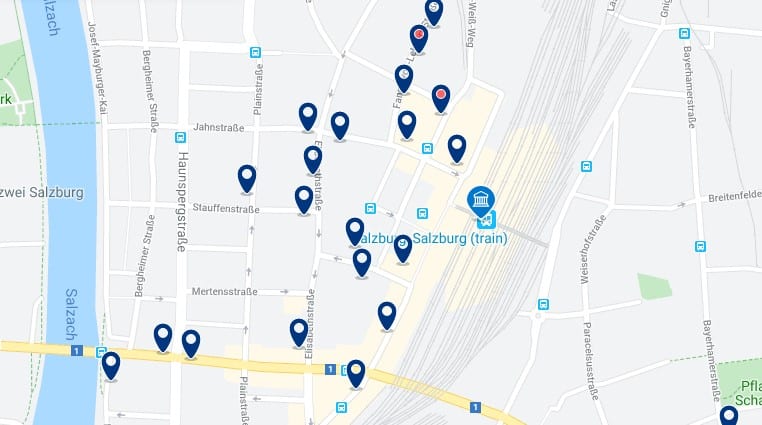 Salzburg – Hauptbahnhof – Click to see all hotels on a map

The Neustadt (New Town) of Salzburg is located in the area between the historic centre and the city’s central train station.

This district of Salzburg was created after the demolition of the great walls that defended the city, in the area around the Andräkirche (St. Andrew’s Church).

It is a mostly residential district. However, being between two of the most dynamic areas of the city, Neustadt is one of the best areas to stay in Salzburg to be equidistant from attractions and the central train station.

In addition to being a great option to stay in Salzburg for tourists, Neustadt is probably the best area for business travellers and congresses, as it hosts the Salzburg Congress, one of Austria’s main convention centres.

Other unmissable attractions in this area are the Mirabell Palace or the Salzburg synagogue.

Although those who decide to stay in this area can walk to virtually the entire city, Neustadt has several bus stops and trolleybuses that connect it to the centre and the Hauptbahnhof.

Where to stay in Salzburg – Neustadt 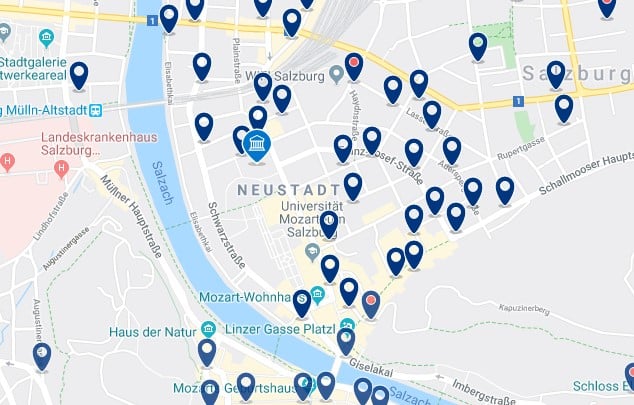 Salzburg – Neustadt – Click to see all hotels on a map

Mülln and Maxglan are two districts of Salzburg located to the left of the Salzach River and north of the historic centre.

Mülln is, probably, the oldest suburb of the medieval fortified city of Salzburg and the area known as Inneres Mülln is nowadays a UNESCO World Heritage Site.

This charming medieval area can be considered one of the best-kept secrets of Salzburg, as there are not many tourists who venture here.

The adjacent Maxglan district is one of the largest in the city, and hosts the Salzburg International Airport.

Maxglan is a more casual and youthful district than the central areas of the city.

It should be noted that, although Maxglan is not the most central area to stay in Salzburg, its small family pensions and hotels are, usually, much cheaper than those of Altstadt or Neustadt.

Salzburg – Mülln & Maxglan – Click to see all hotels on a map

Where to stay in Salzburg: Useful information

Salzburg is the fourth most populous city in Austria. Although this area of Salzach has been inhabited since prehistoric times, the first Celtic settlement known in present-day Salzburg dates back to the fifteenth century B.C. Conquered later by Romans and Germans, the city was abandoned and founded with its current name in 696 A.D. as ecclesiastical headquarters.

Dominating the city of Salzburg is the Hohensalzburg fortress. Built-in 1077, it was one of the largest castles in Europe. Its silhouette dominates the historic centre, which is the best area to stay in Salzburg. See accommodation in Salzburg’s Historic Centre.

Other attractions in Salzburg include its cathedral, consecrated in 774 and rebuilt several times and Mozart’s birthplace.

This Austrian city has been considered one of the epicentres of music for centuries and International Festival such as recitals, orchestral and chamber music concerts, sacred music, opera and theatre.

W.A. airport Mozart is just 4 km from the city centre. Bus line 2 runs between the airport and the Hauptbahnhof every 10-20 minutes.
See hotels near Salzburg’s airport.

All trains passing through the city stop at Salzburg Hauptbahnhof, about 20 minutes walk from the Altstadt (old town). In front of the train station are the main bus terminal and the taxi rank. See accommodation near Salzburg Hbf.

As far as public transport is concerned, Salzburg has an excellent transport system. You can take a bus or trolleybus to most destinations within the city. However, most of the Altstadt (old town) is pedestrianized.

Accommodation costs in Salzburg are usually very high for a city of its size and backpacking options are very limited. A three-star hotel in the city centre can cost between € 70 and € 100 depending on the season, so it is recommended to book in advance and research all the accommodation options of the city before travelling. See accommodation in Salzburg sorted by price.

Best areas to stay in Salzburg