A Visit to the Natural History Museum in Berlin

The number of families with small children walking towards the museum should have been a warning. If you hate children, Sunday is definitely not the best day to visit a place with dinosaur skeletons and stuffed animals.

The Museum für Naturkunde, also known as Naturkundemuseum, was founded in 1810 and it’s one of the oldest scientific institutions in Europe. It is located in a palace-like building north of the central Mitte district, close to the Naturkundemuseum U-Bahn Station and the Berlin Central Station (Hauptbahnhof).

Its collection consists of more than 30 million pieces of paleontology, zoology and mineralogy specimens. Naturkunde is particularly famous for two specific items; the tallest mounted dinosaur fossil in the world, belonging to a Giraffatitan and the Archaeopteryx, the oldest bird discovered to date.

Upon entering the museum and paying the entrance fee to arguably the unfriendliest museum cashier in Berlin, I proceeded to the wardrobe to leave my multiple coats.

As I should have suspected, the museum was full of ecstatic kids jumping about the fossils and dissected animals and their parents, most which sported a “somebody please kill me” expression.

The first room you come across is the Hall of Dinosaurs, some sort of large courtyard and hub of the main museum building. In the center of the room you can find four of its most famous inhabitants; the mounted skeletons of the Kentrosaurus, the Diplodocus, the Giraffatitan and the Dicraeosaurus.

The monstrous Giraffatitan’s fossilized skeleton was excavated by German paleontologist Werner Janensch between 1909 and 1913 in Tanzania, its bones actually come from two specimens of similar size. Its 13 meters high and 22 long make it the tallest mounted dinosaur fossil in the world.

Right from after the Hall of Dinosaurs, you get to the space titled “Masterpieces of Taxidermy”, which displays some of the best taxidermy work performed by the museum staff through time and the processes undertaken to get the perfect dissected animal.

This room is the final resting place for some of the Berlin Zoo celebrities once they die, for example Knut, the famous polar bear.

Knut was born in December 2006 in the Berlin Zoo. He was rejected by his mother and raised by the staff. He became the first specimen of polar bear to survive their childhood at the zoo.

He rose to fame in 2007, after the German tabloid Bild published a story in which an environmentalist expressed concern about the unorthodox way Knut was being brought up and demanded his return to the wild.

Far from accomplishing this, the column in Bild attracted a large number of national and international attention. In a very short time, a citizen platform was created and there were demonstrations outside of the zoo, demanding for Knut to stay at his birthplace.

The bear became the star of the zoo and a media and merchandising success. 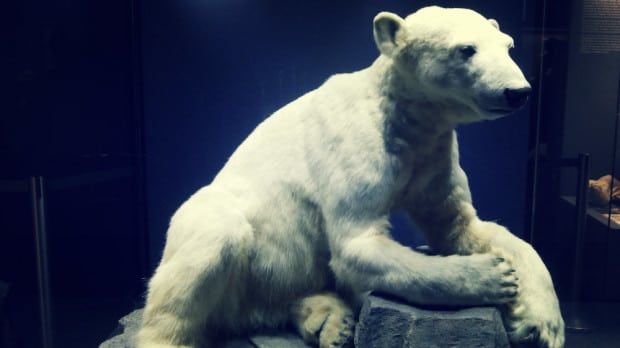 Other famous animals in this room include Bobby, the gorilla star of the Berlin Zoo during the 20s and 30s, and the hippo whose father was one of the only animals to survive World War II at the Berlin Zoo.

Almost all taxidermy works exposed in this room are of excellent quality, including some specimens dating from before the War. In fact, the techniques and procedures currently used to dissect animals have changed very little since the 1930’s.

There are however, less fortunate works as well. 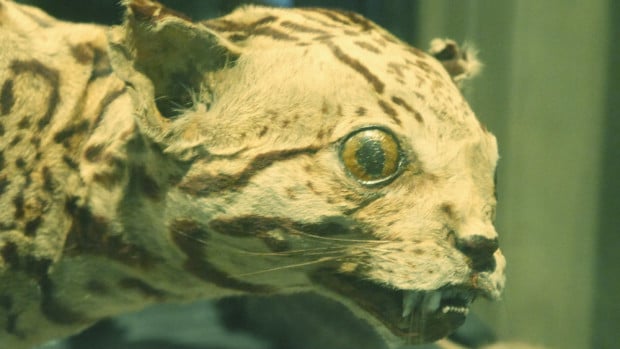 From here, the visit becomes a little tedious, with a room surrounded by tons of jars with fish in formaldehyde, a mineralogical collection and giant reproductions of insects.

The “Evolution in Action” part of the exhibition is worth mentioning. It includes dissected specimens of long extinct animals such as the Quagga, Huia or the Tasmanian tiger.

I ended my visit with a temporary exhibition around pandas, in which several stuffed specimens, together with furs and bones from the last 200 years were displayed. 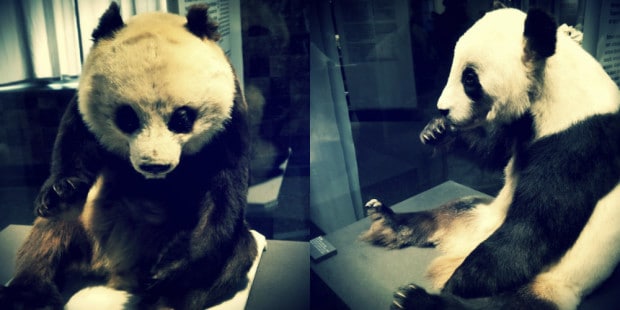 At the end I survived the horde of children and enjoyed the museum as if I were one myself.

Schedules and prices for the Museum of Natural Sciences in Berlin