Where to Stay in Saint Petersburg – Best Areas and Hotels

Where to stay in Saint Petersburg – What you need to know

St. Petersburg is one of the most famous cities in Russia, the second largest urban centre in the country is located in the Leningrad region. 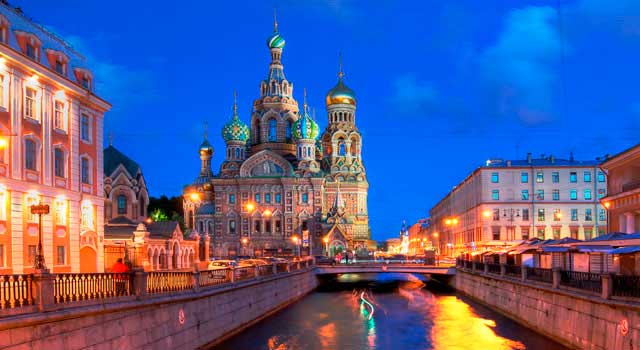 Where to stay in Saint Petersburg, Russia – Best areas and hotels

Saint Petersburg is one of the most expensive cities in northeastern Europe. The land of Tchaikovsky, Pushkin and Dostoevsky (illustrious Russian composers and writers) receives thousands of visitors a year thanks to its amazing sights, especially suited for art and culture enthusiasts.

Its name takes us to monarchical times, during the government of Peter the Great. Some claim that Saint Petersburg’s name was a tribute to the religious figure of St. Peter and others call it an egomaniacal and despotic act on the part of the Russian emperor.

Saint Petersburg is the second city of the country in population. The sometimes called “Venice of the north”, “Palmira of the North” or “second Russian capital” offers an architecturally inviting city centre; an UNESCO World Heritage Site. Its architecture includes baroque and the neoclassical masterpieces. Seventeenth-century Italian influences can be seen in many of its monuments, such as the Palace Square, with its Winter Palace, the building of the General Staff; St. Isaac’s Cathedral, the Cathedral of Our Lady of Kazan; the Admiralty building and the Cape of Vasilyvsky Island.

The best time to visit St. Petersburg is May, June and July, thanks to the magical white nights, a natural phenomenon, characteristic of areas close to polar circles, during this time of year, the sun remains on the horizon 19 hours a day including dusk. The merchant ships take advantage of the occasion, usually navigate the river from the Baltic Sea. The Neva river bridges, the merchant ships, the cafes and the streets full of people, add a bit of magic to the Russian sunset.

Months like December are the best to practice winter sports, autumn starts in September with wet days.

This is a list with the best areas to stay in St. Petersburg, Russia.

Keep in mind that accommodation prices may change on the eve of the World Cup, as the event approaches the rates may (and will) increase.

Tsentralny is, without a doubt is the best area to stay in St. Petersburg. Constituted by the greater part of the historical area, it borders Neva river and with the channel Obvodny.

It has become the most sought-after spot in St. Petersburg due to the number of monuments that it contains, its high number of restaurants and all its leisure options that make it great for any traveller.

Nesvky Avenue together with most of the attractions of the district constitute the best part of the historical-cultural heritage of St. Petersburg, so it is advisable to stay near or within Tsentralny.

Tsentralny is also the best connected area of St Petersburg, with several metro and bus lines reaching every corner of the city from here.

On the downside, Tsentralny can also be one of the most expensive areas to stay in Saint Petersburg, particularly during high season. 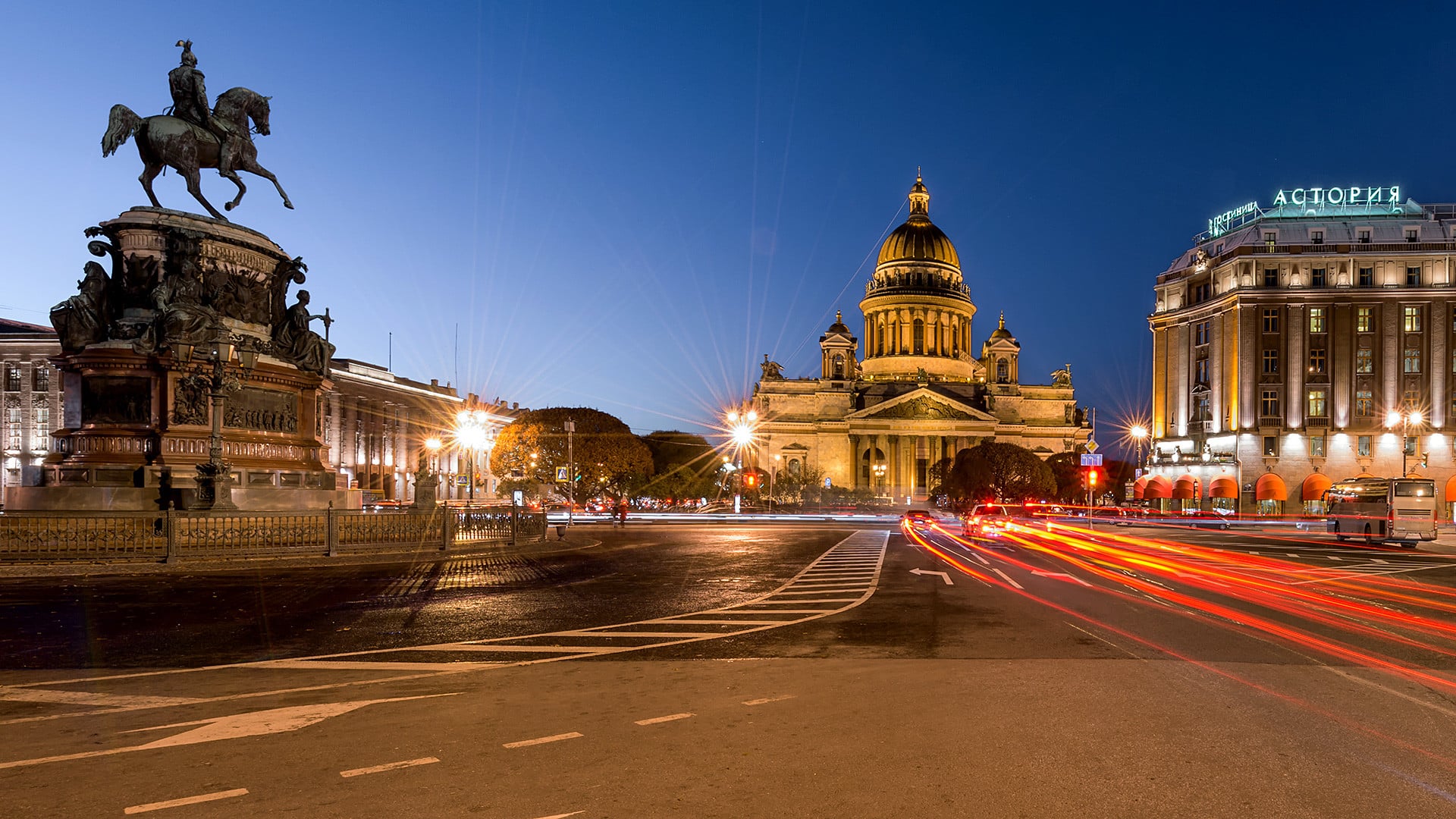 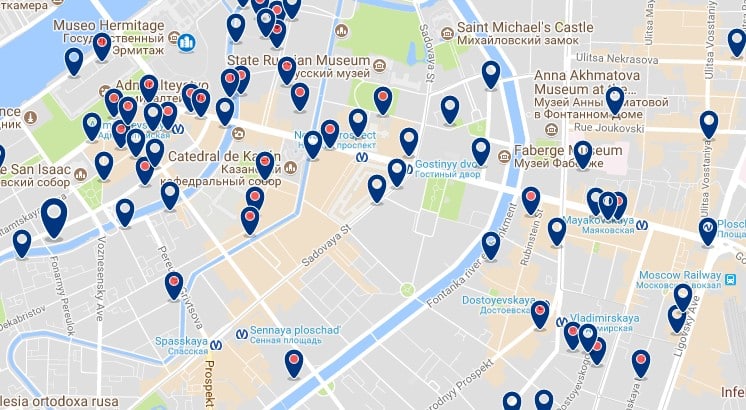 Almost at the top of the city, removed from the city centre, lies Krestrovsky; an islet sheltered by the rivers Srédnyaya Nevka, Málaya Nevka and Krestovka, all of them tributaries of the imposing Neva River.

Until a few years ago this was a rather unattractive point of the city, without many leisure options, food or accommodation. Today it enjoys a certain popularity among tourists and especially football fanatics, since it houses one of the most innovative and expensive stadiums in the world; the Saint Petersburg Stadium, a sample of the avant-garde future and technological advances augured for sport arenas.

Kisho Kurosawa, the famous architect responsible for its design, surpassed the expectations of the organizing committee of the 2018 FIFA World Cup by making a wonderful structure.

With an infrastructure similar to that of a spaceship, this modern room has a capacity close to 110,000 spectators, its retractable cover and the sliding field position it as the most modern of its kind and the most expensive arena in the world.

After the rise of the Confederations Cup, the World Cup and other events to be held on the island of Ketrovski, railway connections and transport links were improved. The Krestovski Óstrov metro station in St. Petersburg is only half an hour from the stadium, from which it is possible to travel to any corner of the city, it is a good area to stay especially for lovers of world-class sporting events such as the World Cup to be held in June.

Saint Petersburg Stadium – Click to see all hotels on a map

Admiralteyskiy, like Tsentralny, is one of the districts of the centre of St. Petersburg, covers the so-called secondary part of the historic centre where important monuments, entertainment centres and traditional food eateries are located.

Despite sharing the central area with Tsentralny, it is an extensive district made up of 6 small neighborhoods. One of them is Kolomna, which preserves a medieval atmosphere reflected in its squares and cathedrals, it is a good area to stay in St. Petersburg.

One of the reasons to stay at Admiralteyskiy is the Mariinsky theatre, named after the Empress Maria Alexandrovna and home of the famous Mariinsky Ballet and Opera Company. At present, it is still one of the most important ballet theaters in the world and a fundamental part of the tours in Saint Petersburg.

It is a good place to admire the aesthetic and cultured atmosphere of the Venice of the North, not all neighborhoods allow night walks and exhibit events of such importance as the Russian opera, recitals of illustrious ballet companies and symphonic concerts. 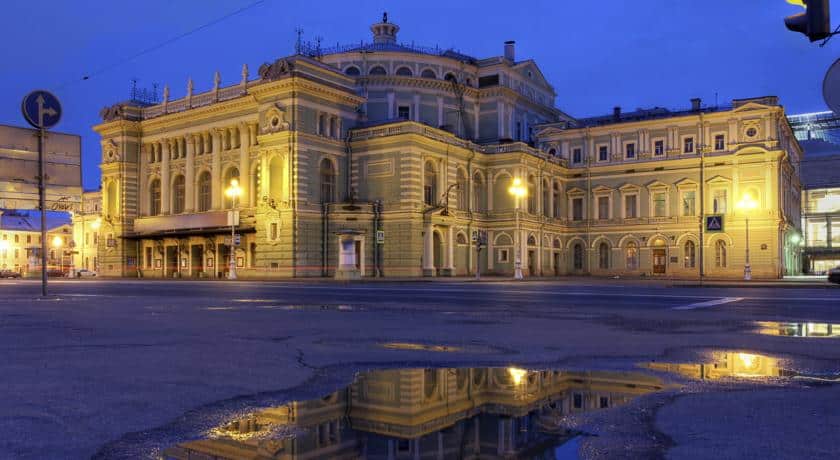 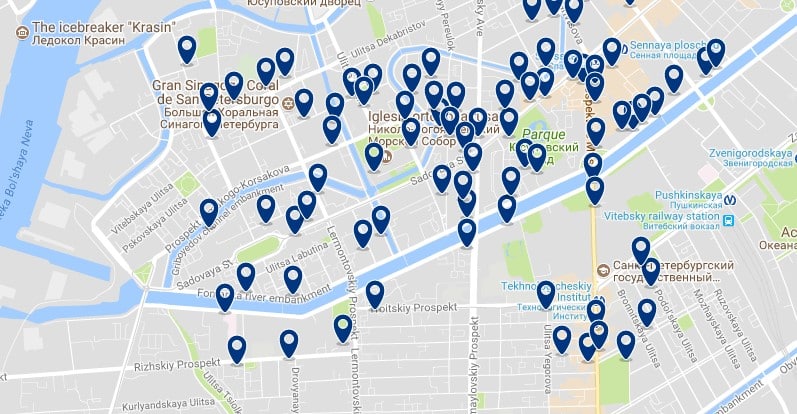 Moskovskiy is also known as the “southern gate of the city”.

Its name is given by its location, the presence of two important highways and the Pulkovo International Airport. Which makes it the best passage area in St. Petersburg, ideal for business travellers or those who wish to visit other cities of Russia such as its capital Moscow.

Undoubtedly the greatest activity of the district resides in the Moskovsky avenue or avenue to Moscow. The route crosses the Fontanka river, the Obvodny canal and the Ligovsky avenue nine and a half kilometers to the exit of the city at the monument to the Heroes of Leningrad. During the 18th century it was an area of war and conflict, but today it exhibits great monuments and intellectual centres of Russia such as the technological institute.

Some call it a district of Moscow located in St. Petersburg and others think otherwise, the truth is that despite remaining distant from the downtown area retains a particular charm with a much more affordable accommodation than Tsentralniy or Admiralteskiy districts.

Where to stay in St Petersburg, Russia – Moskovskiy 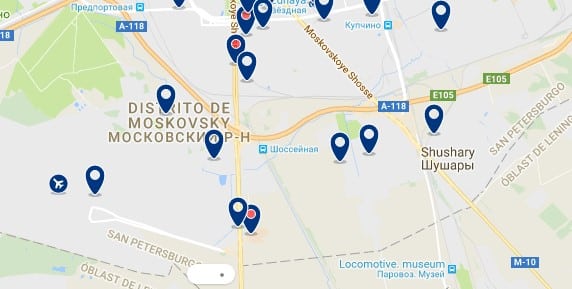 Saint Petesburg Moskovskiy – Click to see all hotels on a map

A few kilometers to the north from the central area, just at the far left of St. Petersburg, lies the district of Primorsky.

Of the 18 existing districts, Primorsky is the largest and most important for the geography of the city. It is considered an exclusive area due to its proximity to the Bay of Neva and its maritime views.

Unlike the other areas of the city, Primorsky does not stand out because of what to see or do, three hours distance it from the best attractions of St. Petersburg and the trip can become monotonous and boring without the proper itinerary.

The best area north of St. Petersburg is Lakhta-Olgino, years ago was a prosperous village known for its exclusivity and enjoy popularity among the nobility. At the moment it conserves certain attractiveness of the past with airs of the modern Russia.

It is a good area to stay in St. Petersburg, there is a wide range of hotels, apartments and hostels. 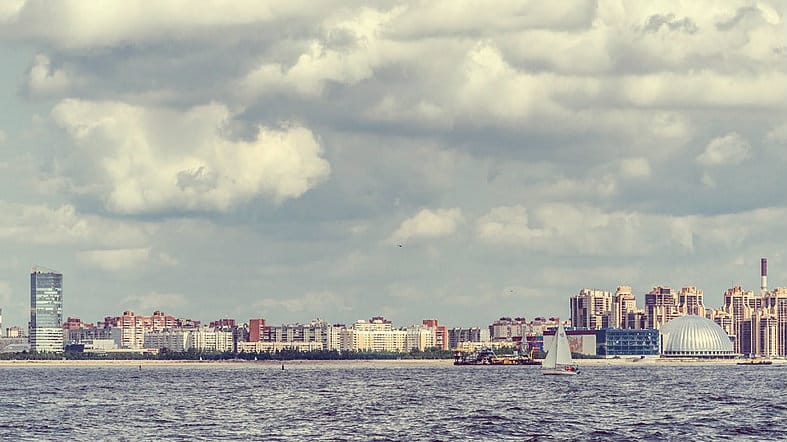 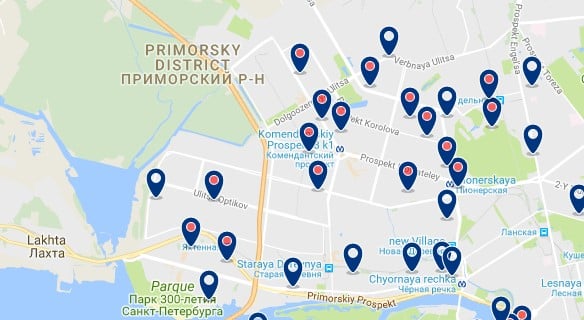 Saint Petersburg Primorsky – Click to see all hotels on a map

St Petersburg’s city centre has some cays and bays like Vasilyevsky and Dekabristov islands, both correspond to the district known as Vasileostrovskiy.

It is the best place to see the famous and extraordinary white nights, the summer dawn in St. Petersburg has a particular charm. Restaurants and museums are open almost 19 hours a day and the view over its six bridges make a unique show.

The metro stations make it easy to stay in Vasileostrovskiy, of course walking is also possible, just a few kilometers away lies the historic centre of the city and the best offer in bars and entertainment.

One of the greatest highlights in the area is the Museum Erarte, it exhibits the best collection of modern art in Russia, with almost 2300 works of 250 artists. And as if it were not enough, just a few steps away lies the first museum ever founded in Russia, the well known Kunstkamera 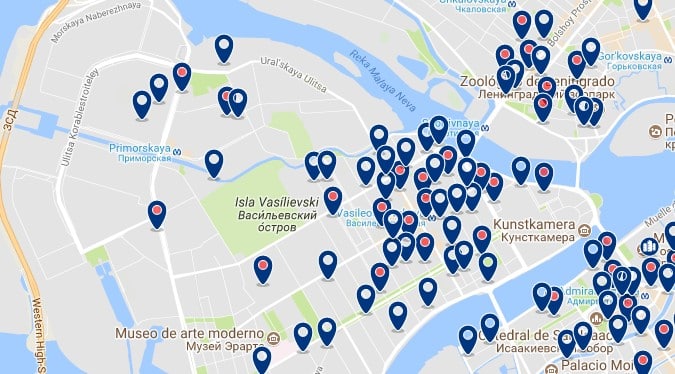 Vasileostrovskiy – Click to see all hotels on a map

This district dates back to the time of Peter the Great, rumors of conflict motivated him to build the famous fortresses of St Peter and St Paul, at that time Petrogradskiy was the center of operations of the illustrious Russian monarch. The area still retains many military monuments such as the Aurora and the Military Academy.

Currently, it is a listed area for commercial and residential goods, offers a comfortable atmosphere, ant it is an escape to the hectic city centre so it is St Petersburg’s prime location for vacation homes and tourist apartments.

Accommodation here is mainly represented by apartments and mini-hotels located on Bolshoy Avenue and the south of the island, around the War Museum. 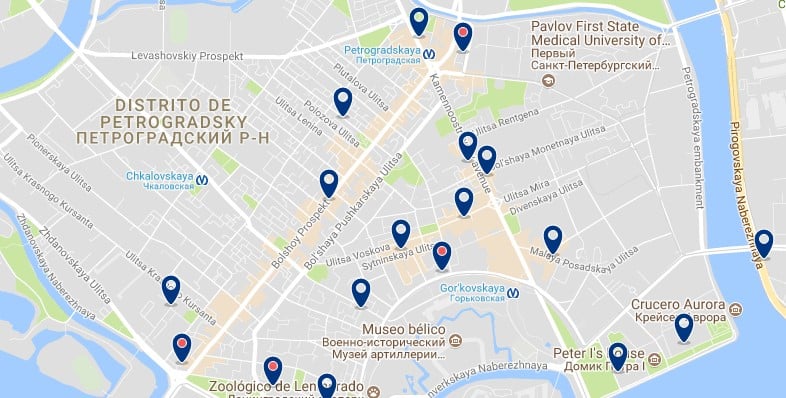 Petrogradskiy – Click to see all hotels on a map