Where to Stay in Cluj-Napoca – Best Areas and Hotels

Where to stay in Cluj-Napoca – What you need to know

Cluj-Napoca is also known as Kolozsvár in Hungarian or Klausenburg in German, although the vast majority of people knows it for its abbreviated version: Cluj. 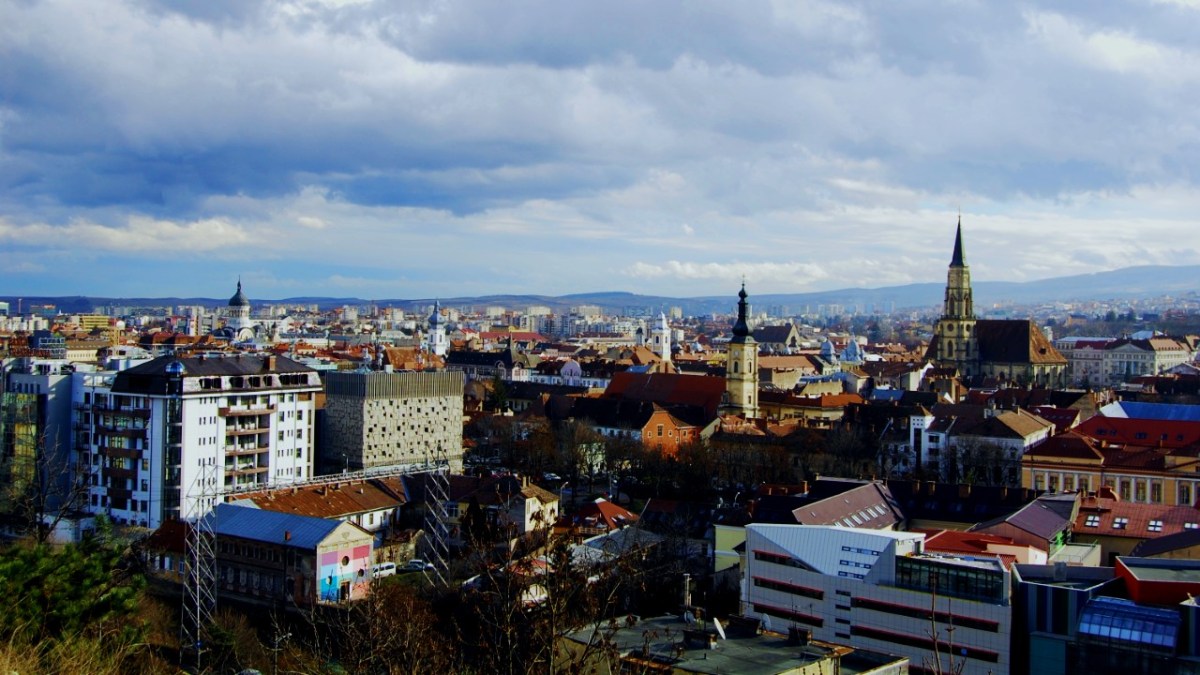 Where to Stay in Cluj-Napoca – Best Areas and Hotels

Located in north-western Romania, at a virtually identical distance from Bucharest, Belgrade and Budapest, this ancient city is the fourth largest in the country and the unofficial capital of the historical and cultural region of Transylvania.

Cluj-Napoca is located in the valley of the Somesul Mic River and, being the most important urban centre in Transylvania, it is the quintessential starting point for visitors who travel through this region of history and legends.

Among other institutions, Cluj-Napoca houses the Babes-Bolyai University, the largest in the country, as well as a European-renowned botanical garden.

Cluj-Napoca obtained the titles of European Capital of Youth in 2015, and European City of Sport in 2018.

The Cluj Avram Iancu International Airport, which serves the city and its surroundings, is the second most important in passenger traffic in the country, connecting the Transylvanian city with many cities in Western Europe, mainly through the low-cost airline Wizz Air.

Although it is a large city, its Old Town is easily travelled on foot. For the neighbourhoods farthest from the City Centre, there are several options: 3 tram lines, 6 trolleybus lines, and 21 urban bus routes.

As for the best areas to stay in Cluj-Napoca, without a doubt, the most recommended is the Old Town since it concentrates most of the city’s attractions. See accommodation in Cluj-Napoca’s Old Town.

If you are planning a route through Transylvania or Romania in general, the area near the train station is probably the best option. See hotels near Cluj’s train station.

Here’s a guide with the best areas to stay in Cluj-Napoca, Romania.

The best hotels to stay in Cluj-Napoca, Romania.

Looking for independence? Book an apartment in Cluj-Napoca.

Pensions, B&B and guesthouses in Cluj-Napoca.

The Historic Centre of Cluj-Napoca (Centru) encompasses the medieval city and concentrates most of the tourist attractions of Cluj.

Among the tourist attractions in this area, you’ll find the statue of Matthias Corvinus and the old St. Michael’s Church in the Piata Unirii, which is the heart of the city.

In this area, there is also the National Museum of Art, the Franciscan Monastery or the “mirror street” (Strada Iuliu Maniu), a unique architectural achievement dating from the late nineteenth century, in addition to the birthplace of Matthias Corvinus, a former 15th century hotel that now houses the Academy of Visual Arts.

To the southeast of Unirii is the Bastion of the Tailors, as well as a section of the old medieval wall.

The Museum Square, a 2-minute walk from Unirii, houses the Franciscan Monastery (a combination of Baroque and Gothic architecture dating back to the 14th century), the Transylvania Museum of History and the ancient Obelisk, offered to the city by the Austrian emperor Franz Ferdinand in the 19th century.

Being the heart of the city, the Old Town also has the largest variety of accommodation and a lively nightlife consisting of terraces, bars and some clubs.

The city’s main tram line connects the Old Town with the central station, and the area is also served by several electric trolleybus lines, as well as traditional buses.

The Old Town is the best area to stay in Cluj to discover the history of this interesting city.

Where to stay in Cluj, Transylvania – Centru or Old Town 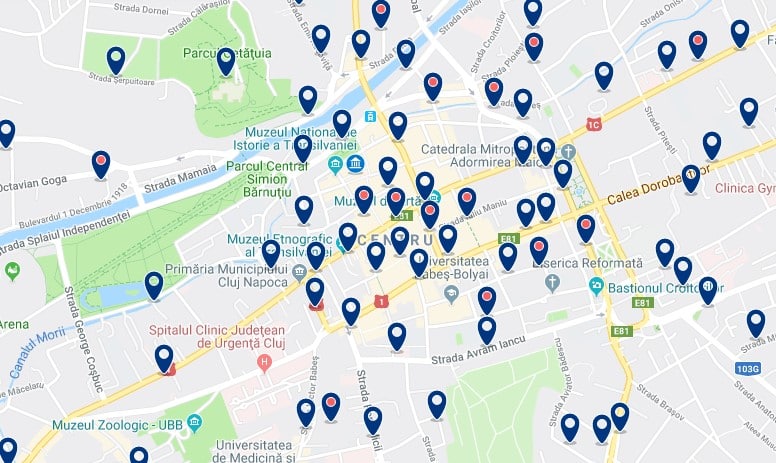 Cluj-Napoca – Centru – Click to see all hotels on a map

The Cluj-Napoca train station (Gara Cluj-Napoca) is the most important railway junction in the Romanian northwest.

It is located two kilometres north of Piata Unirii, on the northern shore of Somesul Mic.

Cluj-Napoca offers connections with most Romanian cities, as well as services to Budapest, Hungary and Vienna, Austria.

The area around the station is one of the best areas to stay in Cluj, especially for travellers who want to make a route through Transylvania, as it offers direct connections with cities such as Sighisoara, Brasov, Targu Mures or Sibiu.

Also, the surroundings of Gara Cluj-Napoca concentrate some of the cheapest accommodation options in the Romanian city, so if you are looking for economy or cheap hotels in Cluj, this is the best area to stay.

Best areas to stay in Cluj – Near the train stations 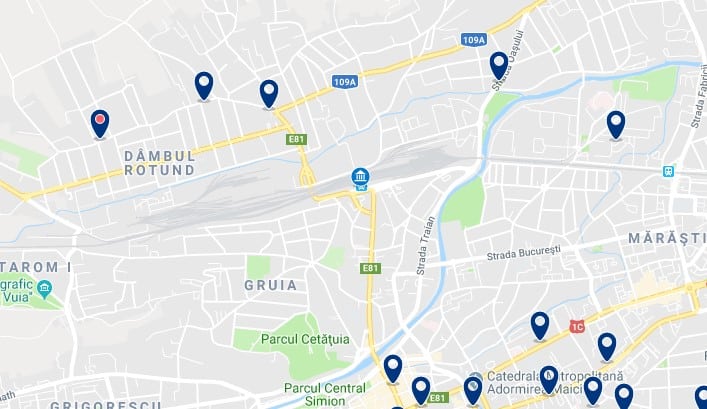 The Zorilor neighbourhood is located a few kilometres south of the City Centre.

This area is famous for hosting the Babes-Bolyai University Astronomical Observatory, which offers the best views of Cluj.

Zorilor is bounded by the beautiful Botanical Garden, the Hasdeu campus, the Manasytur cemetery, the Jewish cemetery, and the Buna Ziua neighbourhood.

Zorilor hosts renowned hotels, shopping centre and nightclubs, which is why it is considered the commercial and business heart of the city.

Being close to the university area of Cluj, Zorilor is a neighbourhood with a lively nightlife.

Zorilor is also home to the Sigma complex, which includes the Sigma Shopping Centre and the Sigma Business Centre. 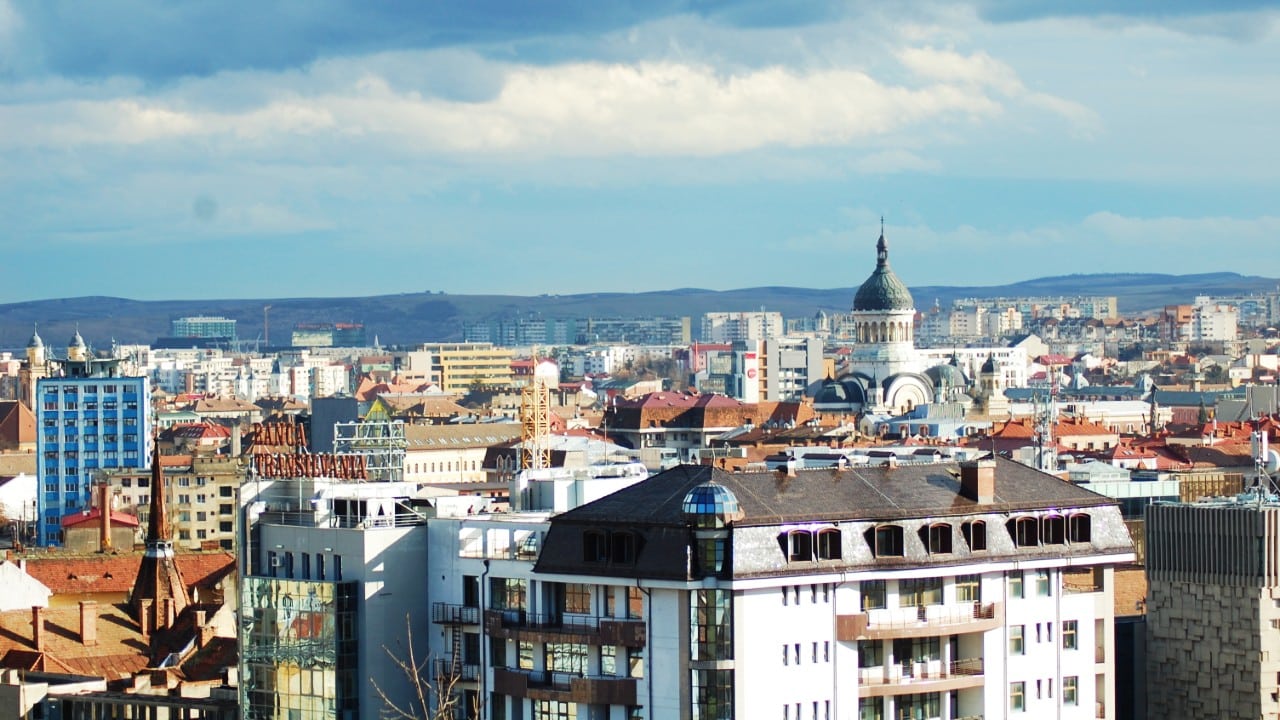 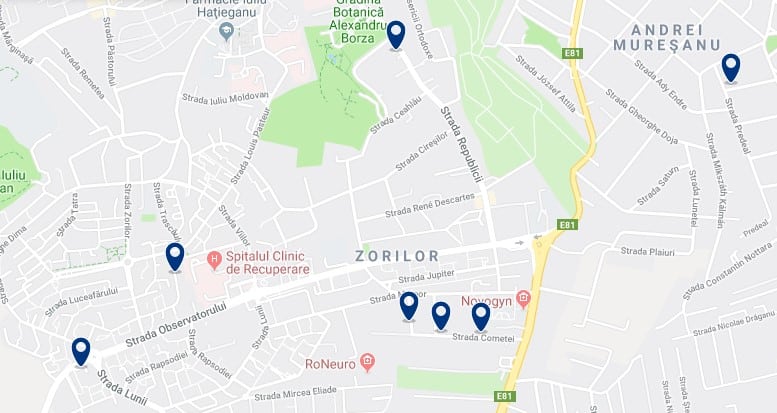 Cluj-Napoca – Zorilor – Click to see all hotels on a map

Gheorgheni and Între Lacuri are located southeast of Cluj-Napoca.

Între Lacuri (literally “between lakes”) is one of the oldest and most elegant neighbourhoods in Cluj, dominated by low houses with gardens and beautiful mansions converted into cafés and terraces.

On the other hand, the neighbouring district of Gheorgheni is the highest representation of the communist ideal. Built in the 60s, during the Ceausescu regime, Gheorgheni presents a profile of multi-storey concrete buildings around large green areas.

The confluence of both neighbourhoods is located around the Iulius Mall, which, with its 250 stores, is one of the largest shopping centres in Romania, as well as an important centre for leisure and business in the city.

This area of eastern Cluj is mainly accessible by bus.

The districts of Gheorgheni and Între Lacuri are excellent areas to stay in Cluj-Napoca.

Where to stay in Cluj-Napoca, Romania – Gheorgheni & Intre Lacuri 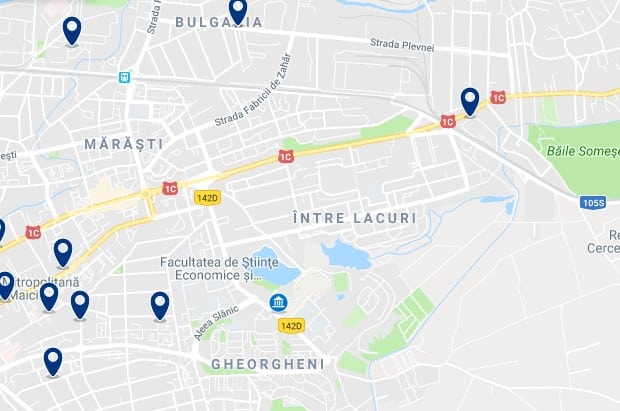 Best area to stay in Cluj-Napoca