Best Areas to Stay in Turin – Top Districts and Hotels

Where to stay in Turin – What you need to know

Turin, or Torino in Italian, is an important city located in northern Italy.

This city, capital of the Piedmont region, is, with Milan, one of the cultural, industrial and financial epicentres of continental Italy, as well as one of the most visited destinations in the Italian Alpine region. 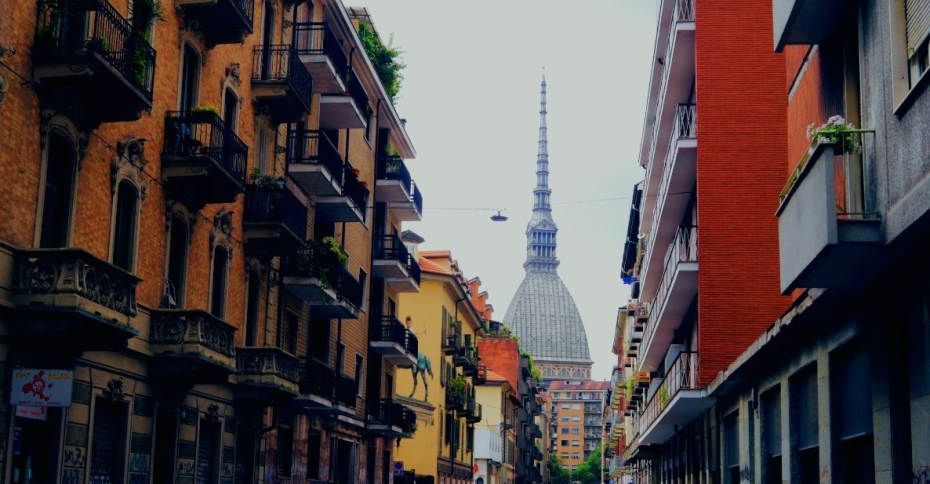 Best Areas to Stay in Turin – Top Districts and Hotels

Turin is located on the plain of the Po River, a short distance from the peaks of the Alps and the border with France and Switzerland.

The capital of Piedmont is a tourist destination all year round. While, in the winter, the city serves as the gateway to the ski slopes of the region, during the summer many tourists visit it to discover its historical-cultural patrimony and the great events of the season.

Turin is also an important centre of pilgrimage for Christians around the world since it houses in its cathedral the “Shroud of Turin” or “Holy Shroud”, which some believe is the piece of cloth used to wrap the body of Christ after his crucifixion.

Another type of pilgrims, in this case, sports, also flock to Turin to attend matches of its well-known football team, Juventus. The Juve is one of the Italian football teams with the most followers worldwide.

The best part of visiting Turin is that this city, while one of the most beautiful and culturally interesting in Italy, does not receive the hordes of tourists you can expect from places like Florence, Venice or Rome, so you don’t feel like you’re in a theme park.

Turin is an important railway centre in northern Italy. Its main station, Porta Nuova, offers direct connections to almost all major Italian cities, as well as international services to France.

To move within the city, the public transport system includes trams (the most convenient option for the central area), a metro system that connects the Porta Nuova station with some more peripheral areas, as well as buses and taxis.

In terms of climate, like much of Italy, the weather in this region is usually more stable at the end of spring and during the summer. The winters are cold, rainy and with occasional snowfalls, while, being in a fluvial plain, the summers can be quite hot.

As for the best areas where to stay in Turin, the best choice is definitely its historic centre since it is the most charming area and close to tourist attractions. See accommodation in Turin’s Centro Storico or Historic Centre. If you visit the city for a Juve game, then you should stay near the Allianz stadium. See accommodation near the Juventus stadium.

The best hotels to stay in Turin, Italy.

Looking for independence? Book an apartment in Turin.

Pensions, B&B and guesthouses in Turin.

The Historic Centre of Turin is located on the western bank of the Po River and hosts the main tourist attractions of the city.

Unlike the typical Italian medieval cities, which have a tangle of narrow streets that connect the main piazzas, the Centro Storico of Turin presents a fairly uniform grid layout that gives a feeling of order.

In spite of being a city whose history goes back to Celtic and Roman times, the true flowering of Turin took place during the Renaissance, which shows in its elegant appearance.

The Historic Centre hosts the main squares of the city, such as the Castello or the San Carlos, as well as the most representative palaces such as the Palazzo Reale, the Palazzo de la Madama or the Palazzo Carignano.

In the centre, you’ll also find the cathedral of Juan Bautista, home of the famous Shroud of Turin.

A few steps north of the cathedral are Porta Palatina and Piazza Cesare Augusto, which displays the Roman ruins of the ancient Augusta Taurinorum.

From a cultural point of view, the centre also hosts the city’s main museums, such as the cinema (located in the imposing building of the Mole Antonelliana), the Egyptian Museum or the Museum of Oriental Art.

For fashion lovers, Via Roma, which runs through the Historic Centre from Piazza Castello to Porta Nuova station, is one of the shopping avenues par excellence in Turin.

The Centro Storico is definitely the best area in Turin for its large number of tourist attractions, its museums and excellent transport connections.

Where to stay in Turin – Centro Storico 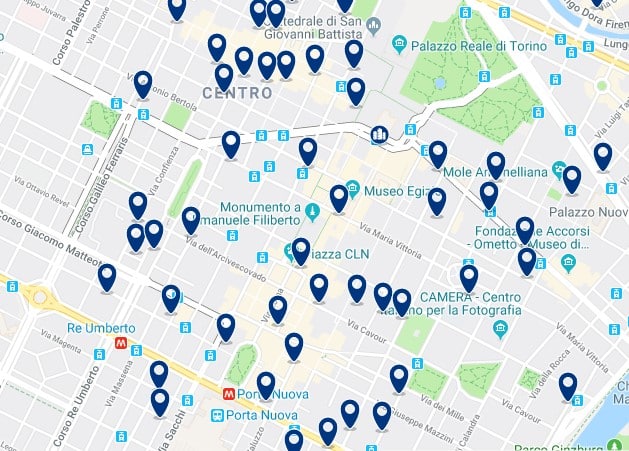 Turin – Historic Centre – Click to see all hotels on a map

San Salvario is a historic district located southeast of the historic centre of Turin.

In its eastern area is the Parco del Valentino or Valentino Park, the most famous park in Turin, along the left bank of the Po.

This park is considered one of the most beautiful in all of Italy for its location next to the river and the beautiful Castello del Valentino (Valentino Castle), a former royal residence of the Savoy declared a World Heritage Site by UNESCO.

San Salvario is one of the greenest central districts of Turin, and also one of the best-connected of the entire city. In its northern area, you’ll find the railway station of Porta Nuova, and the metro line M1 crosses the district with five stations.

This district is also known for the large multi-ethnic population, especially near and around Porta Nuova.

San Salvario is one of the best areas to stay in Turin for its excellent public transport connections, its central location and the beautiful Valentino Park. 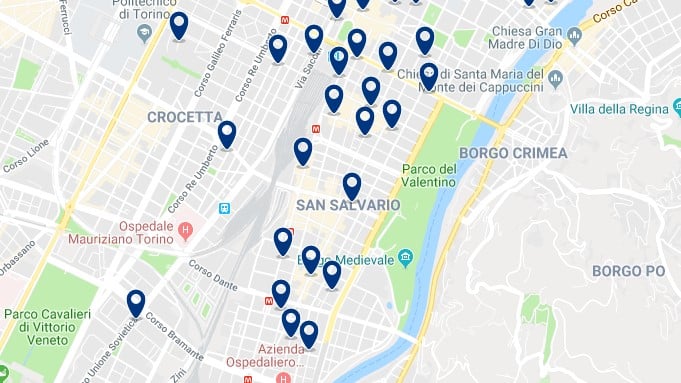 Aurora and Vanchiglia make up a lively district of Turin, located very close to the historic centre of the city, in its northeastern area.

This little town is famous for being the epicentre of the first wave of industrialization in Turin, in the middle of the 19th century.

Aurora extends to both banks of the river Dora and is characterized by several attractions such as the Balon, the most popular market in Turin, the Basilica di Maria Ausiliatrice, Porta Palazzo, Piazza Della Repubblica and the Railway Museum.

On the other hand, Vanchiglia occupies the strip of land near the confluence of the Po River and the Dora River. It is an area of ​​large parks such as Colletta or Crescenzio, in addition to the Campus Luigi Einaudi.

The area is connected to the city centre by several tram lines (3, 4 and 15) and the Torino Dora railway station in the Aurora area.

The accommodation in this area is also significantly cheaper than those in the Centro Storico, which makes the Aurora – Vanchiglia district one of the best areas to stay in Turin with a limited budget.

Turin – Aurora & Vanchiglia – Click to see all hotels on a map

Borgo Po is a district located near the centre of the city, on the eastern bank of the Po River.

While most of Turin is built on a plain, Borgo Po is in a mountainous area with steep hills.

The historic centre of Borgo Po is located on the north side of the famous Church of the Great Mother of God, built in 1831 by Ferdinando Bonsignore in a neoclassical style.

A little further south, you’ll find the famous Monte dei Cappuccini, on top of which is the convent of Santa María al Monte. The south wing of the complex is now the National Museum of the Mountain.

From the Monte dei Cappuccini, you can see spectacular views of the city of Turin and the surrounding mountains.

Borgo Po is a quiet neighbourhood, green and full of traditional houses and wooded areas, ideal for a quiet visit to Turin.

Turin – Borgo Po – Click to see all hotels on a map

La Crocetta is a district located south of the historic centre of Turin.

Historically, Crocetta has been one of the most prestigious residential areas of the city.

Originally, the village of Crocetta was located on the outskirts of Turin and developed mainly around the Beata Vergine delle Grazie church.

In addition to being the headquarters of the Turin Polytechnic, the Crocetta area hosts the Civic Gallery of Modern and Contemporary Art (GAM).

Other attractions in this area include: the “Liberty” pedestrian zone with its art-nouveau architecture, the Ospedale Mauriziano, the Spina Centrale and the igloo di Merz, as well as the Vittorio Emanuele II Monument

It is one of the best areas to stay in Turin since, although it is not as central as those described above, it is well-connected to the city centre by tram, metro and nearby Porta Nuova station. 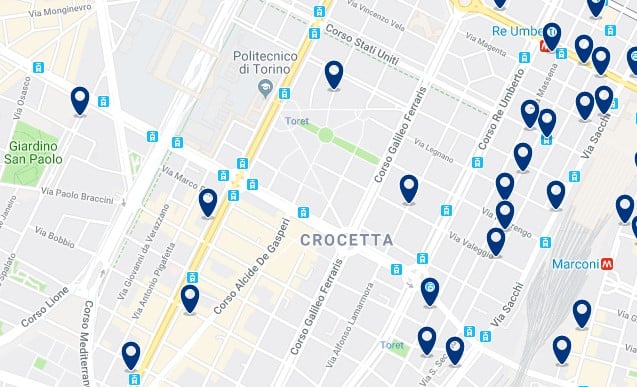 Turin – Crocetta – Click to see all hotels on a map

6. Near the Juventus stadium

It is located in the district of Vallette, north of the city and about 7 kilometres from the historic centre.

This Italian football temple, with a capacity for 41,000 spectators, is considered the first eco-friendly stadium in the world and one of the four Italian stadiums of UEFA category 4, the highest technical level.

The stadium, in addition to its sports facilities, also includes the J-Museum or Juventus Museum, a bilingual historical-sports museum dedicated to Juventus Football Club.

In addition, Juventus Football Club has its own hotel, the J Hotel, an accommodation that offers a luxury stay for authentic football fans.

The area of the Juventus stadium is connected by buses and the railway station Torino Rigola – Stadio.

The Juventus Stadium area is the best area to stay in Turin for football lovers and those who plan to attend a Juve match in Torino.

Where to stay in Turin – Near Juventus stadium 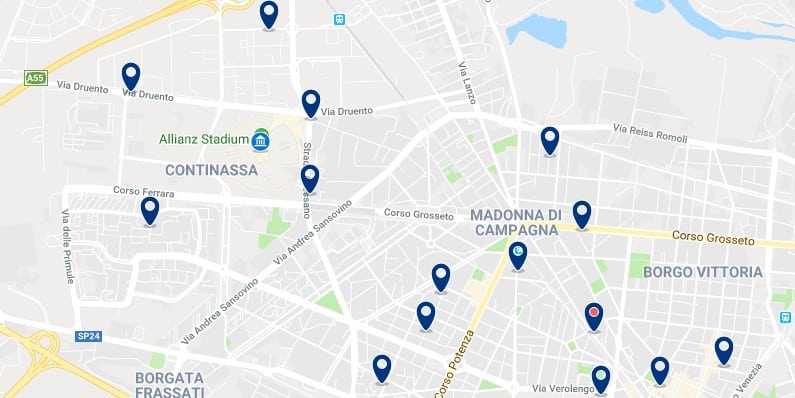 Best area to stay in Turin