Best Areas to Stay in Barcelona for Nightlife

Barcelona is one of the most visited destinations in Europe. From its modernist architecture, with landmarks such as the Sagrada Familia, to its gastronomy and multiple leisure alternatives, the capital of Catalonia has something to offer for all types of travellers.

As far as nightlife is concerned, this city does not fall short in options. Partying in Barcelona allows you to get a more complete idea of what day-to-day life is like in the city, and to know its different facets. 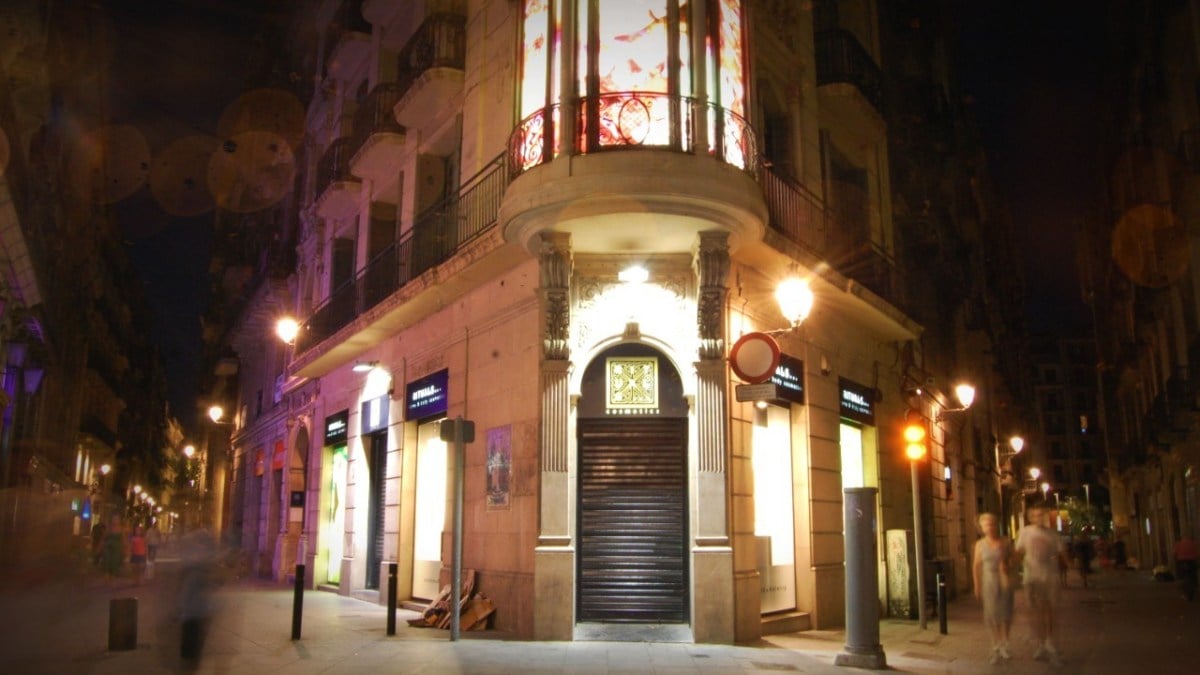 Best Areas to Stay in Barcelona for Nightlife

If you plan to travel to Barcelona to go clubbing, you have to know that, as in the rest of Spain, the party starts well into the night, so getting to the bar early means that you will probably be alone at the bar.

In the same way, you must choose wisely between the best areas to stay in Barcelona to be near the clubs you want to visit, save time and money in taxis or public transport.

For example, if you want to know the alternative scene of Barcelona, staying at the Ciutat Vella, especially in the surroundings of the Raval, is a good option for you. On the other hand, the Eixample has the most varied nightlife in the Catalan capital, including gay clubs and bars.

In this article, we will discuss the best areas to stay in Barcelona for nightlife according to your partying preferences. In the same way, we will mention historical venues, bars and nightclubs that you can not miss in each area of Barcelona.

Here’s a list with the best neighbourhoods and areas to stay in Barcelona for nightlife.

Where to stay in Barcelona for nightlife

The Ciutat Vella (which means “Old City” in Catalan) is the most historic area of ​​Barcelona, ​​where you can find neighbourhoods as representative of the city’s past as the Raval, Barri Gòtic or Gothic Quarter and the Born.

This district of narrow streets has the most central location of Barcelona and houses hipster and alternative bars, with interesting proposals that are very different to those in the modern neighbourhoods of the city.

Although Ciutat Vella is more about bars than clubs, it is still one of the best areas to stay in Barcelona for nightlife because of its precopeo venues where you can start the night early with just a few “pre-drinks”, as well as tapas, hybrids of bars and clubs, and some proper clubs.

In addition, around the Raval, there are some gay or gay-friendly bars, the most alternative nightclubs in the area, and authentic ethnic restaurants.

The Ciutat Vella connects with the rest of the city through lines 1 (Catalunya, Urquinaona, Universitat), 2 (Paral.lel, Sant Antoni, Universitat), 3 (Catalunya, Liceu, Drassanes) and 4 (Urquinaona, Jaume I) of the metro, so you can start here with a few beers and then move on to the clubs of other districts of Barcelona, ​​if you want to.

Keep in mind that the metro is open 24 hours during the weekends. 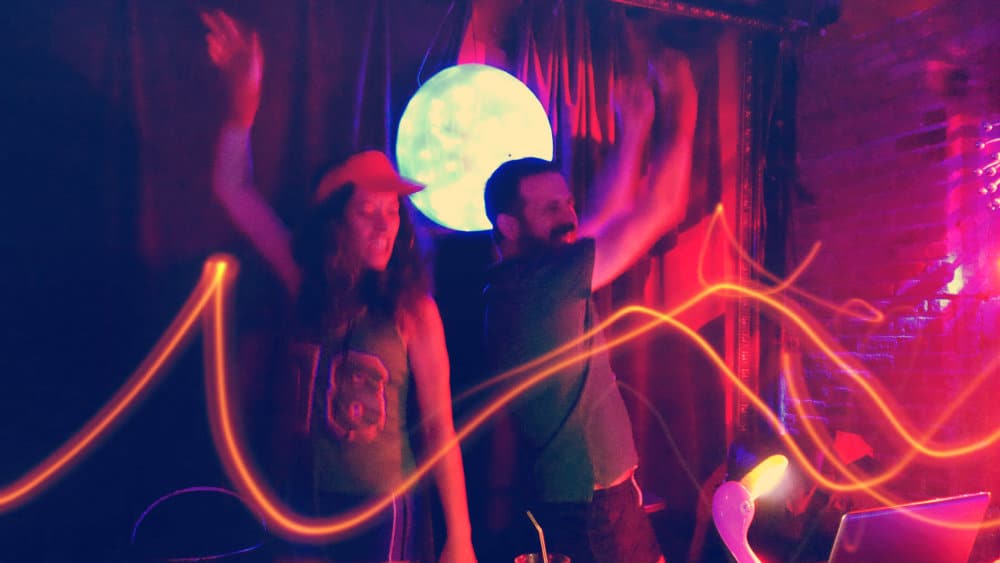 Best areas to stay in Barcelona for nightlife – Ciutat Vella

The comfortable Petit Palace Boqueria Garden is located in a historic 19th-century building next to the La Boquería market, it is 10 metres from Las Ramblas, offers free high-speed Wi-Fi, and has iPads and free bicycles (subject to availability).

from €99
BOOK NOW
SEE ALL HOTELS IN THIS AREA

2. Port Olympic – For the international flavour

The Port Olympic area was built for the Olympic Games in 1992 and differs from the Ciutat Vella for its contemporary architecture, with buildings such as the Mapfre Tower and the Hotel Arts that are icons of Barcelona.

This marina, located between the beaches of Nova Icària and Barceloneta, is currently one of the main tourist centres of Barcelona.

In this area, there is always something to do. You can either go shopping in its shopping centres and stores, try the best seafood in its restaurants or just take a romantic walk through the harbour at sunset.

The nightlife of Port Olympic is among the liveliest in Barcelona. Because it is such a touristic place, it has a great variety of nightclubs and bars that are visited by people from all over the world, regardless of the season.

Port Olympic is one of the best areas to stay in Barcelona for nightlife because of its welcoming venues and music variety. However, it must be taken into account that partying in this district is more expensive than in other districts of the city.

Port Olympic connects with the rest of the Catalan capital by line 4 of the metro (Ciutadella-Vila Olímpica) and by tram. 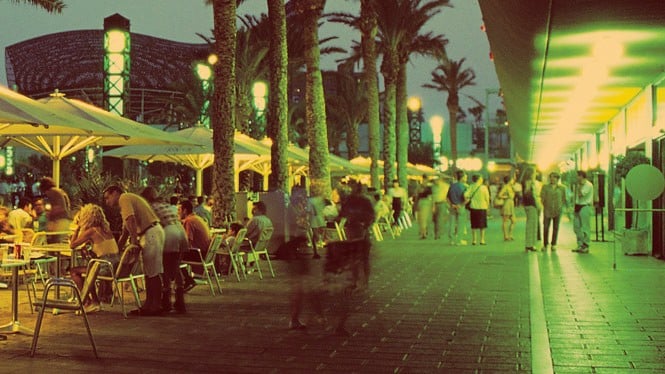 Port Olimpic – Best areas to stay in Barcelona for nightlife

The modern Hotel SB Icaria Barcelona is located 300 metres from Nova Icaria Beach in Barcelona, it offers a gym, sauna and outdoor pool with sun terrace and hot tub. The rooms have free Wi-Fi access and a flat-screen satellite TV.

from €84
BOOK NOW
SEE ALL HOTELS IN THIS AREA

3. Eixample – A bit of everything & gay area

Eixample comprises the area of ​​the city with almost perfectly symmetrical grid-shaped streets. This district is structured around the Gran Vía de Les Corts Catalanes and Diagonal Avenue.

This district is located north of the Ciutat Vella and is considered the gay area of ​​Barcelona par excellence, with bars and clubs for the LGBT community, which has earned it the nickname of “Gayxample”.

However, the Eixample has nightlife options for all types of visitors since it is one of the areas with the most variety in terms of theme parties, bars, clubs and afterparties.

In the Eixample, you can dance to the rhythm of Latin music such as salsa or bachata or move to the beat of the latest pop, electronic and urban genres such as hip hop.

Therefore, the Eixample is the best area to stay in Barcelona for nightlife for those looking for a variety of musical styles or groups of friends. In addition, staying in the Eixample allows you to be close to attractions such as the Sagrada Familia.

The Eixample connects with other districts of the Catalan capital through lines 1, 2, 3, 4 and 5 of the metro.

Eixample – Best areas to stay in Barcelona for nightlife

The well-located Leonardo Hotel Barcelona Gran Via is located in Barcelona’s Eixample district, next to Plaza de España and a 5-minute walk from Fira Exhibition Centre. The city centre and Plaça de Catalunya are 5 metro stops away.

from €89
BOOK NOW
SEE ALL HOTELS IN THIS AREA

Poblenou is located west of Barcelona and, although in the past it was, mainly, an industrial area, it is currently one of the most trendy districts of the capital of Catalonia.

This district next to the beach is home to one of Barcelona’s best known and most iconic music venues: Razzmatazz.

Razzmatazz is a concert hall and club, where artists as important as Coldplay, Morrissey and Kanye West have performed.

Therefore, Poblenou is one of the best areas to stay in Barcelona for nightlife and concerts.

In addition to Razzmatazz, Poblenou has classic tapa bars and craft beers, restaurants and horchaterías, shops devoted to horchata, a drink with a milk-like consistency that is made out of chufas (yellow nutsedges) and is great to recover from a hangover on hot summer days.

Poblenou connects with the other areas of Barcelona by tram and by line 4 of the metro.

Best areas to stay in Barcelona for clubbing – Poblenou

The minimalistic Hotel & Spa Villa Olimpica Suites is located in the Poble Nou district of Barcelona, a 15-minute walk from Bogatell beach. The property has a seasonal outdoor pool surrounded by lovely wooden decks and sun loungers.

from €74
BOOK NOW
SEE ALL HOTELS IN THIS AREA

5. North of Diagonal Avenue – For the upper-class treatment

To the north of Diagonal Avenue, there are some of the most exclusive clubs and bars in Barcelona, ideal for those who want to know the most luxurious side of the city.

The clubs in this usually have a dress code, so it will be necessary for you to get a good pair of shoes if you want to party in this area of Barcelona.

After all, it is not unusual to meet celebrities while clubbing in this part of the city.

To the north of Diagonal Avenue, there are also some shopping centres and tourist attractions such as the Palau Reial, making it a good area to stay in Barcelona for nightlife and sightseeing.

This area is also relatively close to the Camp Nou and connects with the main districts of Barcelona through line 3 of the metro.

Hand-picked hotels to the north of Diagonal Avenue

The NH Barcelona Les Corts is located a 5-minute walk from the Les Corts metro station, it offers modern accommodation in Barcelona. It has good access to the main places of interest in the city, such as the Camp Nou.

from €99
BOOK NOW
SEE ALL HOTELS IN THIS AREA

Poble-sec belongs is part of the Sants-Montjuïc district and is located south of the Ciutat Vella. Today, it is a neighbourhood in full swing, with many bars and a relaxed atmosphere that is especially attractive for those seeking to get away from the most touristic areas.

Poble Sec stands out in a special way for its devotion to tapas. In the streets of this charming neighbourhood, you can find delicious croquetas, toasts, ham and Spanish tortillas that are usually accompanied by beer, wine or sangría.

Poble Sec is the home of the Sala Apolo, an old theatre converted into a nightclub and concert hall where events with different themes take place almost daily.

This area is also very hipster-friendly, as it has alternative style bars with affordable prices that blend with its typical Barcelona neighbourhood vibe and create an interesting contrast.

Poble-sec is among the best areas to stay in Barcelona for nightlife and is connected by lines 1, 2 and 3 of the metro.

Poble Sec – Best areas to stay in Barcelona for nightlife

The One & Only is located 1.9 km from the Magic Fountain of Montjuic, it offers air-conditioned accommodation with a balcony and free WiFi.

from €94
BOOK NOW
SEE ALL HOTELS IN THIS AREA

Best areas to stay in Barcelona for nightlife