Best Areas to Stay in Atlanta: Top Districts and Hotels

Where to Stay in Atlanta – What You Need to Know

Atlanta is the capital of Georgia, located in the southeastern area of the United States.

This city is known mostly for being an important business destination, with office complexes that house large American companies such as Coca-Cola and CNN, to name just a few, as well as for hosting many congresses every year.

Atlanta has the busiest airport in the world, the Hartsfield-Jackson Atlanta International Airport, which is the main hub of Delta Airlines, with an impressive number of domestic and international connections.

While it is true that Atlanta is often associated with modern, business-type hotels and glass skyscrapers, it also has a small but significant group of historical attractions and areas that make it a progressive oasis within the ultraconservative south of the US.

Among the things to see in Atlanta are the Martin Luther King Jr. National Historic Site, which includes a guided tour of the birthplace of the leader of the United States Civil Rights Movement.

Other unmissable attractions of this city are the Georgia Aquarium, the High Museum of Art, the Atlanta Botanical Garden, the Atlanta History Center and the Centennial Olympic Park, built for the 1996 Olympic Games.

When moving within the city, you can choose between a light rail system called MARTA for its acronym, buses, tram and taxis that connect all of its areas.

Among the best areas to sleep in Atlanta, the Midtown stands out for its vibrant cultural movement and variety of hotels (See hotels in Midtown Atlanta). On the other hand, Buckhead is the most exclusive district of the city and a good place to stay in Atlanta if you want to know its most luxurious side (See accommodation in Buckhead).

Here’s a guide with the best areas to stay in Atlanta, Georgia.

The best hotels to stay in Atlanta

Hostels and cheap stays in Atlanta

Would you like independence? Book an apartment in Atlanta

Inns, B&Bs and guest houses in several areas around Atlanta

The best areas to stay in Atlanta

Midtown is the best area to stay in Atlanta for being home to important cultural attractions such as the High Museum of Art, the Museum of Design Atlanta (MODA) and the former home of Margaret Mitchell, the author of the famous 1936 novel “Gone with the Wind.”

It is in the Midtown that the gay area of ​​Atlanta is located, with pubs and club for the LGBT community that, combined with the comedy bars and theaters of Peachtree Street, make this district one of the liveliest in the city.

This area has a very central location but without the chaos, hustle, and bustle there may be in Downtown Atlanta. In addition, it is very close to attractions such as the Botanical Garden or Piedmont Park and has MARTA (light rail) stations that make it easier to move to other districts or neighborhoods.

While it is true that accommodation in the Midtown Atlanta is not exactly the cheapest, the area has hotels of all kinds, so you can find good deals if you look well in advance.

Midtown is also one of the best areas to stay in Atlanta for shopping, as there are department stores and boutiques scattered throughout the district.

Where to stay in Atlanta – Midtown

Atlanta – Midtown – Click to see all hotels on a map

Downtown Atlanta is the city’s Central Business District and, therefore, houses most of its skyscrapers and business complexes.

This area is the heart of Atlanta and has the best public transport connections in the city, including multiple MARTA stops to move to the other neighborhoods and districts.

Among the attractions worth visiting in the Downtown is the Skyview Atlanta, from which you can get great views of the city, the Centennial Olympic Park, the Georgia Aquarium and the CNN headquarters, which offers tourist tours.

In this area, there is no shortage of options in terms of gastronomy and nightlife, with restaurants of different categories, bars, cafes, and clubs.

In addition, Downtown is a great place for photography lovers since it is the main location for a lot of shoots.

Downtown is the best area to stay in Atlanta for its wide variety of accommodations, including business and luxury hotels. 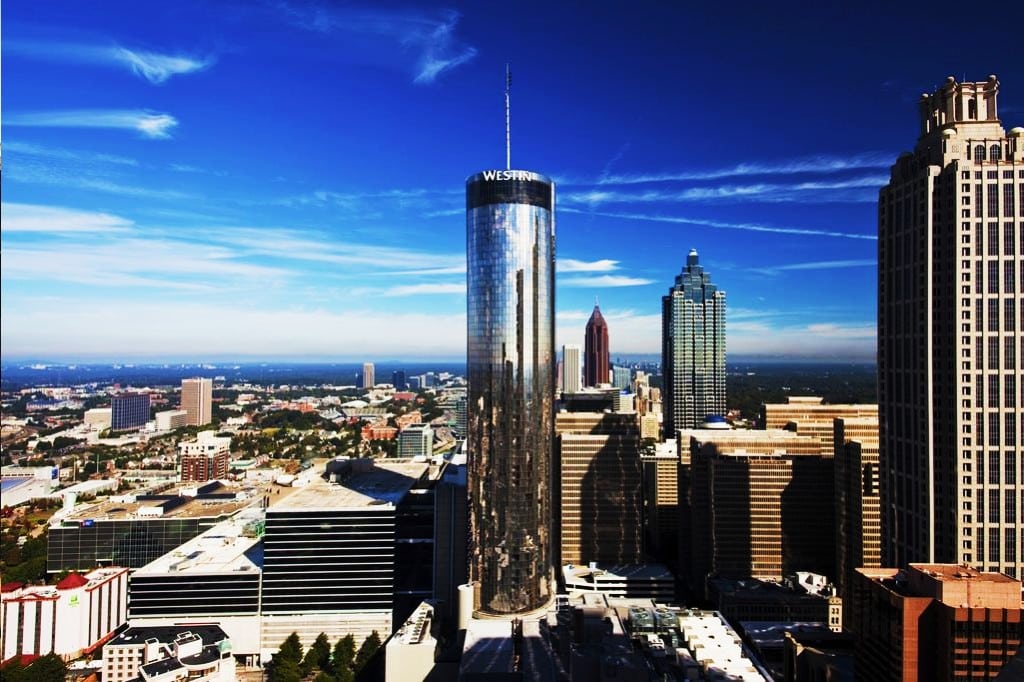 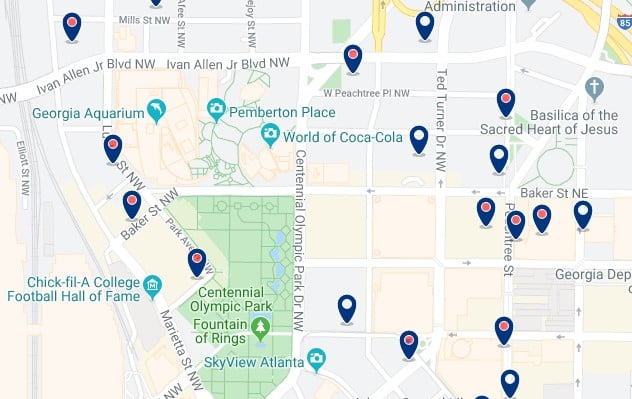 Atlanta – Downtown – Click to see all hotels on a map

What makes this a great area to stay in Atlanta Georgia

Buckhead and North Atlanta gather some of the city’s most luxurious hotels, shopping centers, and restaurants.

This is the perfect place to stay in Atlanta if you want to know the most exclusive and sophisticated facet of the capital of Georgia, so it is also necessary to have a bigger budget to book hotels in this area.

In Buckhead, there are attractions such as the Atlanta History Center and its Swan House, a spectacular mansion in the neoclassical style that appears in several scenes of The Hunger Games saga.

North Atlanta also stands out for its parks and green areas that create an interesting contrast with its buildings and give a sense of tranquility that is difficult to find in areas such as Downtown Atlanta.

In addition, Buckhead has MARTA stations that allow you to visit the rest of Atlanta, as well as fast-food restaurants and bars along Peachtree Road and Roswell Road NE. 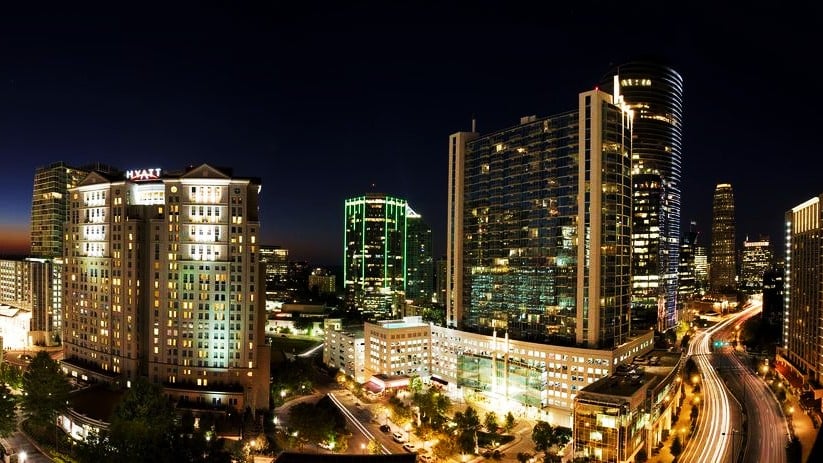 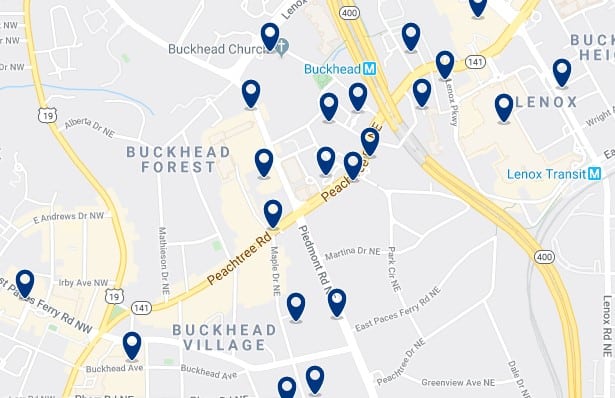 Atlanta – Buckhead – Click to see all hotels on a map

The Cobb Galleria Centre is one of the most important conventions and conference centers in the city, so its surroundings are a good option to stay in Atlanta for business travelers.

The Cobb Galleria is located northwest of Buckhead and, although it is far from Downtown, Midtown, and the central areas, it borders some bus stops that connect it with the rest of the city.

Near the Cobb Galleria, there are many department stores, restaurants, business-type accommodations, and cheap hotels to stay in Atlanta.

In addition, there are attractions in the area such as the Cobb Energy Performing Arts Center, where ballet, opera, and concert performances are held regularly.

Being a convention center with such relevance, this is one of the best areas to stay in Atlanta for business travelers.

Where to stay in Atlanta – Near Cobb Galleria Centre 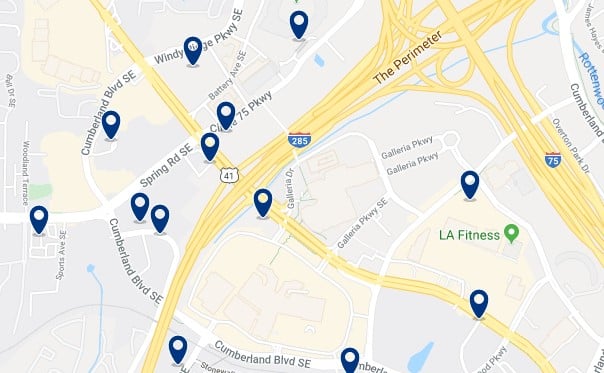 Atlanta – Cobb Galleria – Click to see all hotels on a map

Although Perimeter Center is not officially part of the city of Atlanta, it is in its metropolitan area located north of the City Center, at the GA 400 and Interstate 285 interchange.

In Perimeter Center, there are many cheap and comfortable motels that make it one of the best areas to stay in Atlanta for those who travel by car through the United States.

This area does not have many attractions, but it has the Perimeter Mall, one of the largest shopping centers in Atlanta, with many department stores, fashion boutiques, and restaurants.

On the other hand, although it is far from most of Atlanta’s attractions, it has some MARTA stations that allow you to move to the Downtown and other places in the city easily. 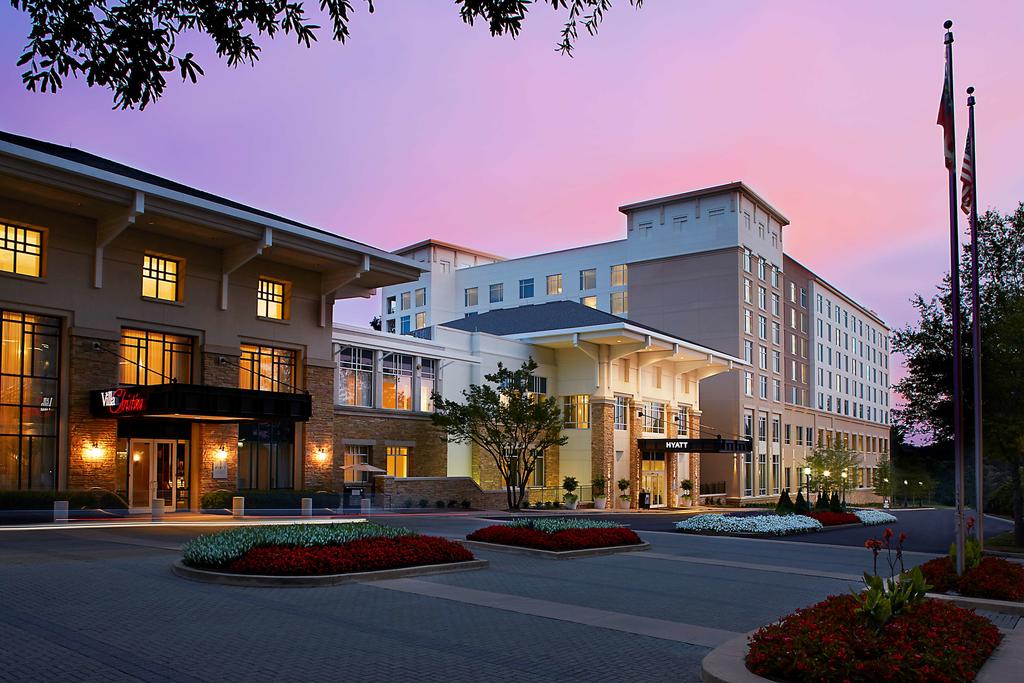 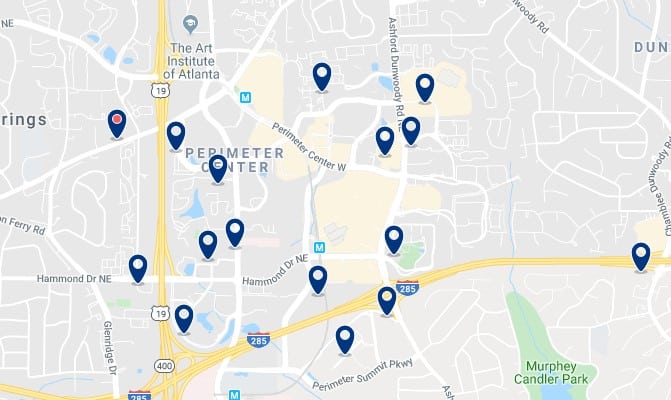 Atlanta – Perimeter Center – Click to see all hotels on a map

What makes this a great area to stay in Atlanta, GA

Staying near the Atlanta International Airport is an excellent idea for business travelers who visit the city for a short time and have an early flight.

The accommodation around Hartsfield-Jackson Atlanta International Airport is varied.

Here, business hotels stand out, but you can also find some luxury hotels and some cheap motels.

Similarly, the airport has the Delta Flight Museum, with interactive exhibits and vintage aircrafts belonging to this important airline.

The airport is far from Downtown, but it is one of the few air terminals in the United States that is connected by the metro to the rest of the city.

In the area, there are also restaurants of different ranges and bars.

Where to stay in Atlanta, Georgia – Near the airport 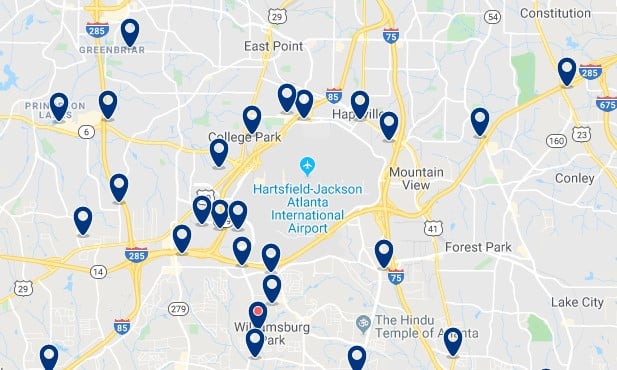 Atlanta – Airport – Click to see all hotels on a map

College Park is a city that belongs to Fulton and Clayton counties, located south of Atlanta.

However, College Park deserves a mention within the best areas to stay in Atlanta for offering a quiet residential environment, full of parks and green areas that are ideal for travelers seeking peace during their stay.

Likewise, College Park also offers much cheaper accommodation, making it a good place to stay in Atlanta for tourists on a tight budget.

On the other hand, another of the great advantages of College Park is its proximity to the Hartsfield-Jackson Atlanta International Airport, allowing travelers on a layover to move to the air terminal quickly. It is also ideal for those who need to catch an early flight.

In addition, College Park is an area connected by public transportation. 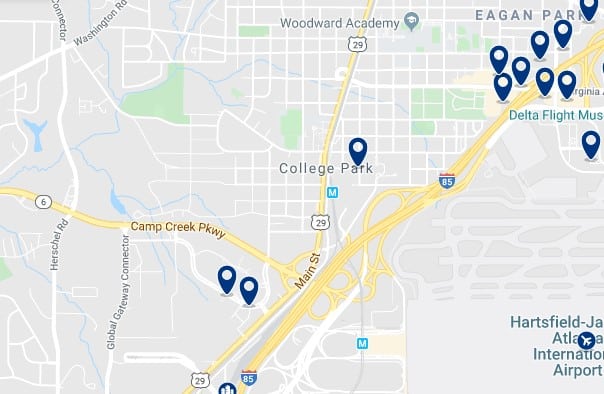 Atlanta – College Park – Click to see all hotels on a map

What makes this a great area to stay in Atlanta